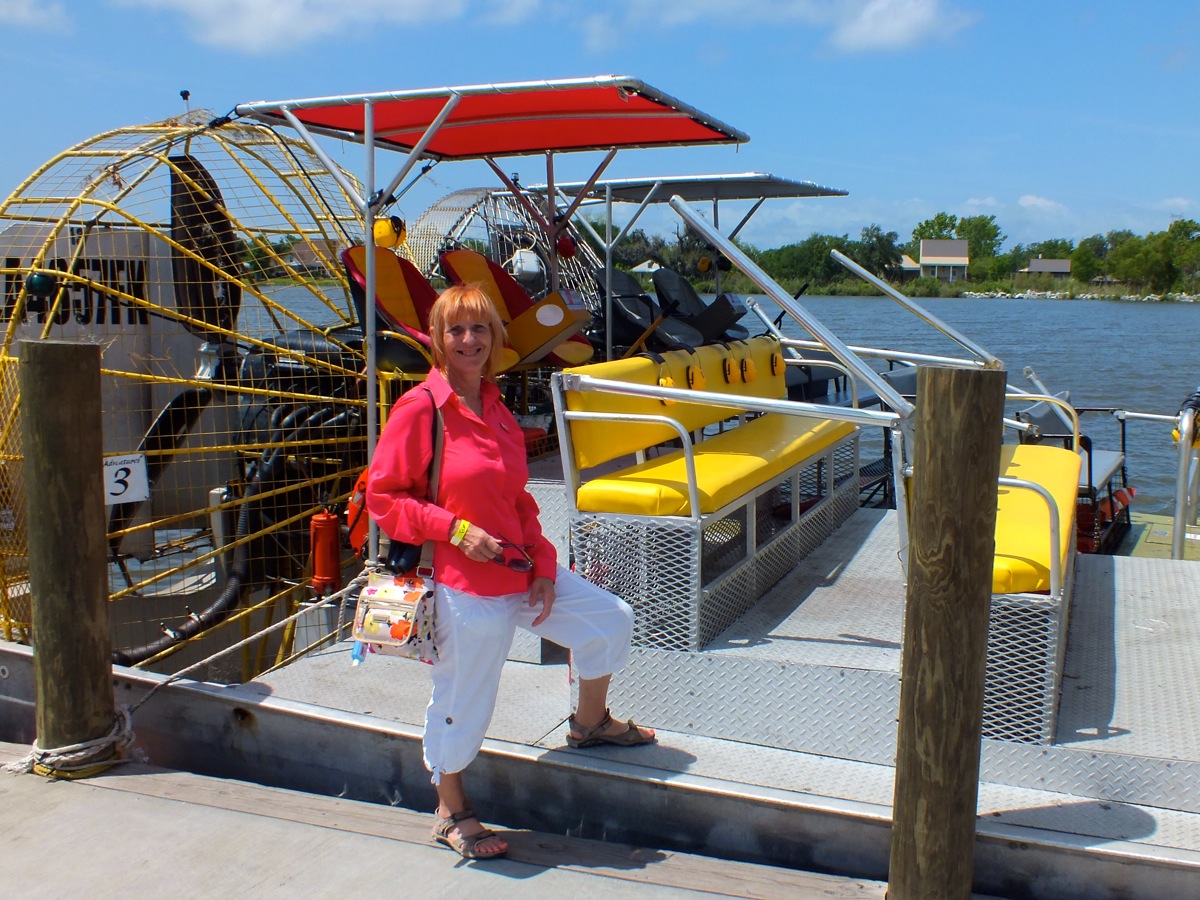 Another action packed day. Off on an airboat swamp tour and then a stroll around the Barataria Park park of the Jean Lafitte National Park.

Get to see an Albino crocodile. In captivity as it would not survive in the wild – no camouflage. Also get to see Albino fire engines, They’re all white, freaky, now there’s a first.

It’s a 2 hour tour all very interesting. Before we start, what does raw chicken, human fingers and marsh mellows have in common? Answer: Alligators love them. Don’t ask how they discovered the passion for marsh mellows!

Our guide throws marsh mellows and the gators come. Interesting tour but the gators are no where near as impressive as those we saw in the Everglades, but at least we got to hold one, poor thing was terrified and peed itself – mind you some of us weren’t so comfortable. Make a lovely pet this ones just 2 years old and will easily grow to 5 foot by the time it’s 5 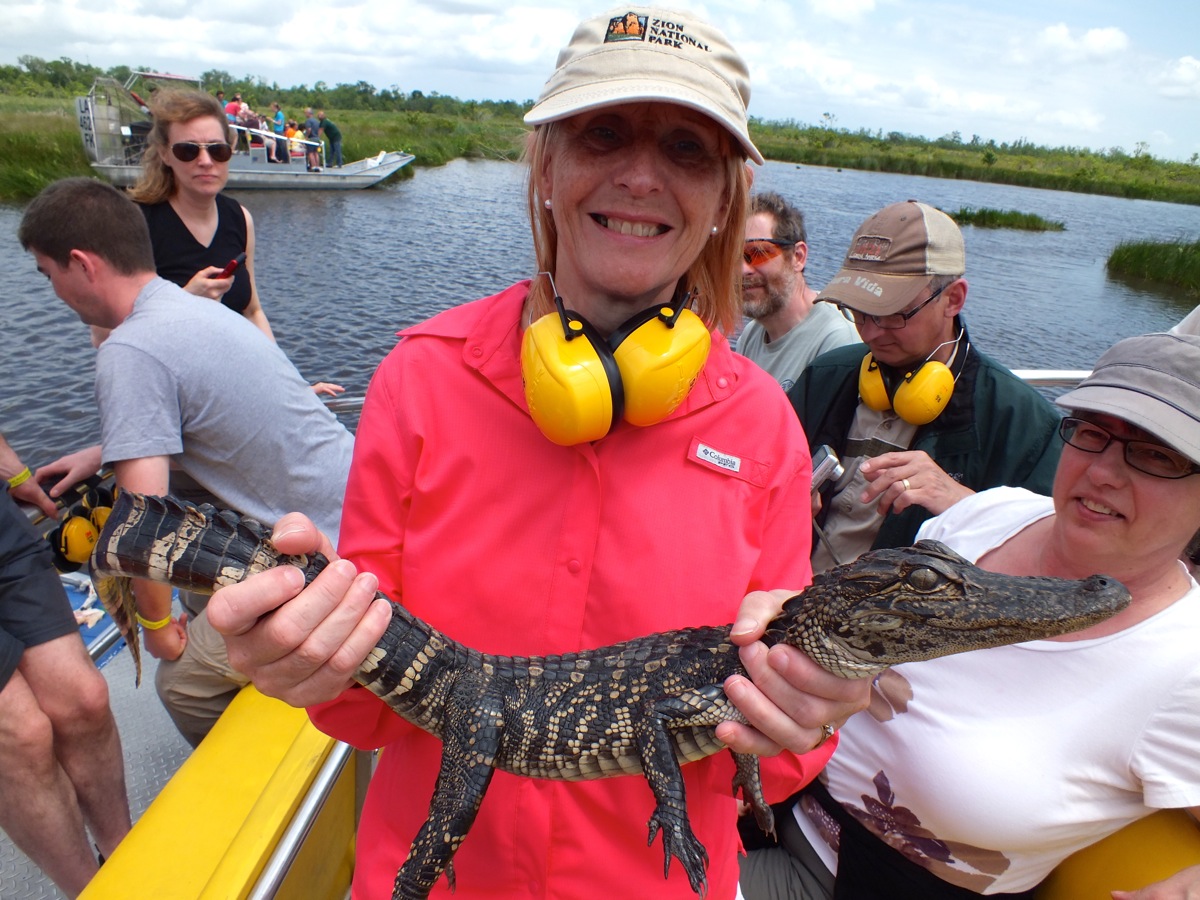 and then slow down to an inch a year.

Call in at Best Buy on the way home to get the new Sony HX300 camera; 50 time magnification, should be great for birding; good stabilisation, it’ll need it at those magnifications; quick focus, unlike my existing camera; doesn’t take 15 seconds to warm up. Then have a relaxing Starbucks. First of our trip. Starting to get withdrawal symptoms. Really fancy a proper DSLR but I’d need a 3 foot, 15lb lens, a gattling gun sized tripod and a Ford Transit van to tote the gear around. Not my idea of photography. Give me a shirt pocket camera.

Smoked pulled pork Po-Boy for dinner with just a few glasses of wine. What’s a Po-boy? Really nothing fancy just a sandwich served on French bread.

Well the religion of peace has exploded into senseless violence yet again with the Boston Marathon bombings. I’m sure the backlash against their religion will be horrendous. The Americans have had enough.  But what can they expect. I can also see that tightened security may even result in TSA on the streets. Now that would be a disaster, but the way the 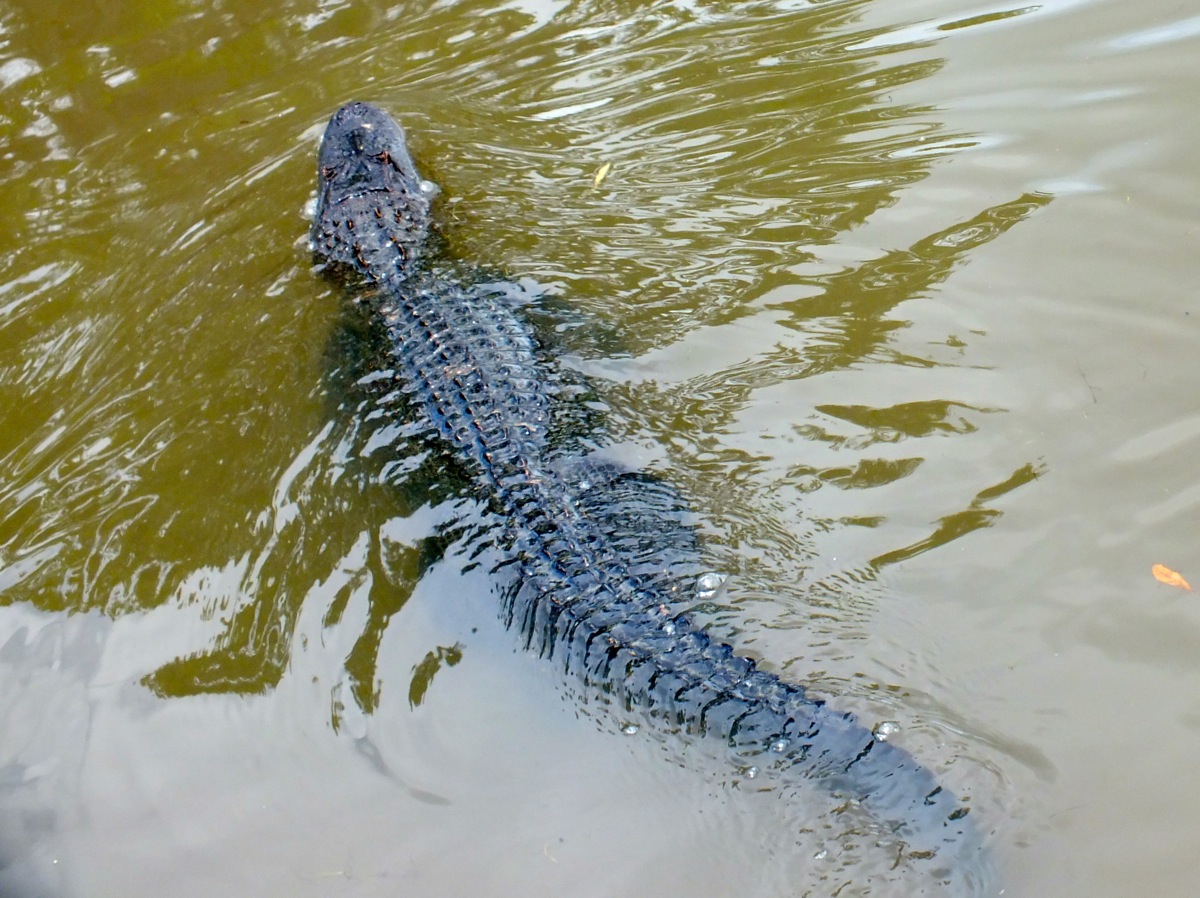 media is feeding and the potential extra profits make it a strong possibility.

A report on worldwide human rights from the US Department of State has revealed that 99 individuals were convicted in Malta last year for public blasphemy , down from 119 in 2011.

Despite its popularity amongst Brits, many are unaware that Maltese law prohibits the vilification of or giving offense to the Roman Catholic Church.

It is also a criminal offense to utter publicly any obscene or indecent words, make obscene acts or gestures or in any other way offend public morality, propriety or decency.

With my blog I could well be prosecuted. Yet another attack on free speech. 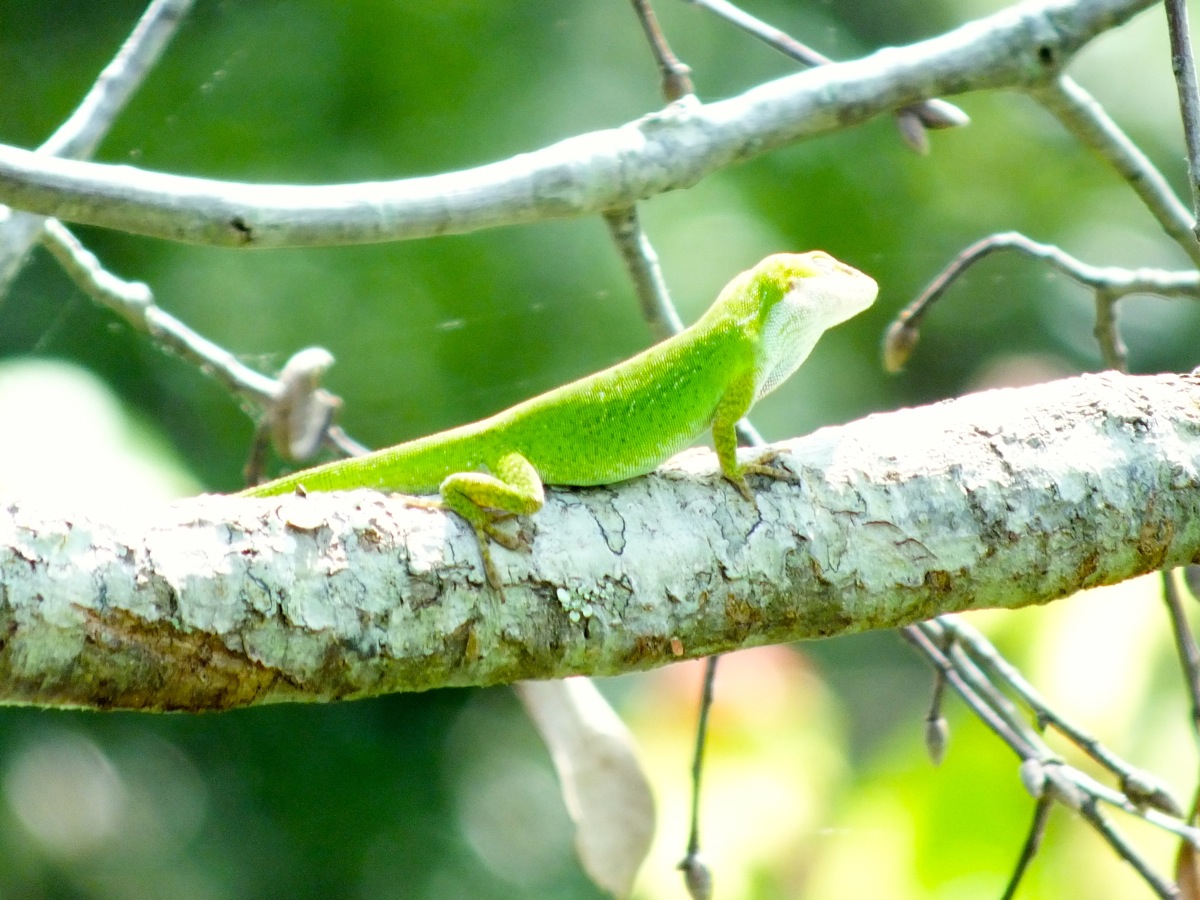 We set off on our drive up the Great River Road on our way to the Evergreen Plantation. Alas no one, including Trevor MacDonald mentioned that you hardly get to see the Mississippi as you drive along as it’s obscured by Levies – obviously no thought for the tourists when they built them. Mind you as we criss cross the river at least you get some good, but fleeting views from the bridges. Interesting most of the bridges have no walkways, but then again this is America so no one walks anywhere anyway – perhaps they swim across.

Evergreen Plantation is a wash out. Pouring it down – in typical American fashion even the rain is bigger – and they don’t fancy doing a guided tour amongst all those oak trees and lightning. Never mind we have to stick with the Trevor MacDonald DVD. 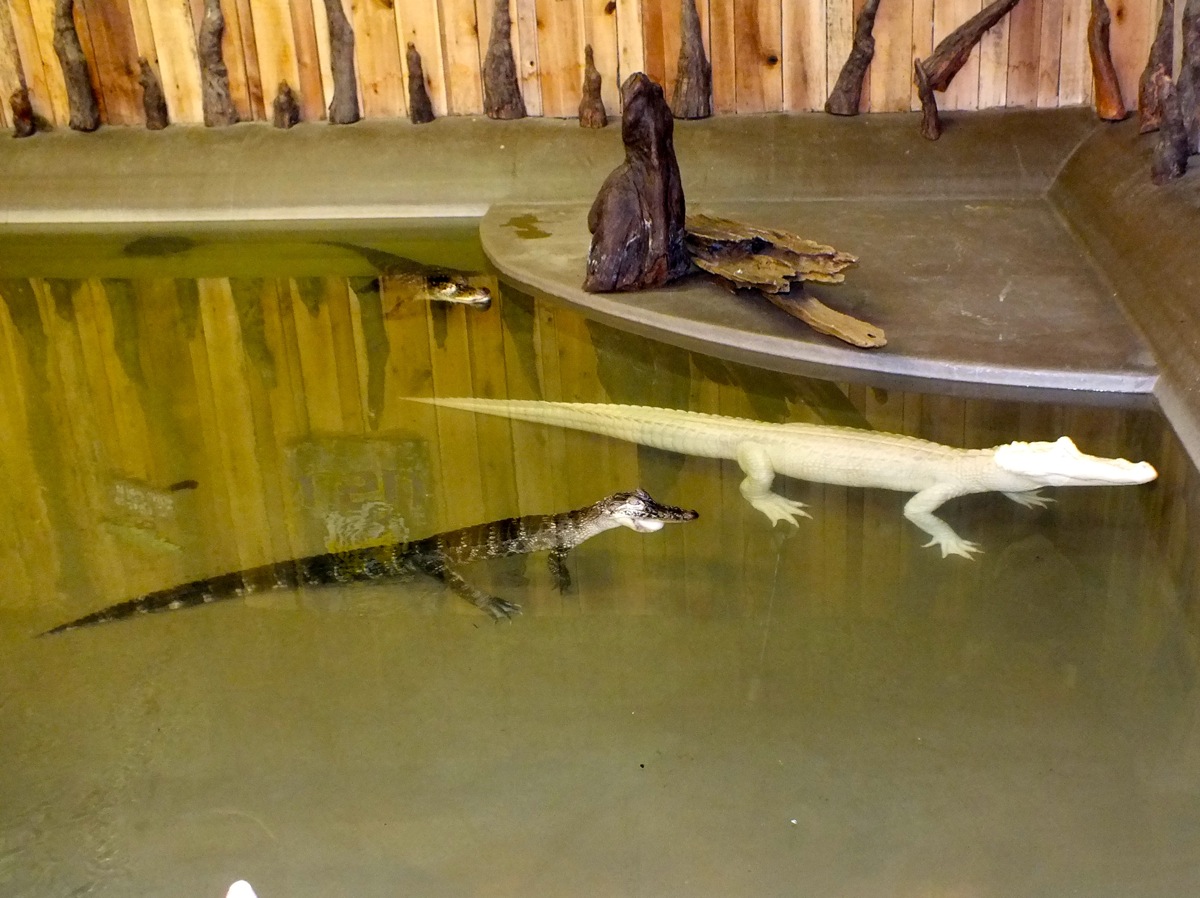 Drive up the back roads to Baton Rouge and then onto Natchez. Call in at a Mississippi Tourist Information centre. Offered free coffee, good helpful advice from very pleasant and friendly staff, with free wifi of course.

Comfort Suite hotel in Natchez is pretty grand, when we finally find it – bloody satnav. We get a suite with a Mississippi river view. Very relaxing watching the barges.

Dinner in the hotel is best described as interesting. The fried green beens were off the menu. I venture for the Catfish, fried of course, along with everything else in Mississippi. Frying seems to be their signature dish. You name they fry it, although they were a little taken back with the thought of a fried Mars bar.

In France, the police are now taking action against people caught in public wearing a burqa. 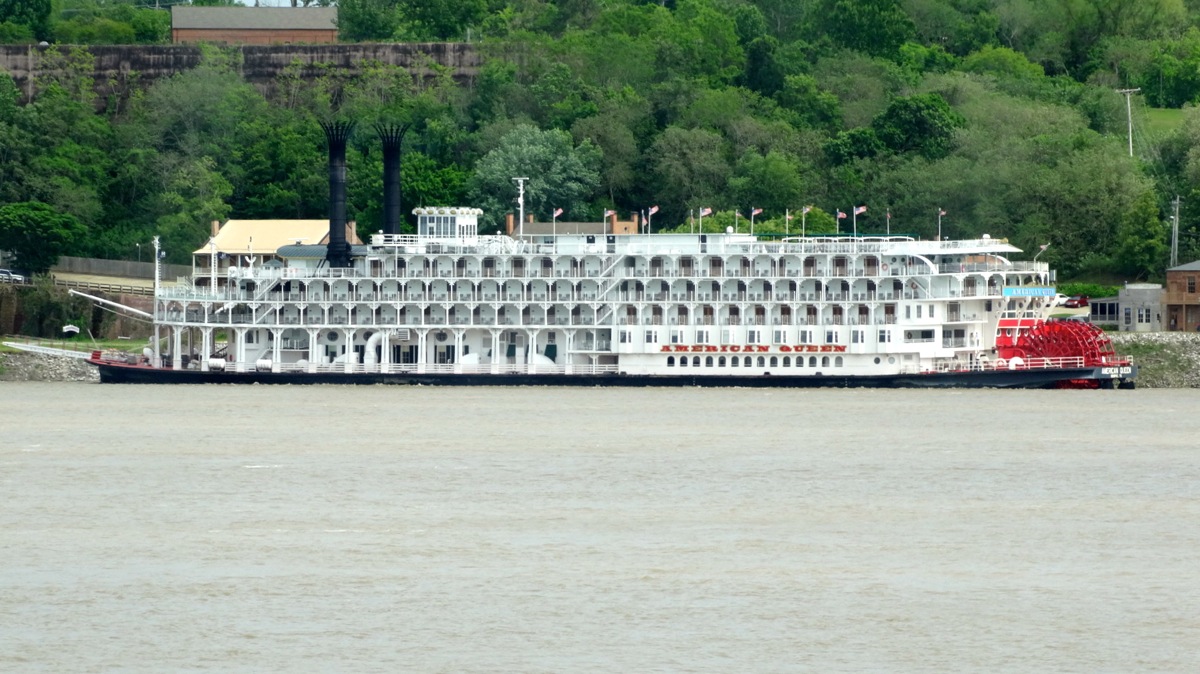 Has the BBC finally grown some balls?

Panorama goes undercover to investigate what is really happening in Britain’s Sharia Councils – Islamic religious courts. Some women reveal they have suffered domestic violence ignored by these councils as campaigners say it is time to tackle the parallel legal system which can run counter to British law.

How can we tolerate a separate legal system? Meanwhile lets wait for the toys to be thrown out the pram, the backlash, the rioting and protestations.

Birmingham rally calls for the UK to implement blasphemy laws

Up to 25,000 British Pakistani people gathered in Aston Park in Birmingham to call on the British government to introduce legislation that bars people from insulting Islam.

The participants made a peaceful and colourful mile-long march to the park where they heard speakers included interfaith leaders from Christian, Hindu, Sikh, and Jewish religions and parliamentarians from Conservative, Labour and Liberal Democrats. 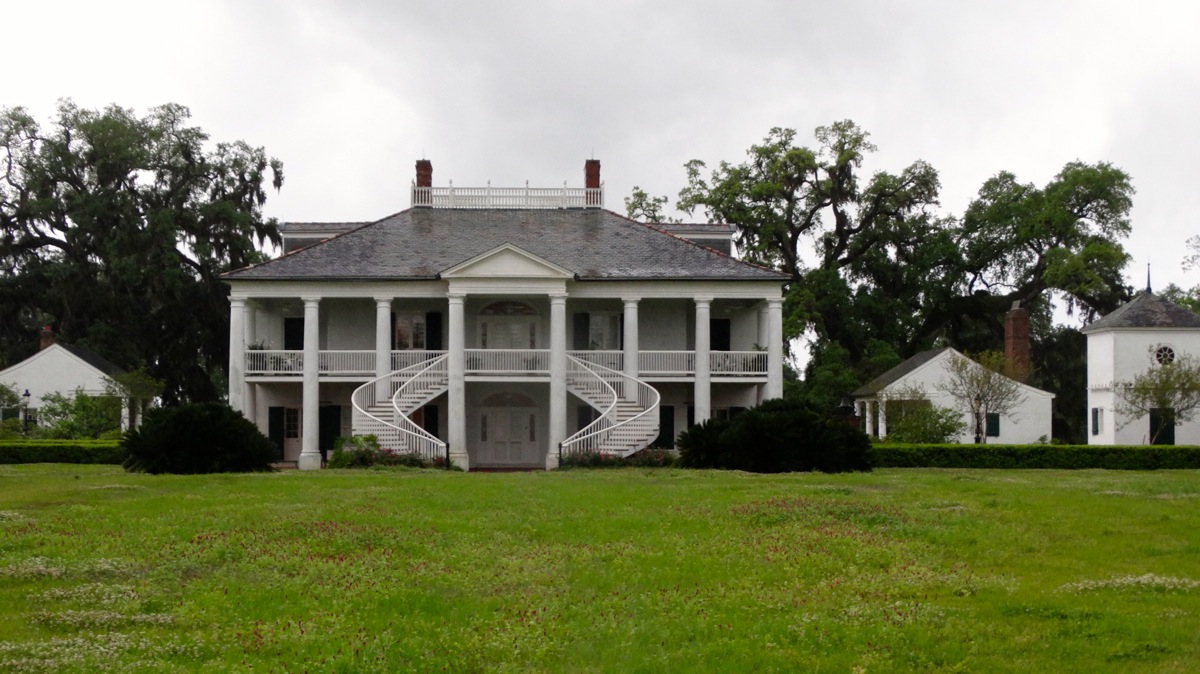 Hazrat Peer Alauddin Siddiqui, who is a renowned Sufi cleric, told Geo News: that the recent film, The Innocence of Muslims has caused hurt to Muslims all over the world. He added that It’s not fair that some people insult Islam everyday and preach hatred through their actions and words but the lack of legislation encourages such elements. We want to tell our government that insults are unacceptable and inflammatory language is contributing to the rise of extremism amongst youth in western countries.

Here they go again. Oh the poor wee things. No doubt the do gooders and bleeding hearts will be chomping at the bit. Free speech seems to be under attack everywhere, predominantly from religious fruitcakes. If this gets implemented I think we’ll become political refugees and flee the country.