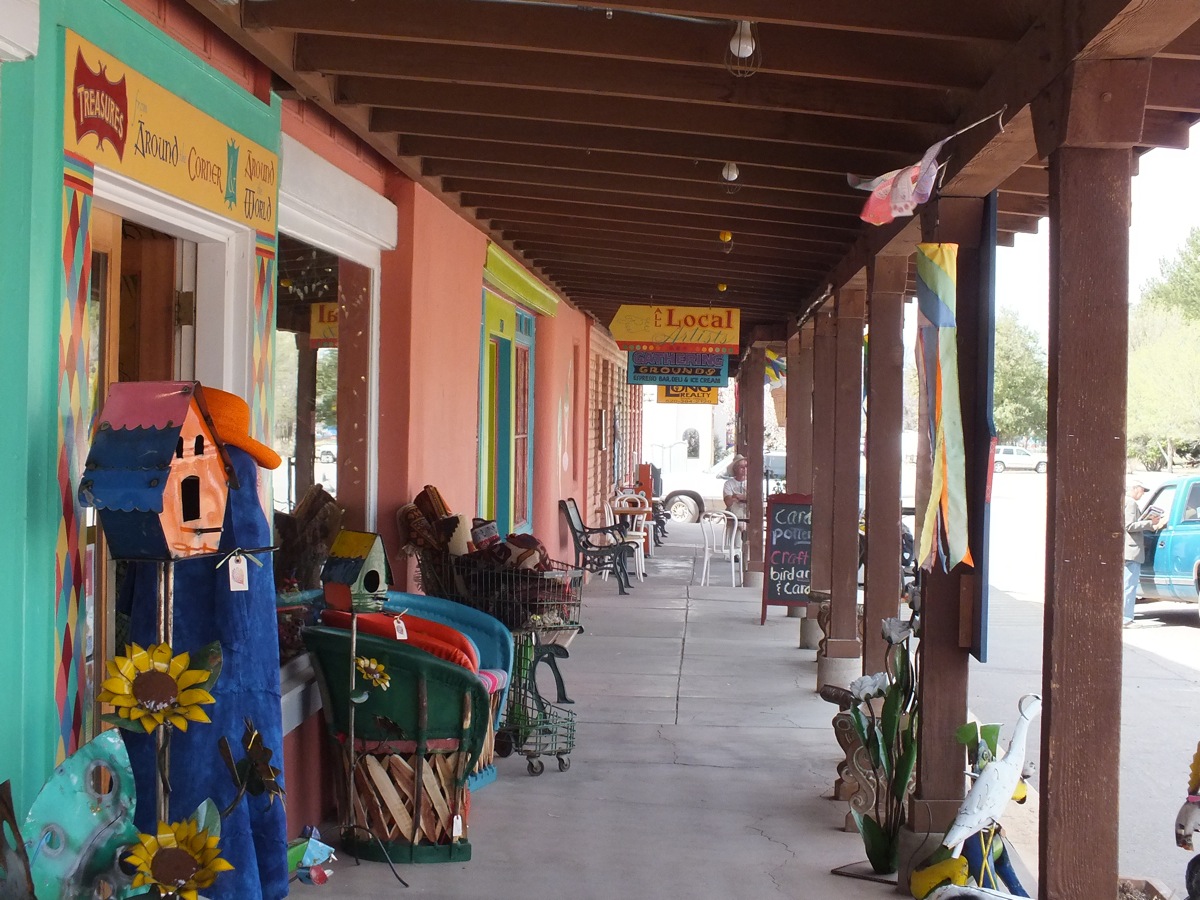 Out for 09:00 for a drive down to Patagonia Lake. Visit the famous – well at least amongst birders – Patons Hummingbird site. It’s in Patons back garden; Chair under and awning; loads of bird feeders, especially Hummingbirds; full of Birders with giant phallic extensions to their cameras so big they need a tripod and crane to lift them – and then they think IT people are nerdy! Great site and loads of birds seen and amazing that it’s free.

Visit Sonita Creek Nature preserve – $5 a head – lovely walk but not a bird in site, only Javelina’s.

Meanwhile some Americanise – “Man that just up my alley”. Roughly translated “I really like it.”

Drive over to Sierra Vista and a great Hotel. 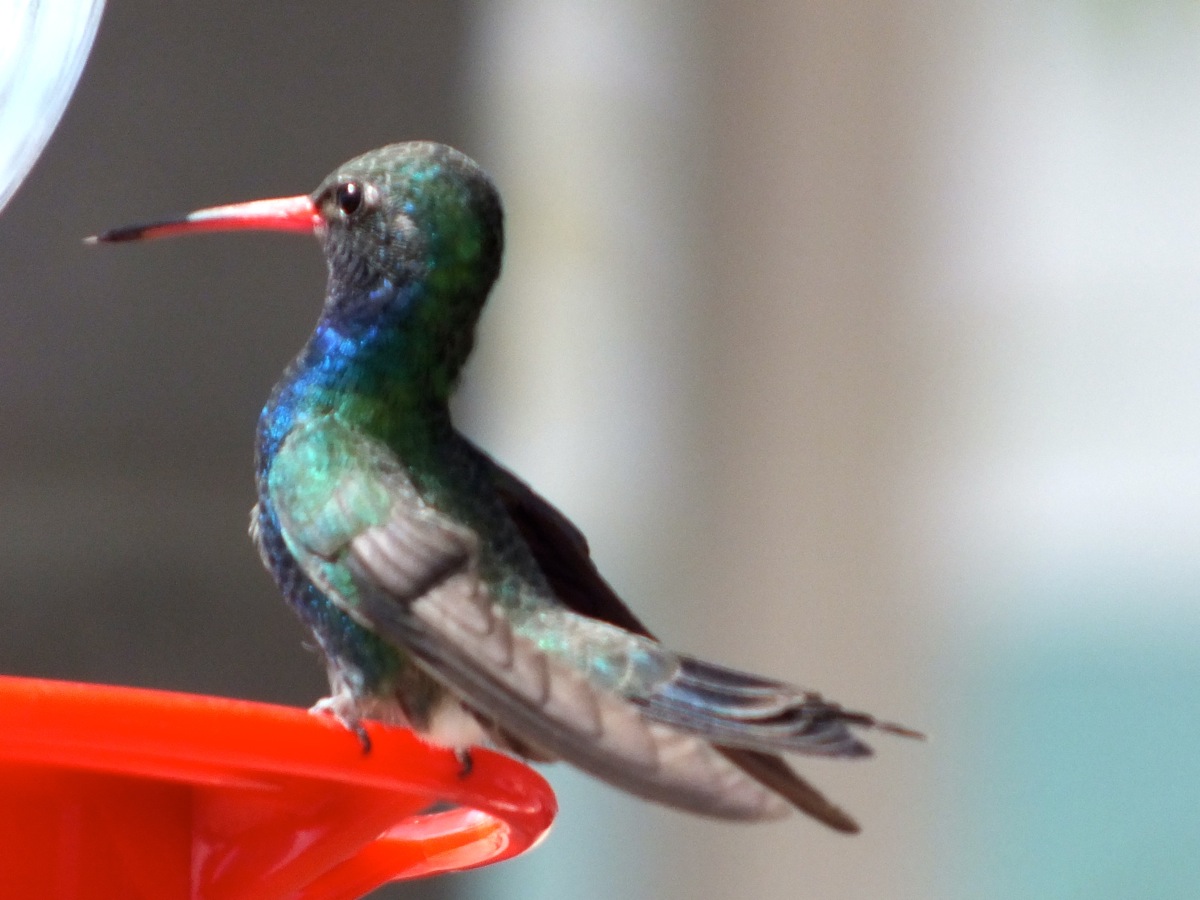 Meanwhile in case we wander into New mexico here’s some of their silly slaws:

Women may walk in public topless provided they have their nipples covered.

It’s forbidden for a female to appear unshaven in public.

Persons may not spit on the steps of the opera house.

You may not carry a lunchbox down Main Street. 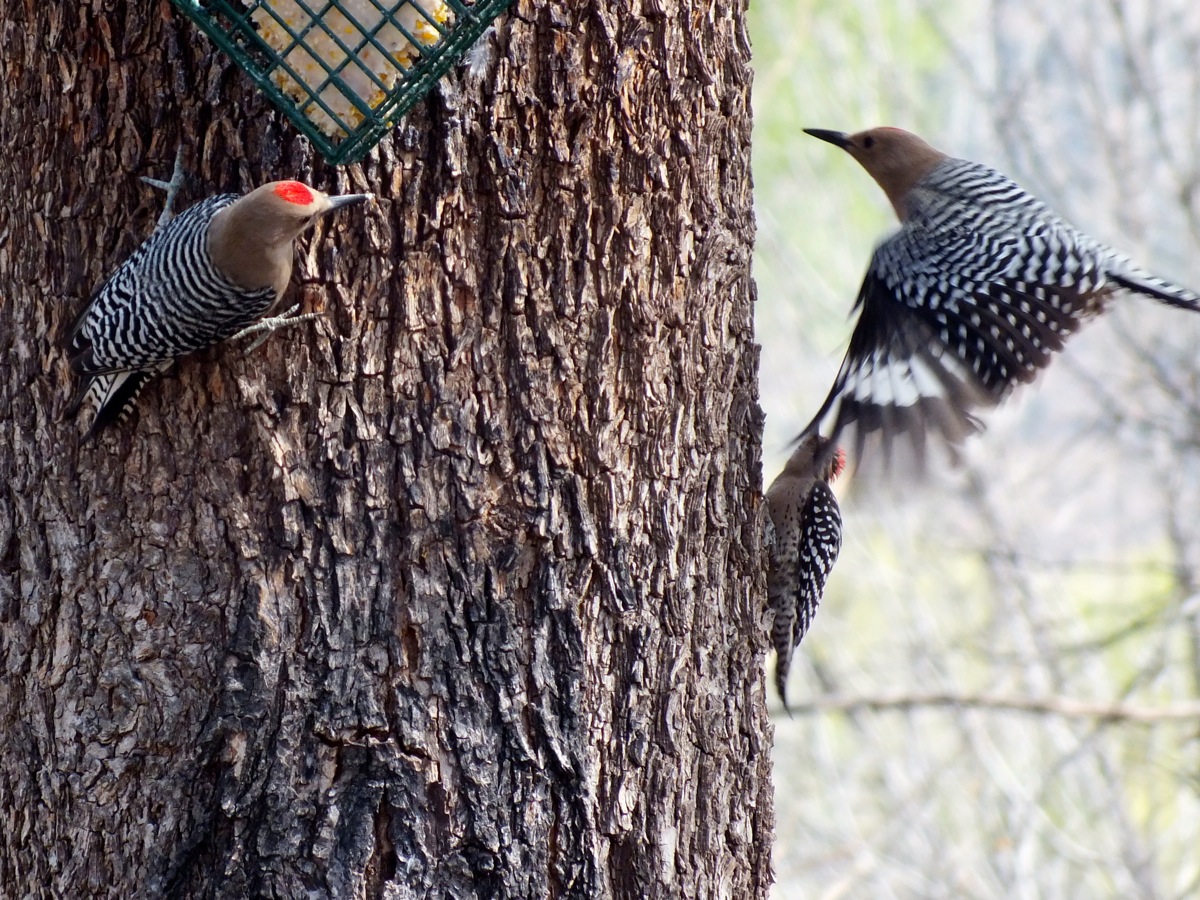 Only been in the job a few days. Did he know what he was letting himself in for:

While popes have for centuries washed the feet of the faithful on the day before Good Friday, never before had a pontiff washed the feet of a woman. That one of the female inmates at the prison in Rome was also a Serbian Muslim was also a break with tradition.
“There is no better way to show his service for the smallest, for the least fortunate,” said Gaetano Greco, a local chaplain.
Pope Francis kissing the feet of a young offender
Pope Francis washed the feet of 12 inmates aged 14 to 21, among them the two women, the second of whom was an Italian Catholic. Mr Greco said he hoped the ritual would be “a positive sign in their lives”.
Catholic traditionalists are likely to be riled by the inclusion of women in the ceremony because of the belief that all of Jesus’ disciples were male.

Good for him, let’s stir it up and head for change.

Up early for a great breakfast – waffles. Meet some Americans who have have obviously lost the plot as they think Wendy speaks the Queens English. 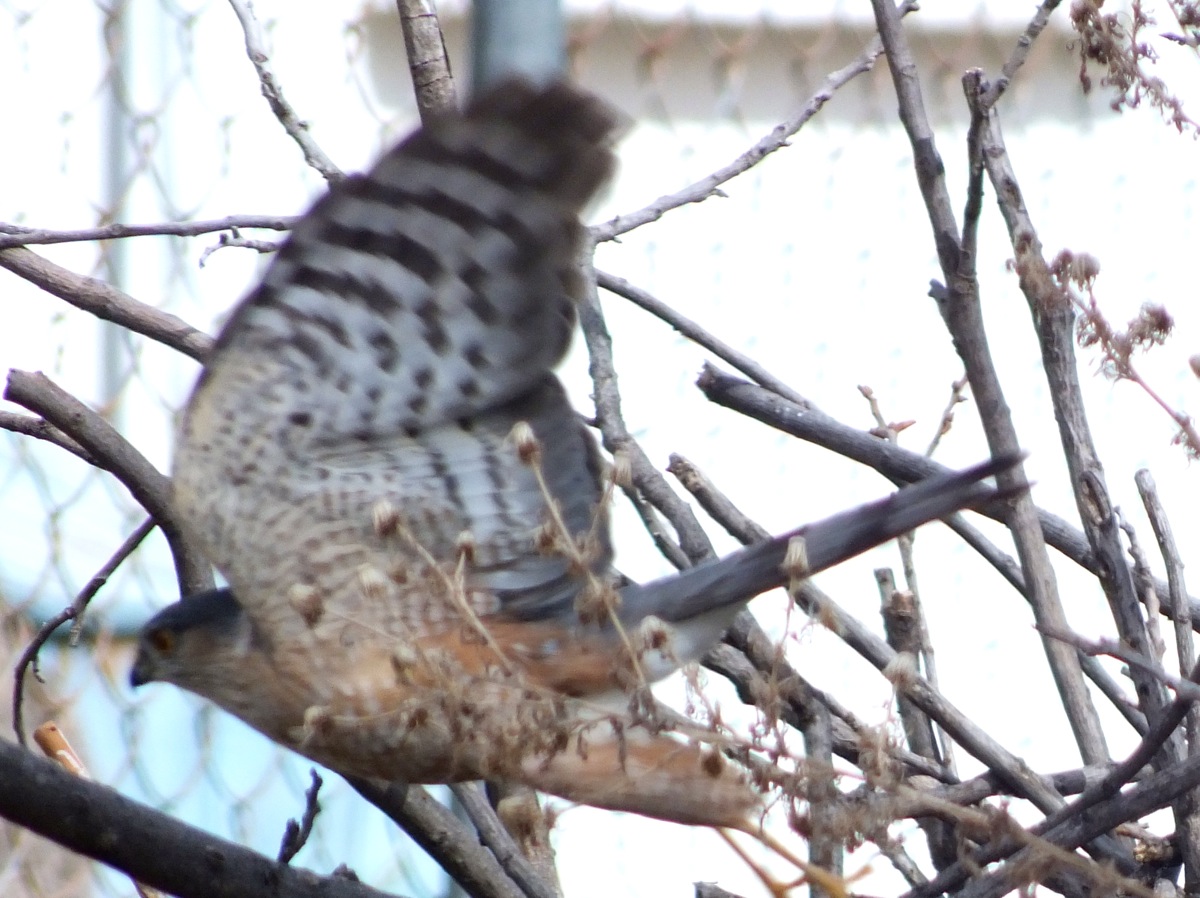 Off down to Ramsey Canyon, another famous birding and beauty spot. Bump into a birding walk up the Canyon. So a 1 hour birding trip turns into a 3 hour tour. Great walk; lovely canyon; informative and entertaining guide; FOC – my favourite; but alas few birds. However we do get to see the American Woodpecker – a rare sighting apparently. Add 3 new birds to our sighting collection. 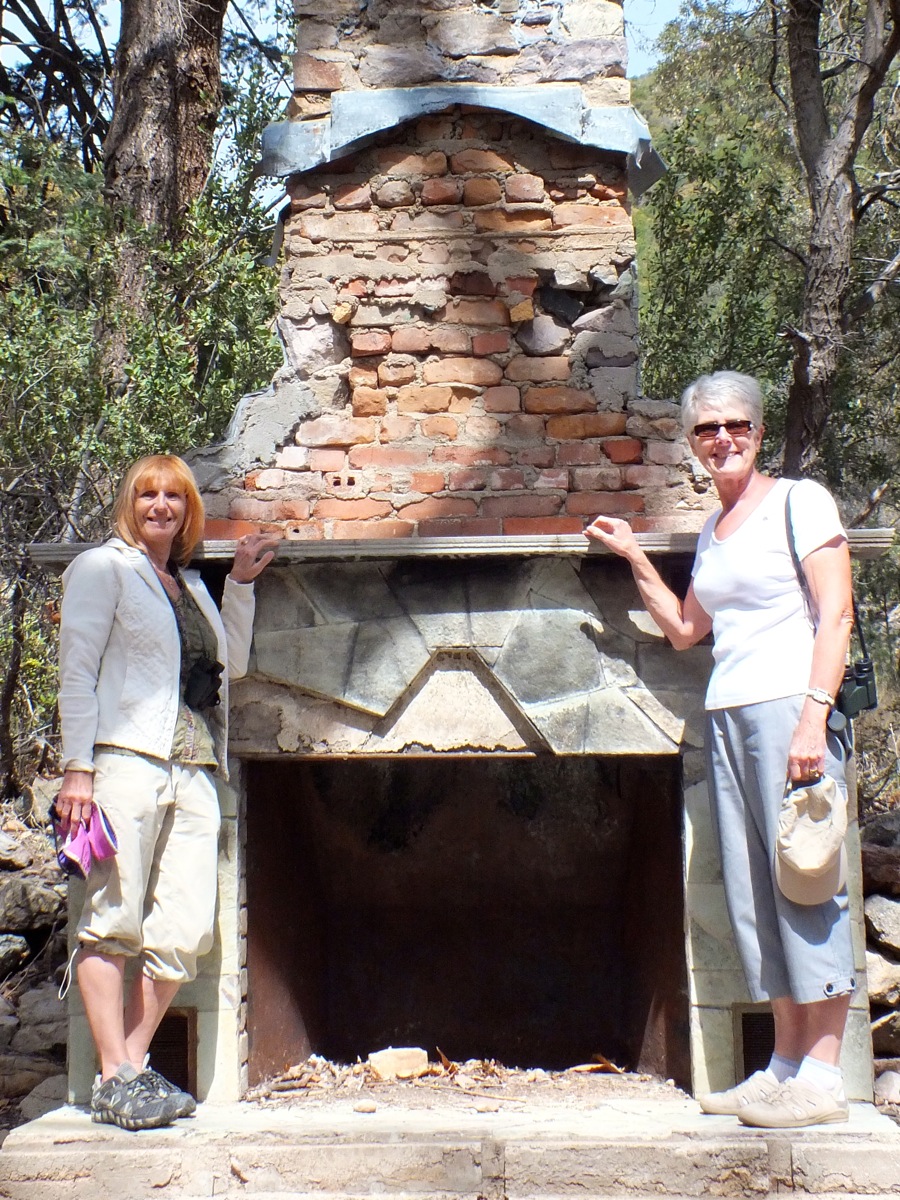 After Ramsey Canyon we drive down to Bisbee. Everyone says it’s a must see! Worse than Jerome and that’s saying something. Best thing was seeing convict shuffling out of court in chains in bright orange and white horizontal striped uniforms. Why don’t we treat our convicts like this or send them somewhere else!

Then after the intrepid travellers have been fed and watered we set off to Tombstone. 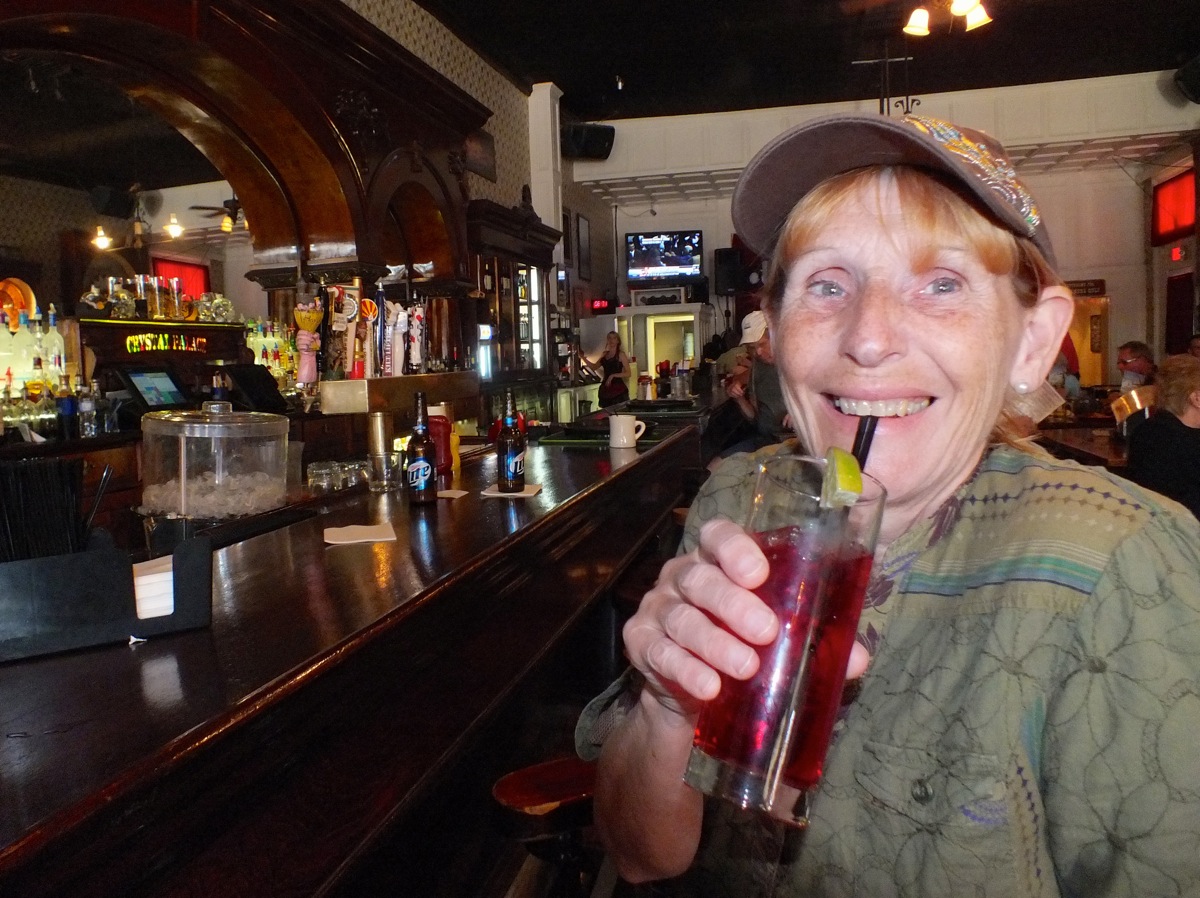 Anne and Kevin do the shoot out at one of the 5 original OK Corals in Tombstone – well comedy shootout. Just as boring apparently as all the others. Wendy  and I have a mossy around and then break one of the sacred laws of retirement and have a beer in a saloon – forgive me for I have sinned! Nearly fall off one of the swivel chairs at the bar as a gunfight ensues, they sure wake you up even though they’re firing blanks. All the waitress’s are properly attired in basques, short belts and back fishnet tights – very tasty. One of them has a platform bra / basque with two “giant St Bernard puppies” try to escape. This time I and 2 other guys fall off their perches. Sadly none of the pictures turn out.

It is illegal for men and women over the age of 18 to have less than one missing tooth visible when smiling.

Women may not wear pants.

Nudity is allow, provided that male genitals are covered.

Women may walk in public topless provided they have their nipples covered.Full text of the law. 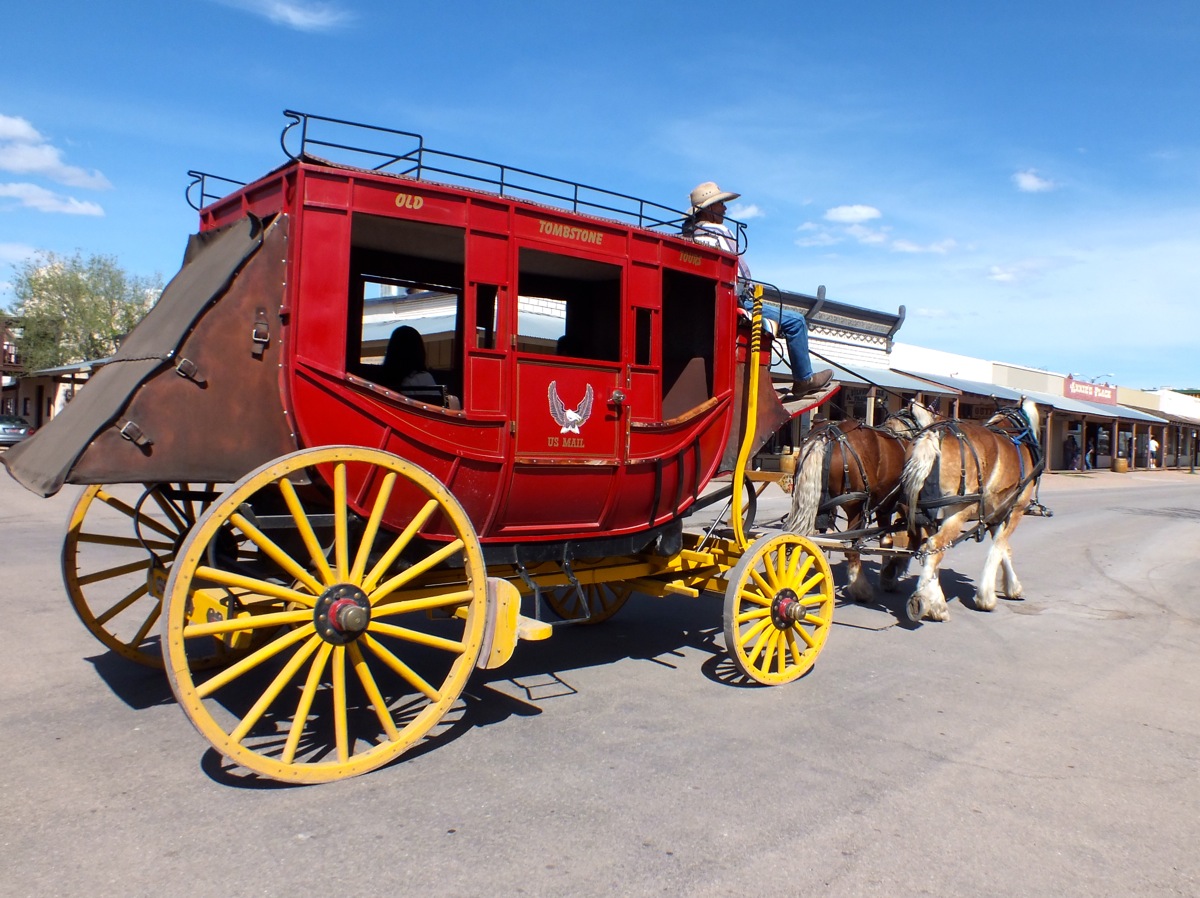 Idiots may not vote.

State officials ordered 400 words of “sexually explicit material” to be cut from Romeo and Juliet.

They can’t even spell:

The website of topless feminist group Femen has been hacked and replaced with a page declaring the women dirty pigs. The message, in broken English, is spelt out in red and black capitals and reads:

Dirty pigs!
No fuck for you, even for your men! 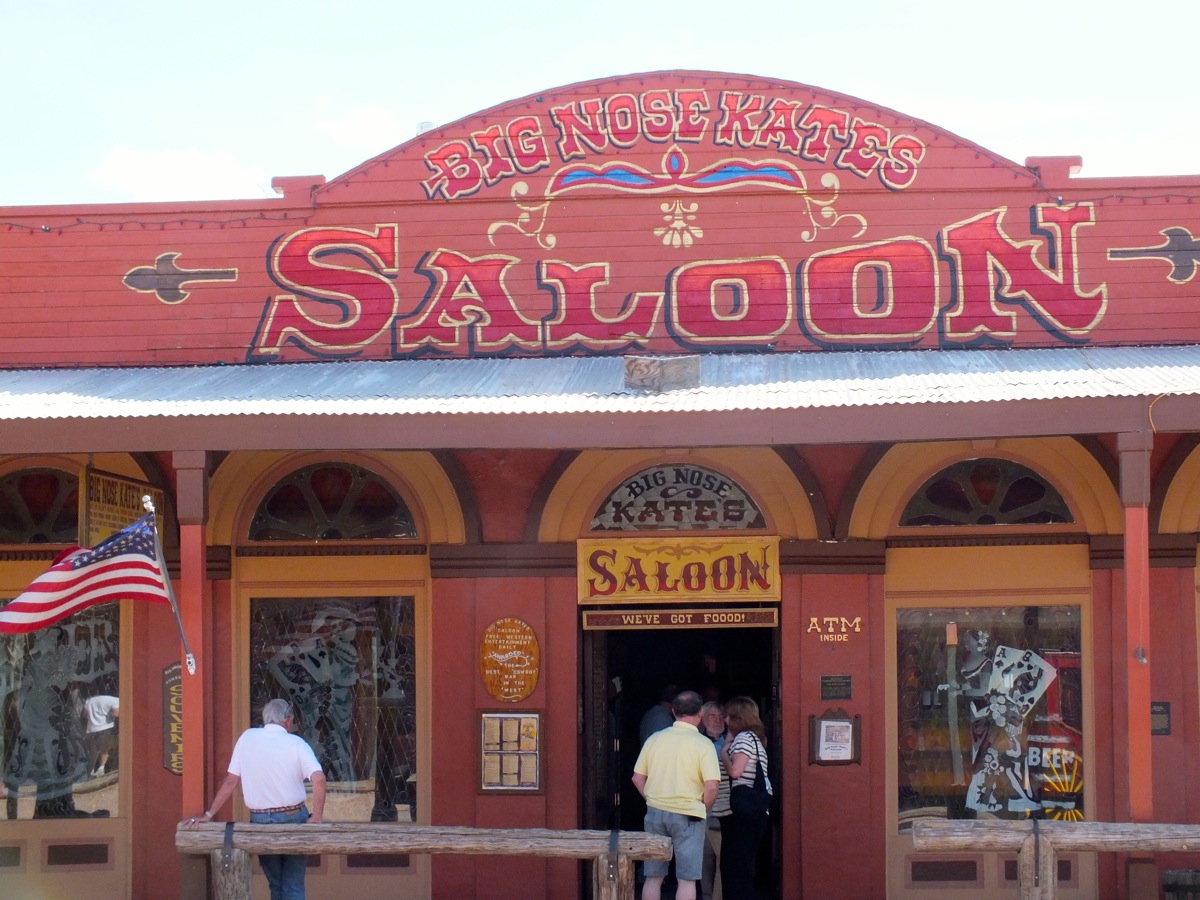 Come here Tunisa!
We will cut your breasts and give food our dogs!
Die sluts, prostitutes from Israel!

Femen posted on their Facebook page Dear friends, our website femen.org was hacked. Don’t trust the information that will be posted there till the moment we inform you that the website was fixed.

The women’s rights group has received international news coverage in recent weeks amid fears for Tunisian topless protester Amina Tyler after threats to stone her to death were posted online.

An international Free Amina movement began on April 4 with the news that Amina has been imprisoned in a psychiatric hospital. 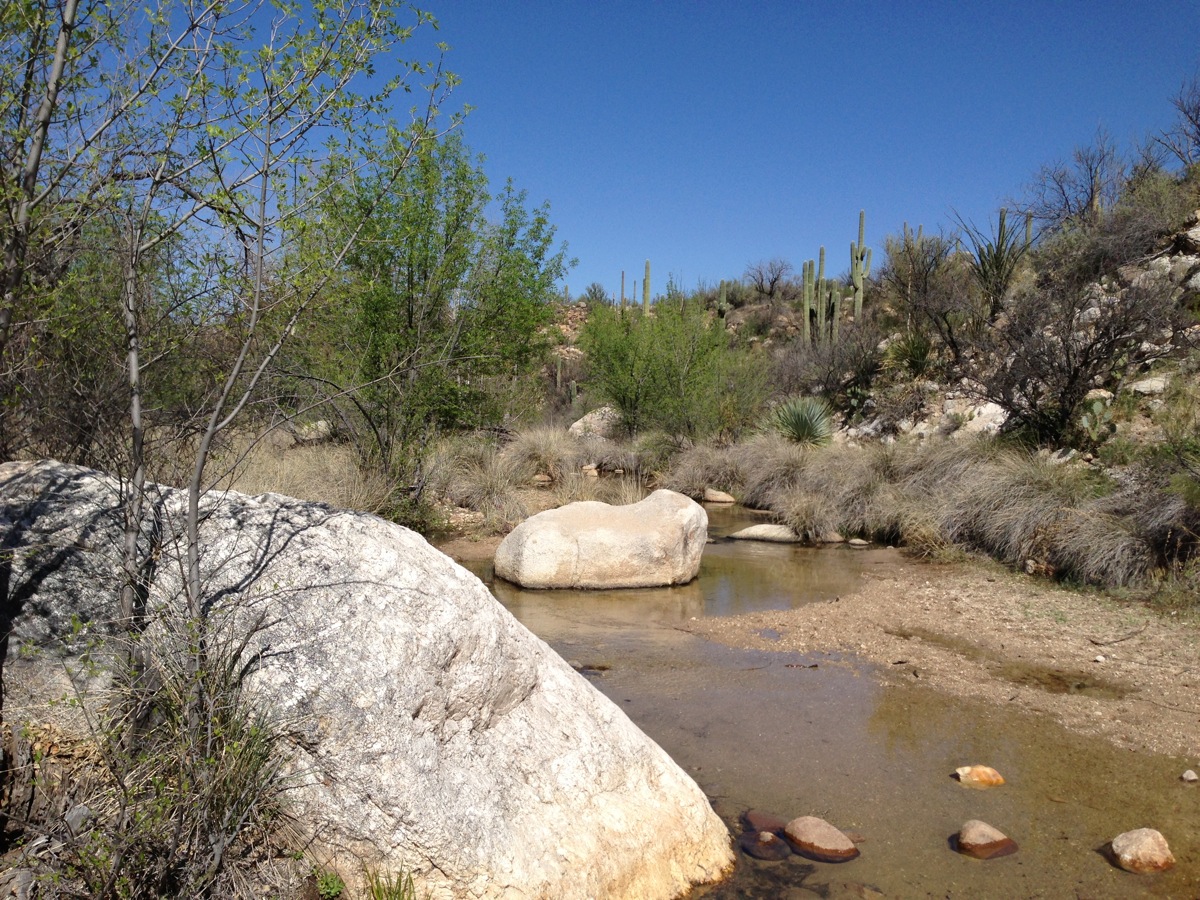 Idle’itiss seems to have set in. Everyones either lounging around or shopping this morning after our two day excursion.

I go down to Catalina SP for a morning route march. Up to the Romero Canyon to the Montrose pools – sadly not that spectacular. Then do the Canyon Loop trail. An energetic 3.5 mile march in the gruelling sun, and it’s only 09:00. Lovely at this time of the morning.

As a reward call in Starbucks for coffee and wifi. Our cable modem’s gone the way of the Dodo, there’s a technical term for it – knackered.

Lengthy chat with Comcast who finally diagnose it as dead. Classic help desk. Can go and pick up an FOC replacement but what they forget to mention is that it’s not Comcast’s, so not FOC. Drive across Town to the service depot to find this out – typical Help desk numpty. Bestbuy next. Set it all up ok and then final step it screws up with screen that locks out. 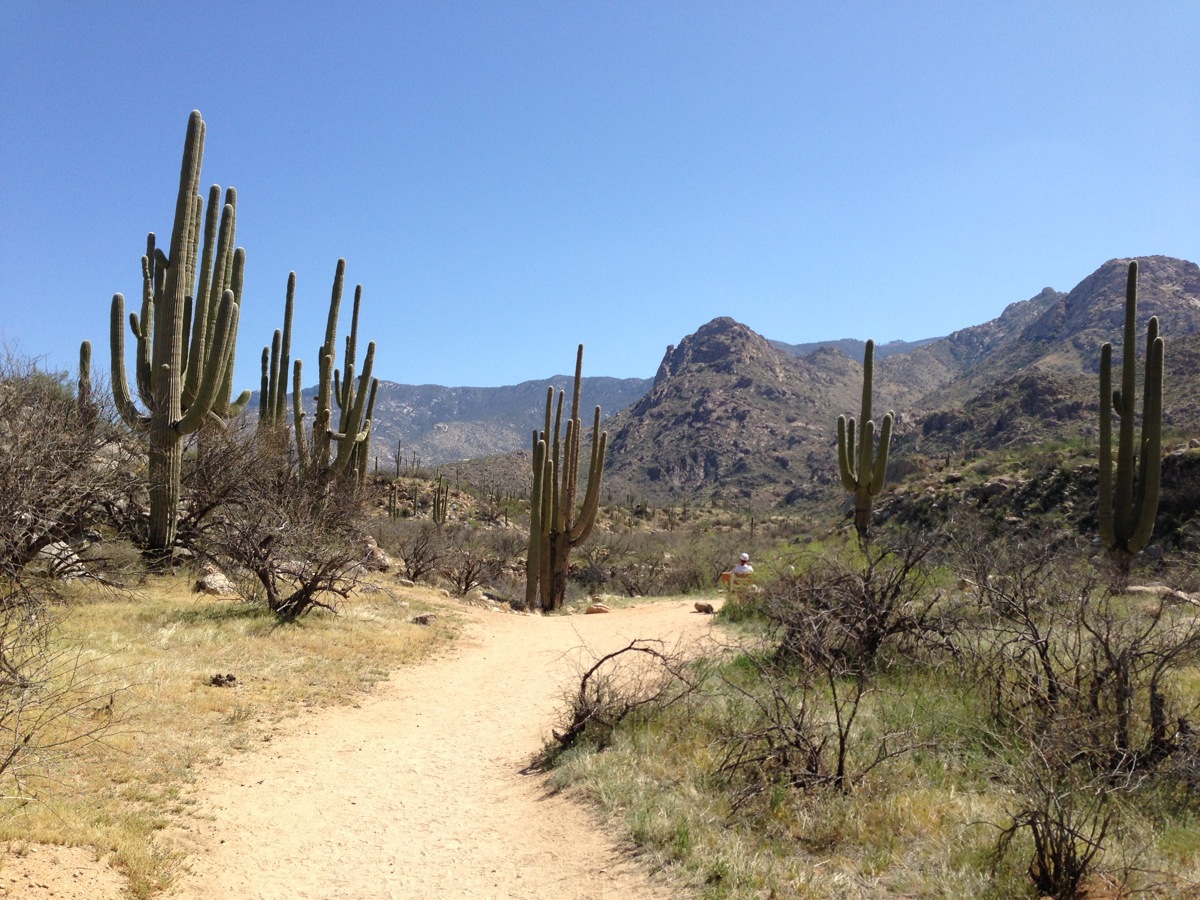 Now there’s a surprise, an IT solution that doesn’t work. Never experienced that :7). So internet not working yet I can Skype Comcast -interesting! Am I surprised? Comcast techies – note the plural – final fix it with a TOTO.

Anne and Wendy get their weekly treat with a trip to the supermarket. I have to make do with a Jacuzzi and lazy afternoon.

Tucson’s a great place but the traffic lights and lack of roundabouts does your head in. Best solution is to take a book with you to read at traffic lights!

One may not mutilate a rock in a state park.

Car dealers may not show cars on a Sunday.

It is illegal for liquor stores to sell food or grocery storesto sell any alcohol except beer that is at most 3.

It is illegal to ride a horse while under the influence. 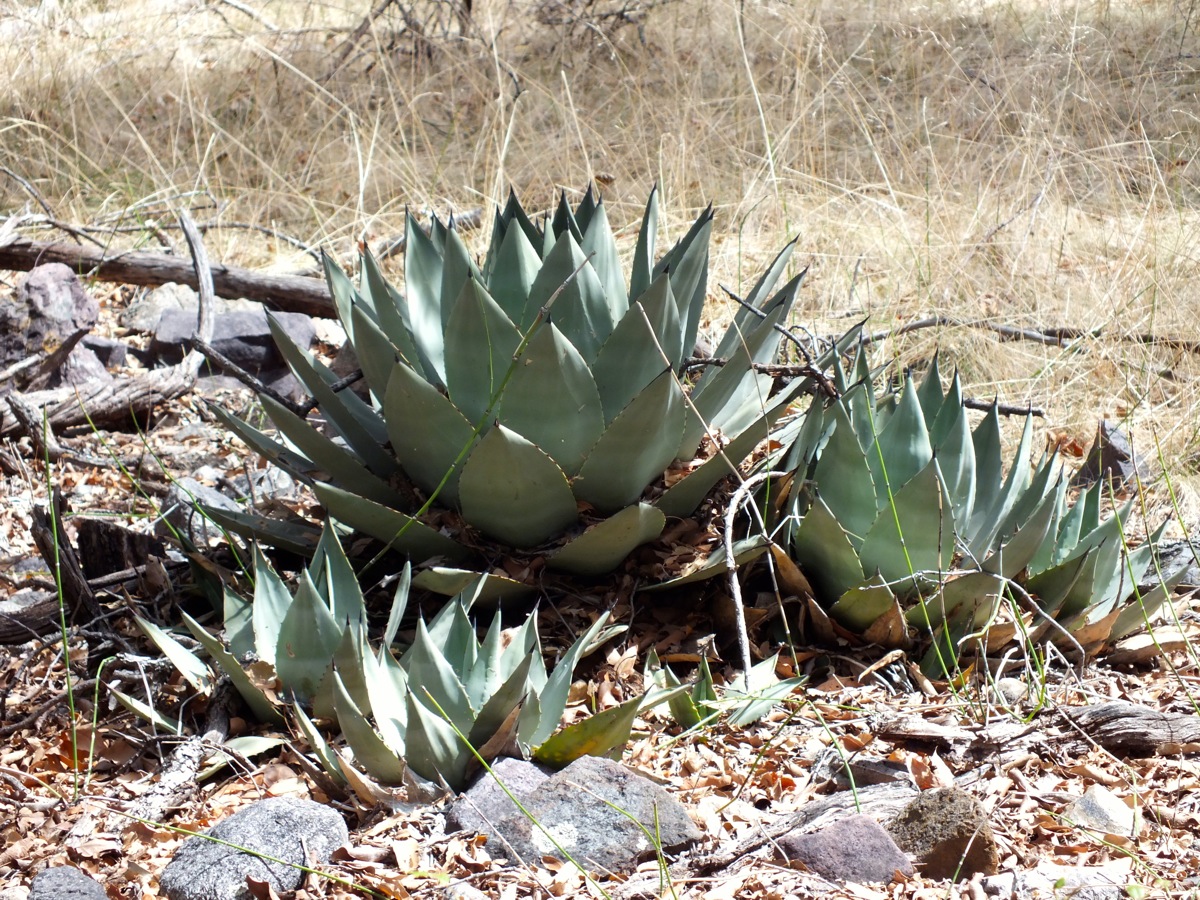 Tags may be ripped off of pillows andmattresses.

Throwing missles at cars is illegal.

Keeping a house where unmarried persons are allowed to have sex is prohibited.

Establishments which sell alcohol must have enough lighting to read text inside them.

Catapults may not be fired at buildings.

It is legal to challenge a police officer, but only until he or she asks you to stop. 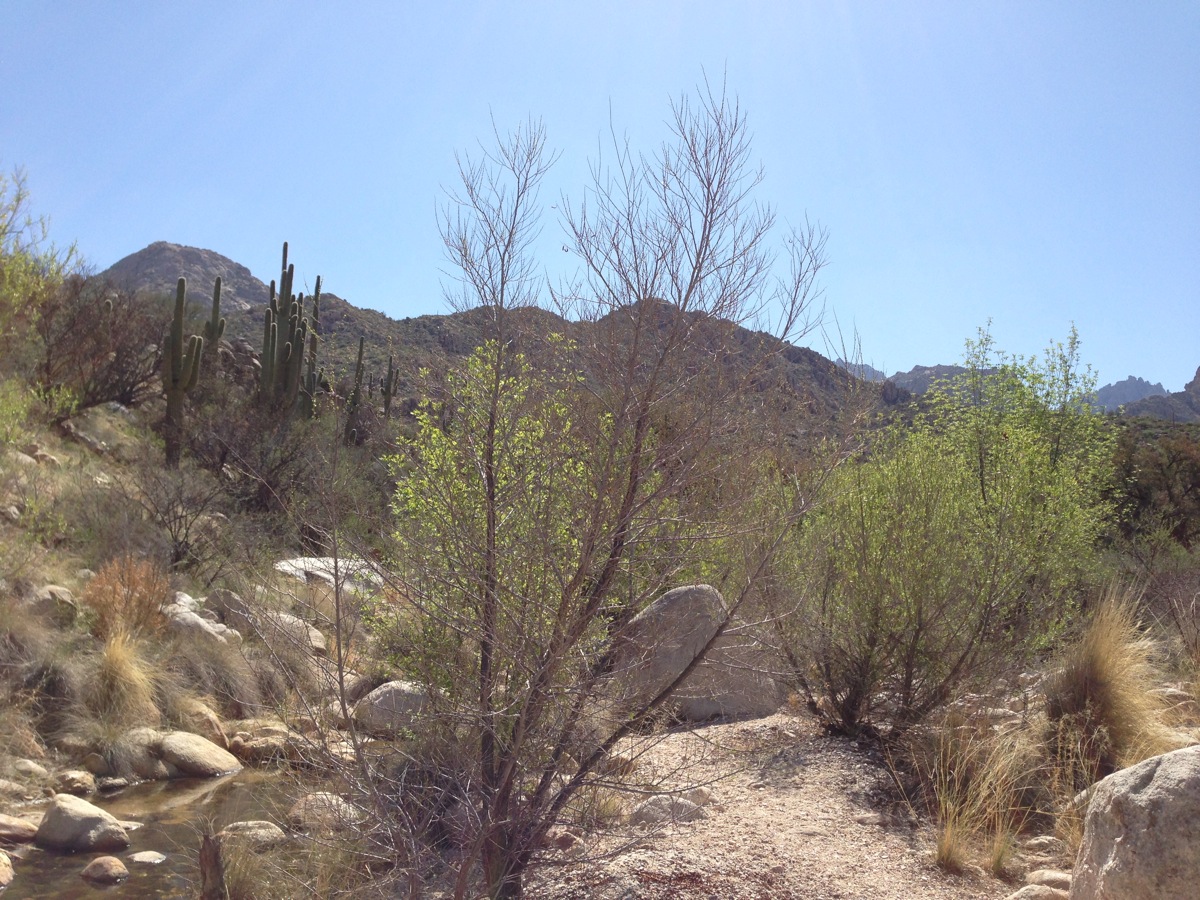 It is illegal to permit ones llama to graze on city property.

\Boulders may not be rolled on city property.

Couches may not be placed on outside porches.

Two of the leading British blogs taking issue with religious extremism have been taken offline for an entire week by a large-scale cyber attack. No one has yet claimed responsibility for the attacks, but by the very nature of their targeting, the sources are thought to be religious extremists.

Both Harry’s Place and Student Rights suffered massive denial of service (DDOS) attacks over the past week – a cyber attack which blasts servers with traffic in order to overload them and effectively knock the websites out. 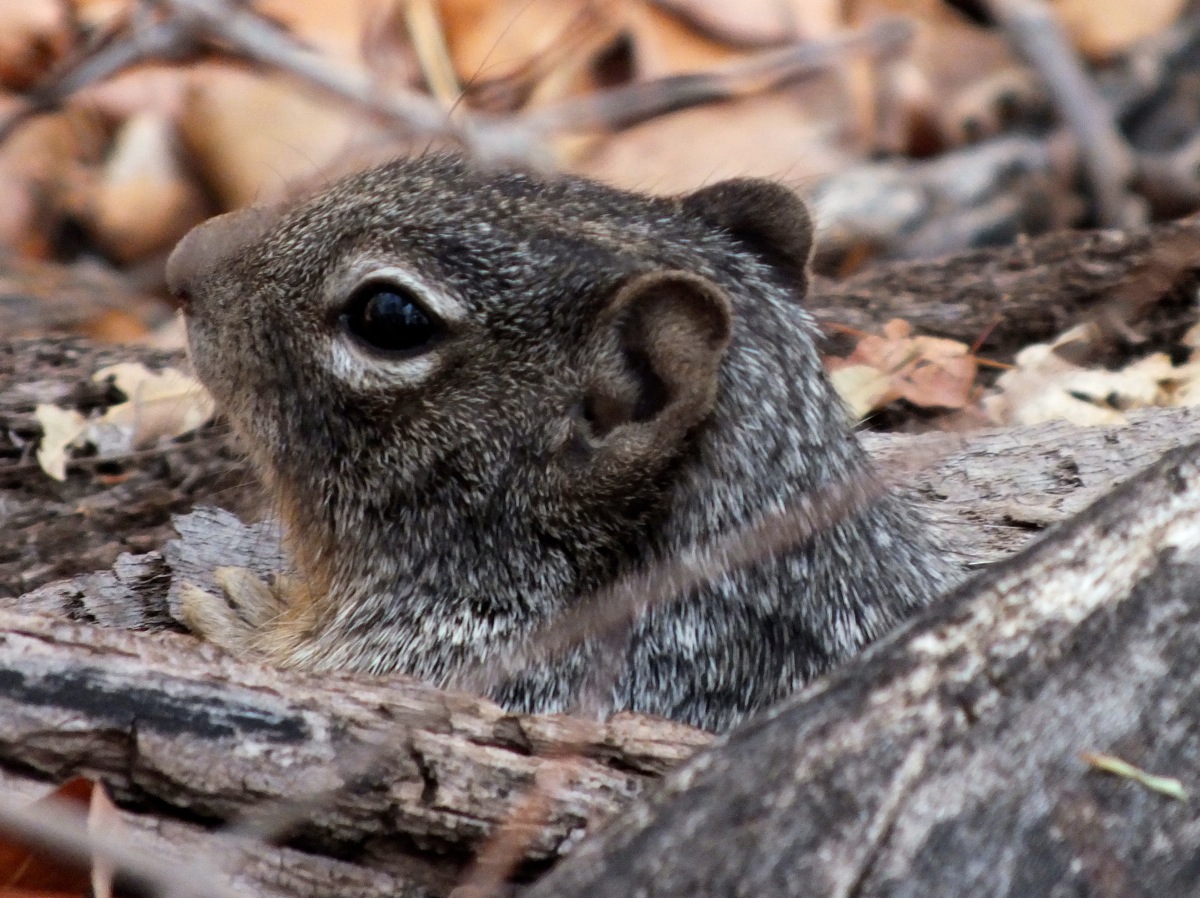 A statement posted on the Harry’s Place website said:

We were taken down by another very nasty DDOS attack. The ferocity of this one was actually quite staggering, so clearly we’re doing something that is getting under someone’s skin, someone with a very a fair amount of resources behind them. That a humble blog like ours — written by a few amateur pundits in their spare time, and relying entirely on donations from readers for its expenses — seems to threaten forces with this sort of virtual fire-power at their disposal is as flattering as it is baffling.

Student Rights, the leading pressure group in the UK for tackling extremism on university campuses said in a statement:

Our website has been the target of a malicious and illegal attack for a prolonged period of time. Our work, as many know, is to challenge extremism including Islamist activity and the far-right. We can only imagine that the attack must have emanated from one of these two groups.

Authorities are currently investigating the attacks. I bet!