Saturday – grey and rainy as we leave Sarasota and then hot and sunny by the time we get to Fort Lauderdale. 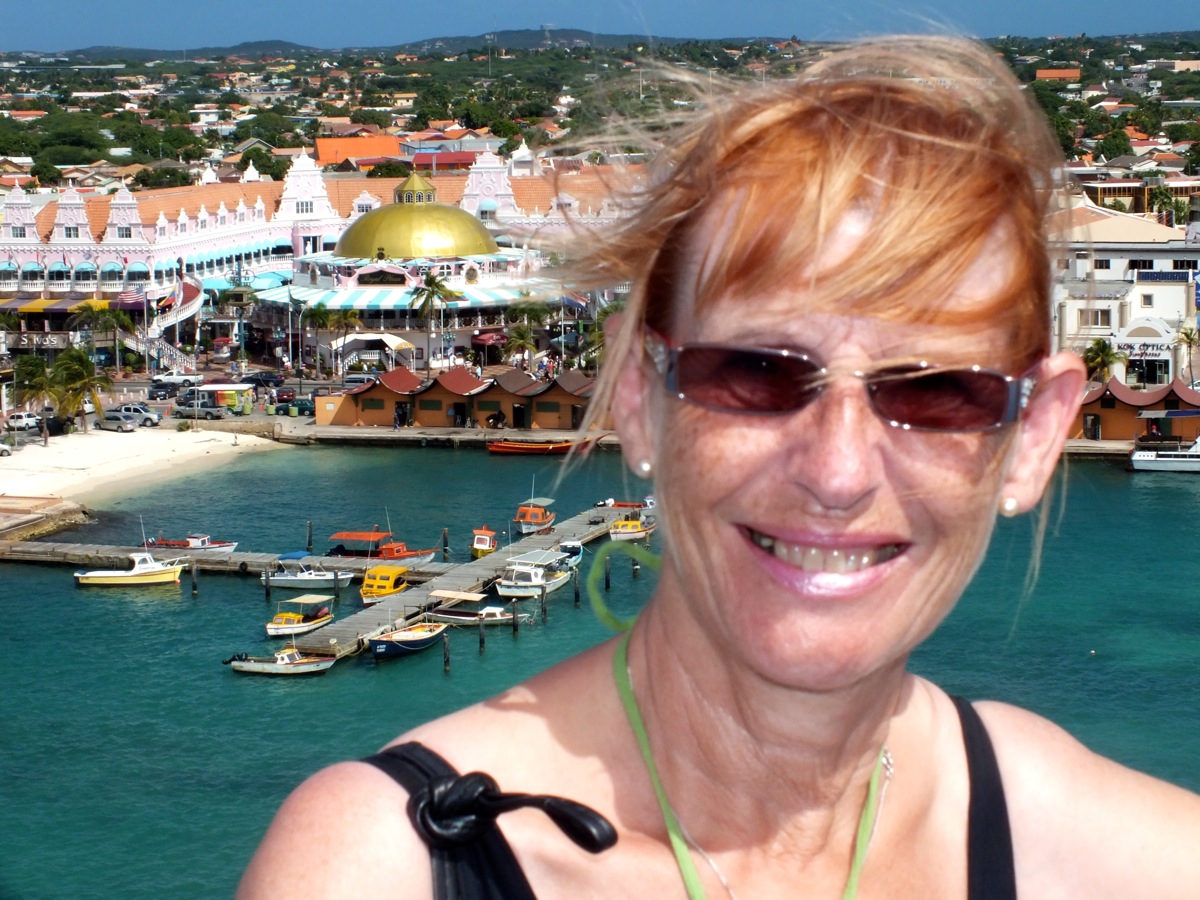 Relaxing motorway drive all the way. Cross the top of the Everglades and through the Cypress Preserve.

Have a drive down to Deerfield Beach thinking we’ll have a pleasant coffee on the beach front – no chance. Not a single coffee shop in site.

So what’s the best seller been this Christmas here in the land of the free? Is it iPad, iPhone, even a kindle, barbie doll? No, it’s automatic rifles and automatic weapons – multiple killing 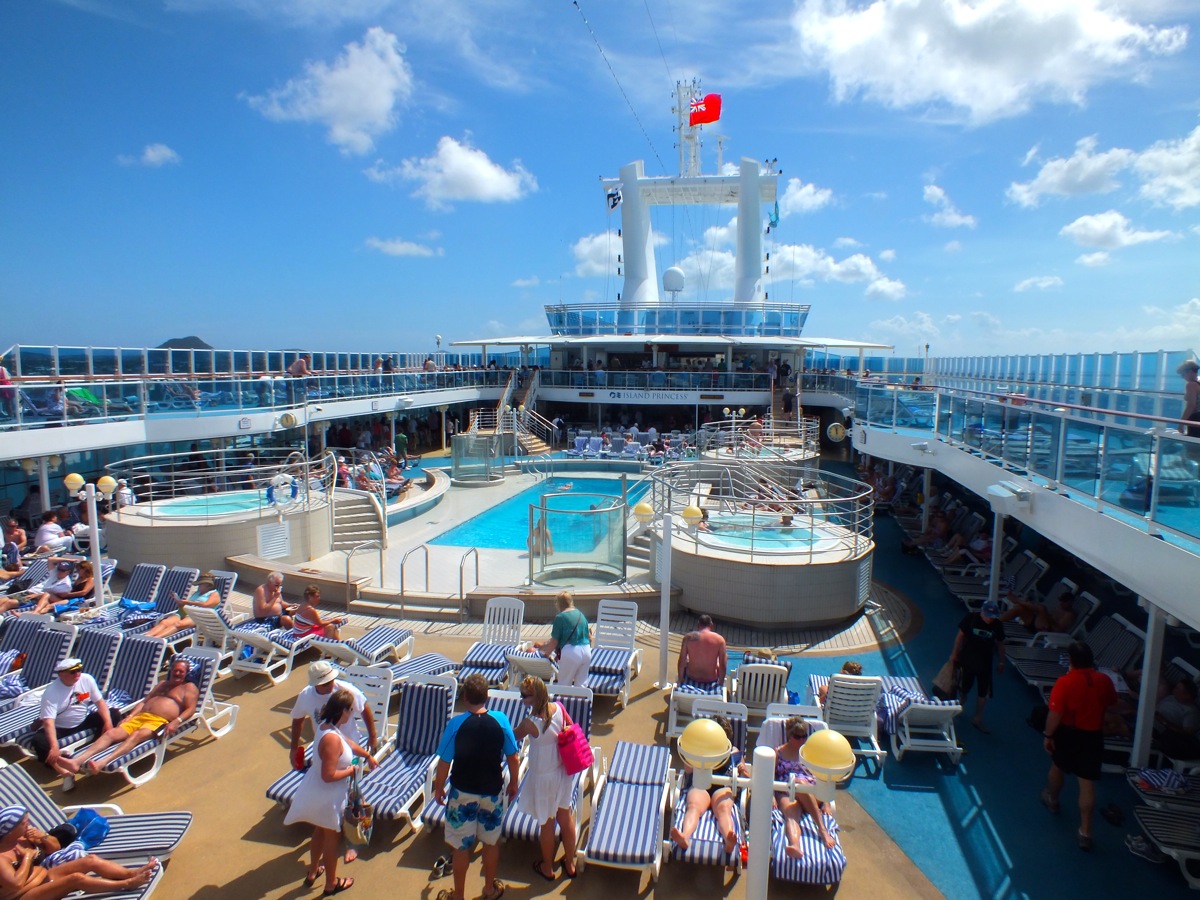 machines. There sold out. If you rush you may be able to pick up a shotgun!! Lunacy. Why? Well after the recent massacre rather than reason prevailing citizens are afraid they’ll be banned – as if!

Leisurely breakfast. Complain to the manager about the crap wifi and carrier pigeon speed when you’re connected. As part of my economic evolution of a business theory (only when it hits the bottom line will they improve and evolve, so I’m helping 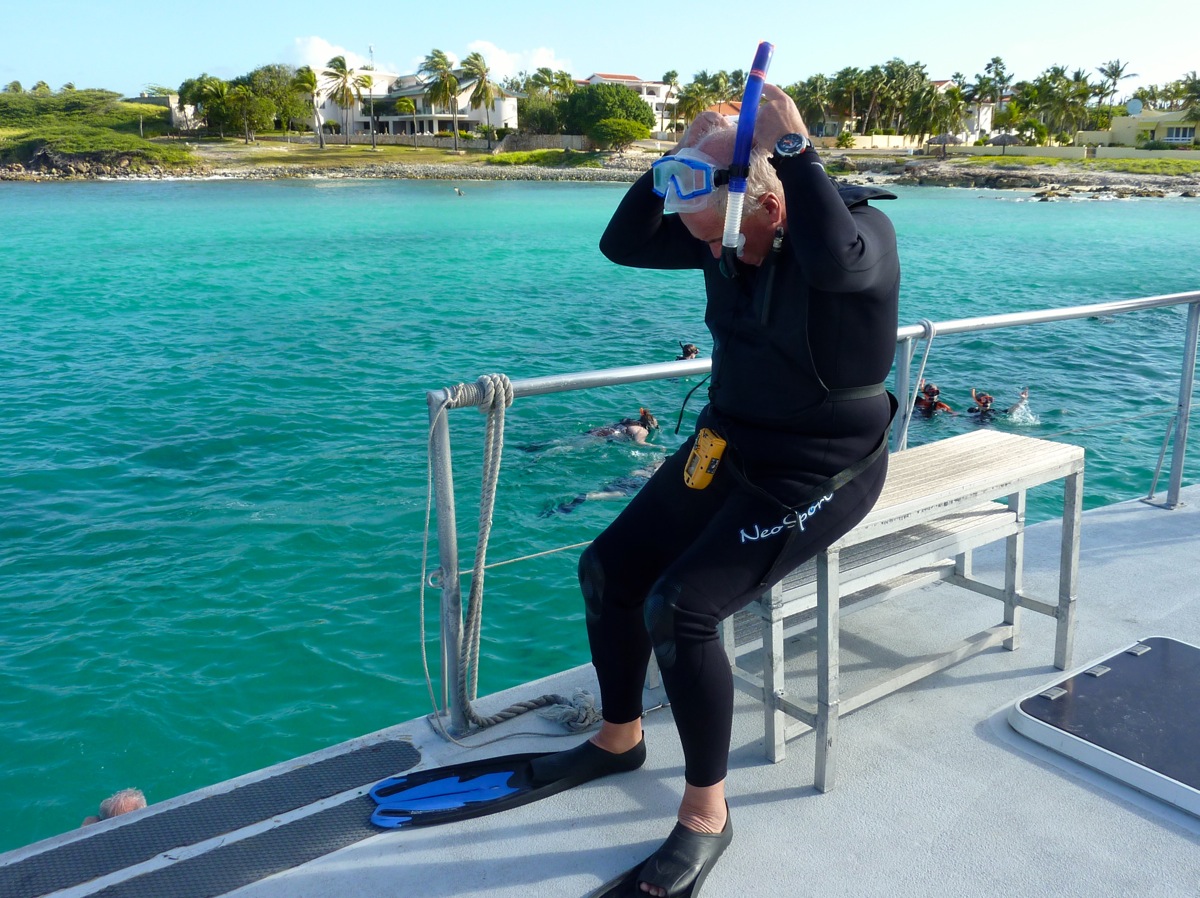 them become a better business) I demand a partial refund and get $25 on a $62 room.

Drive down to the port to drop off the Hertz mobile. Hertz obviously don’t want the business nor do they want their cars back as it’s better hidden than a Utah liquor store. Of course I mention that it would be nice to see a sign – “ah it must have blown over”.

Whisked off to the ship or is it boat. Who knows, who cares, apart from the Captain who gives me some cause for concern as he sounds Italian – offices and crew first! 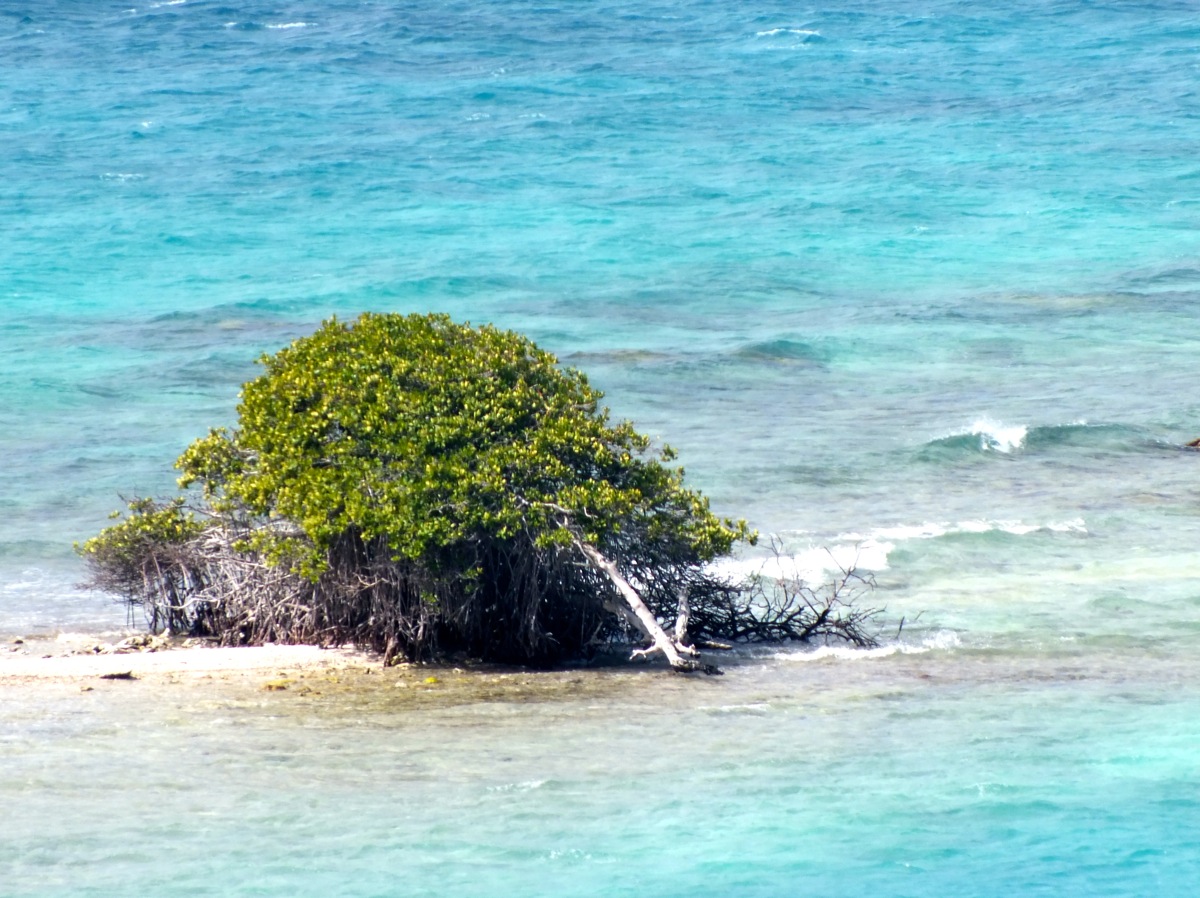 Takes an hour to board and they manage a grand total of 5 queues. Airports look out they’re beating you on number of queues. Overall it was not too bad. Apart from! Queuing to have your photograph taken in front of a mangy palm tree beach backdrop. Good to know they care about customer service so much and inflict a queue on you to start milking you before you’ve even boarded. Make it an optional extra queue for those who want it. Needless to say in true Victor style I refused. Rant over – at least for now. 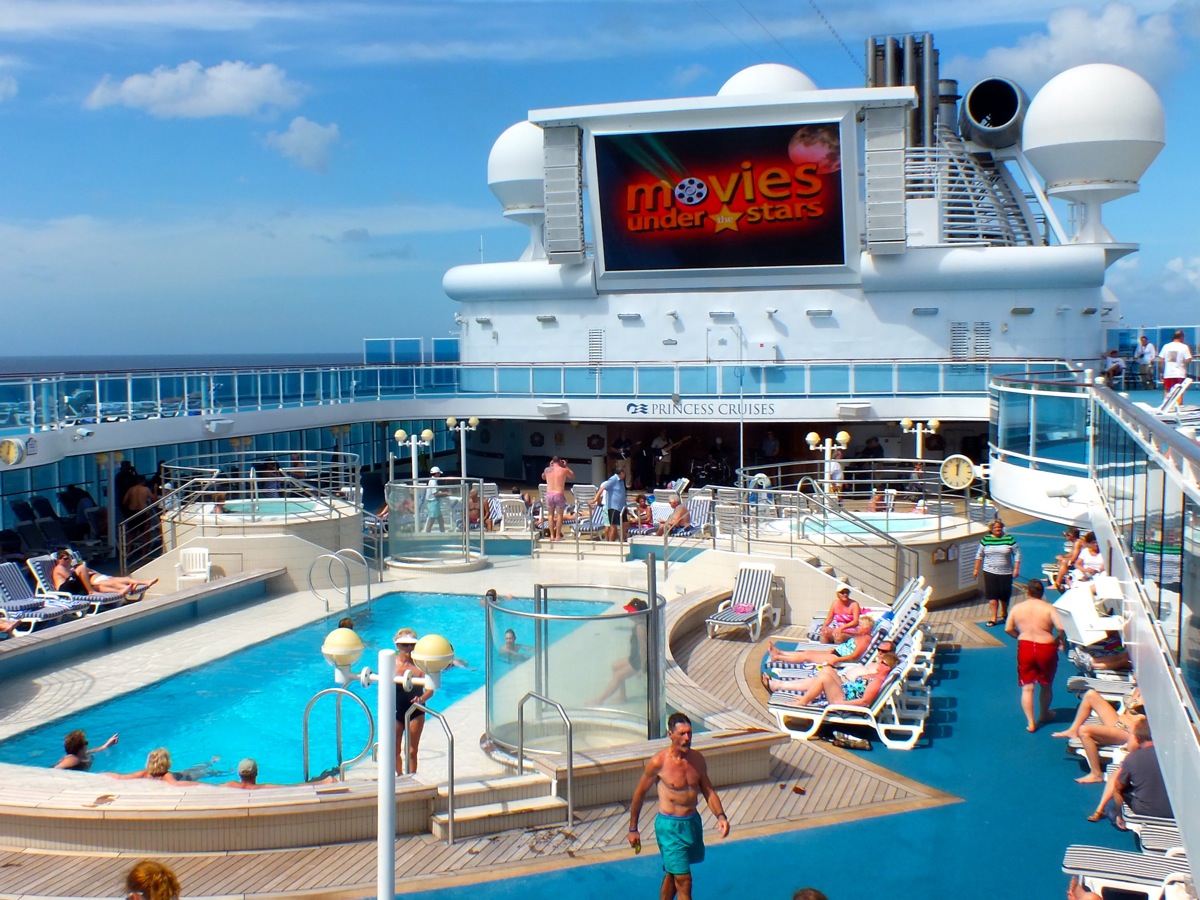 I’m already getting Internet withdrawal symptoms, fingers shaking and hovering over an imaginary keyboard, incessant opening and closing the laptop lid and check signal strength. The hotel last night helped prepare me for our move around to the dark side of the earth. Yes piracy is still rife on the high seas. Wifi is $0.79 a minute. How will I cope? What’s more at these speeds we’ll be home before this blog has been sent.

Also a tad worrying to know we have an Italian Captain! 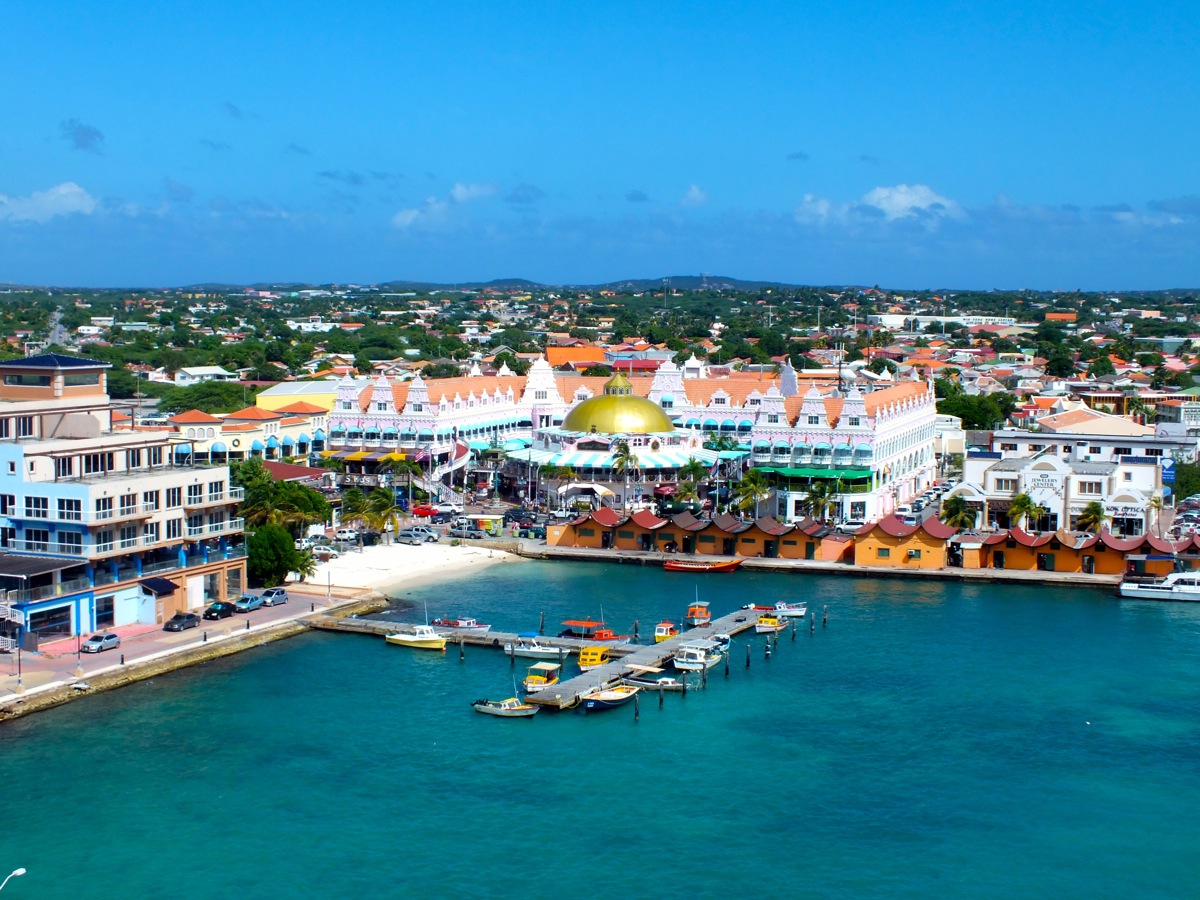 singing and dancing, then an excellent comedian. Mind you the song of the Elvis like alpha male surrounded by scantily clad, glitzy bimbos had the catchy melody  “there’s only on carrot and I’m not sharing it”.

Monday – warm, sunny and rough seas. Pewk bags are out on the stairs!

Good news if there’s some lectures on this cruise with such scintillating subject as colonic irrigation; how to shop – as if Wendy needs that; how to buy jewellery; Go Smile – teeth whitening; the all time cruise classic – “Eat more to Weigh Less”; acupuncture – probably selling needles; bad hair day; good feet – the mind boggles;  photography with a confusing title of basic advance – either way I’m sure they’re selling cameras. Underlying theme, as always, merchandising opportunity. 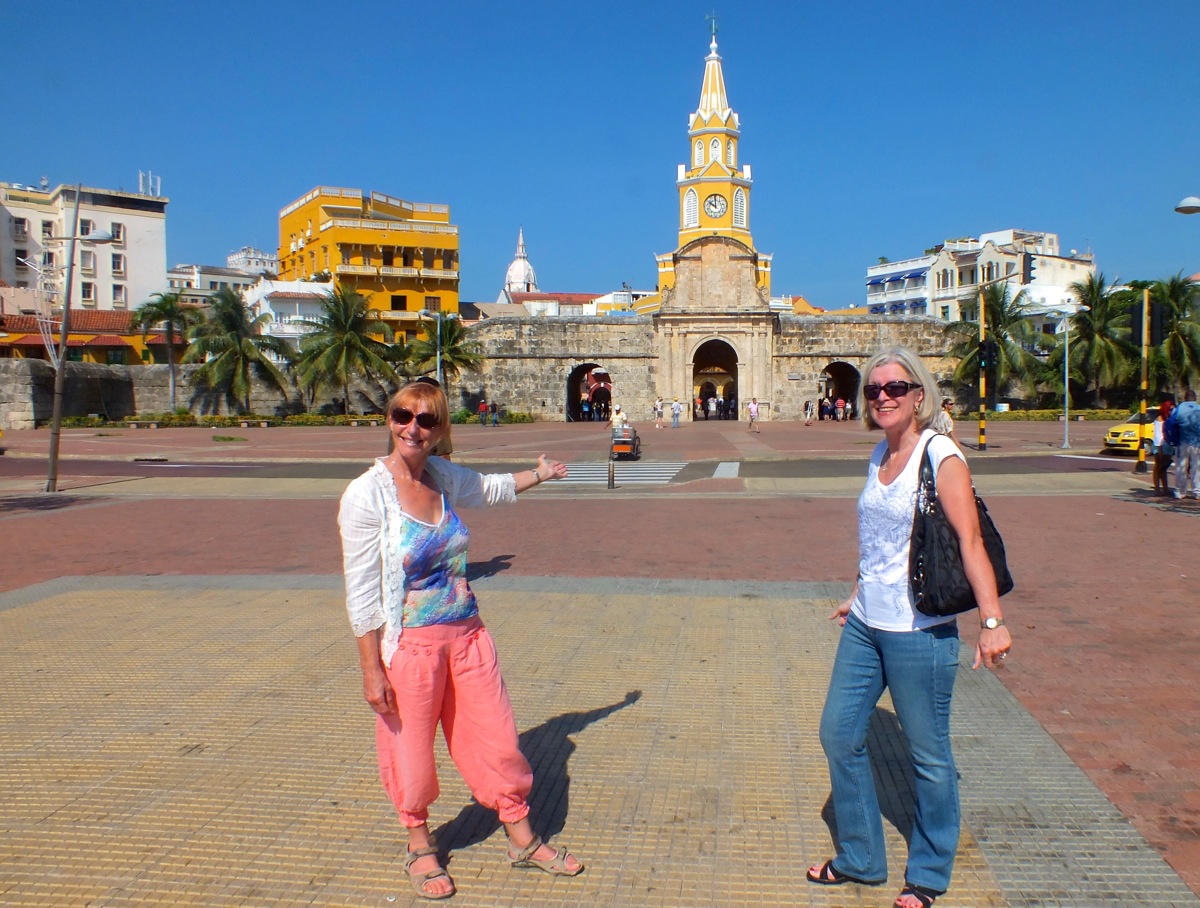 We attend the Bridge lecture, along with a few others, thinking it’ll be an opportunity to learn Bridge. Alas they forgot to mention it was for advanced.

Opted for the Trivia but heavily discriminated against – too many American questions.

Photography lecture was quite informative and only 2 very short commercials. To be fair there is at least an Aruba port lecture, which was pretty good and didn’t really push shore excursions. 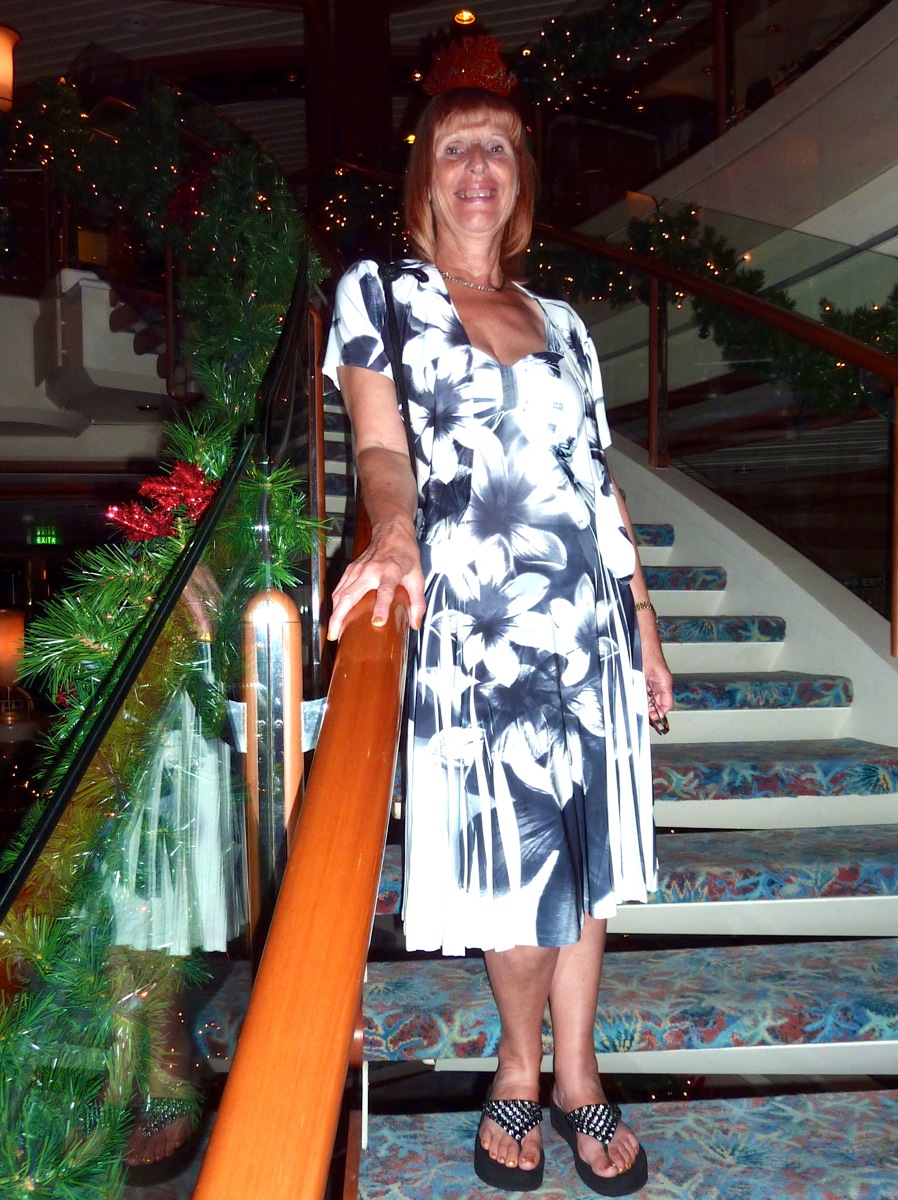 Go for formal afternoon tea. Silver service but alas no cucumber sandwiches. Bit depressing. Full of geriatrics – I know we’ll be there one day.

New Years eve, so dinners a formal night – lobster tails or pheasant on the menu. Means we are commanded to wear monkey suit, tuxedo, dark suit, evening gown or cocktail dress – sex dependent. I make a token effort with my off white jacket trousers, shirt and even a tie, my vibram soled trainers complete my sartorial ensemble. Wendy looks very elegant in her new dress she had for Christmas off me. I really don’t know why we bother, two of the blobbies on our table turned up in scruffy T Shirts. Mind you they were real numpties, had it all arse about face with “we’re getting dressed after dinner”. They could both talk for America.

I’ve no problem with people wearing what the 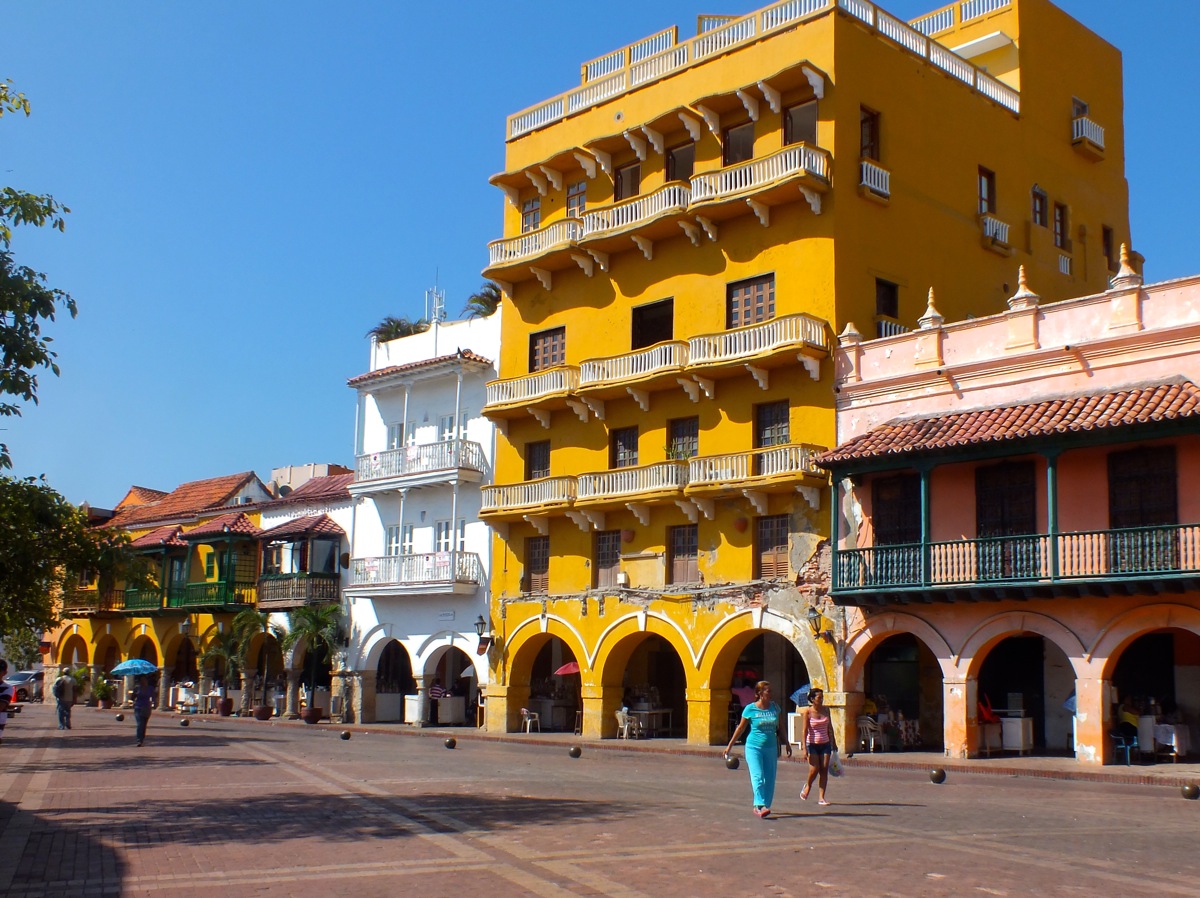 heck they want, we’re on holiday and we’re paying. But if they say formal dress they should enforce it. Why don’t they just say “formal dress for those that want to”. In future I’ll be dammed if I’m going to use my luggage weight allowance on such non-essentials.

Go to the show which has a Welsh las singer comedian – very good. Great voice.

Then we go mad and have a drink in the crooners bar listening to pianist. Sadly most of the bars are deserted.

Manage to stay awake until 10:30 but pass on the midnight party. More food and 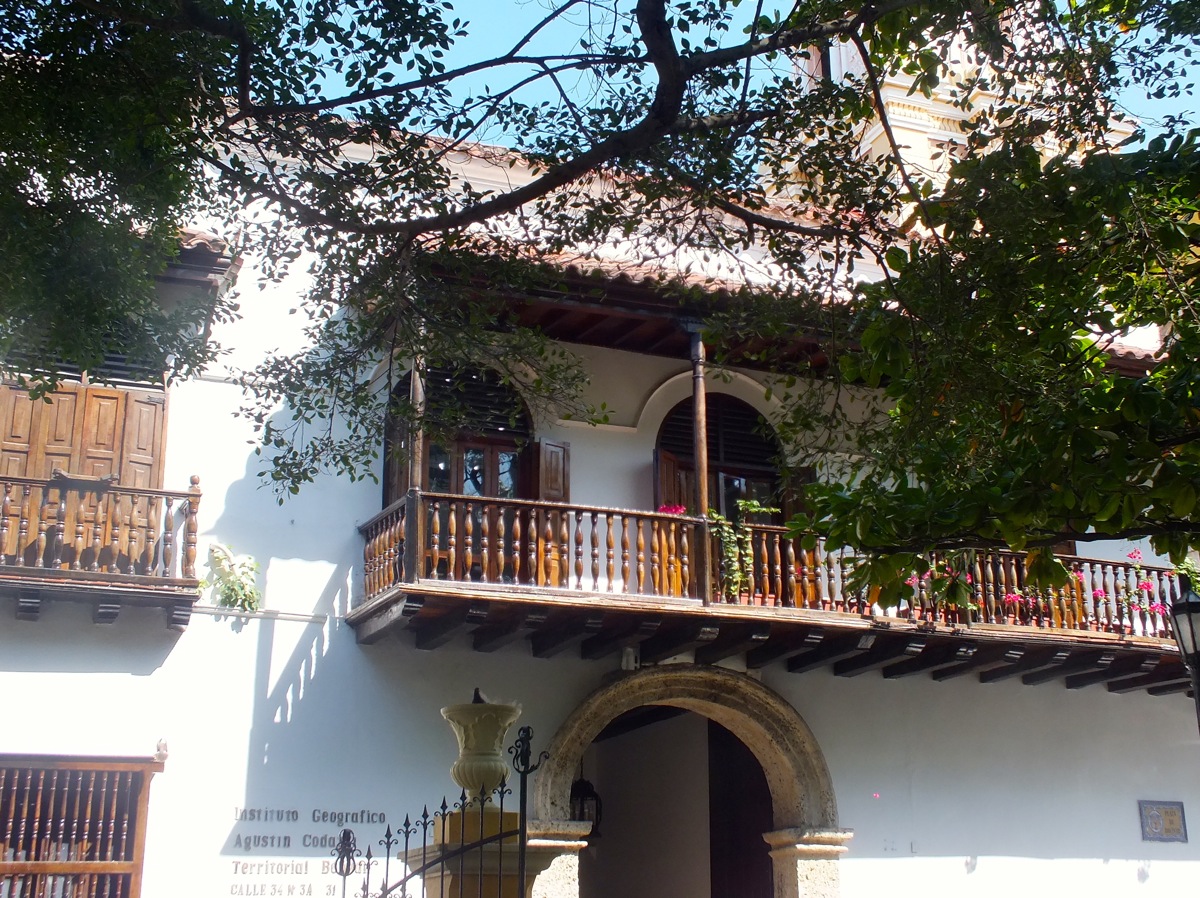 Watching Americans eat is fascinating. Eight of them, forks at the ready and not a knife in action anywhere. What a great business opportunity for “Bite Sized Portions” – food pre-cut into bite sized chunks. You could even branch out into small, medium and large gob sized chunks. Then there’s no need for a knife. Dragons Den here we come.

No current  religious nonsense to talk about but having just completed watching the Tudors perhaps I should mention a few things from our torrid past:

Newly formed Church of England, under Henry VIII, classes anyone who disagrees with them as heretics and proceeds to burn them at the stake – savages. 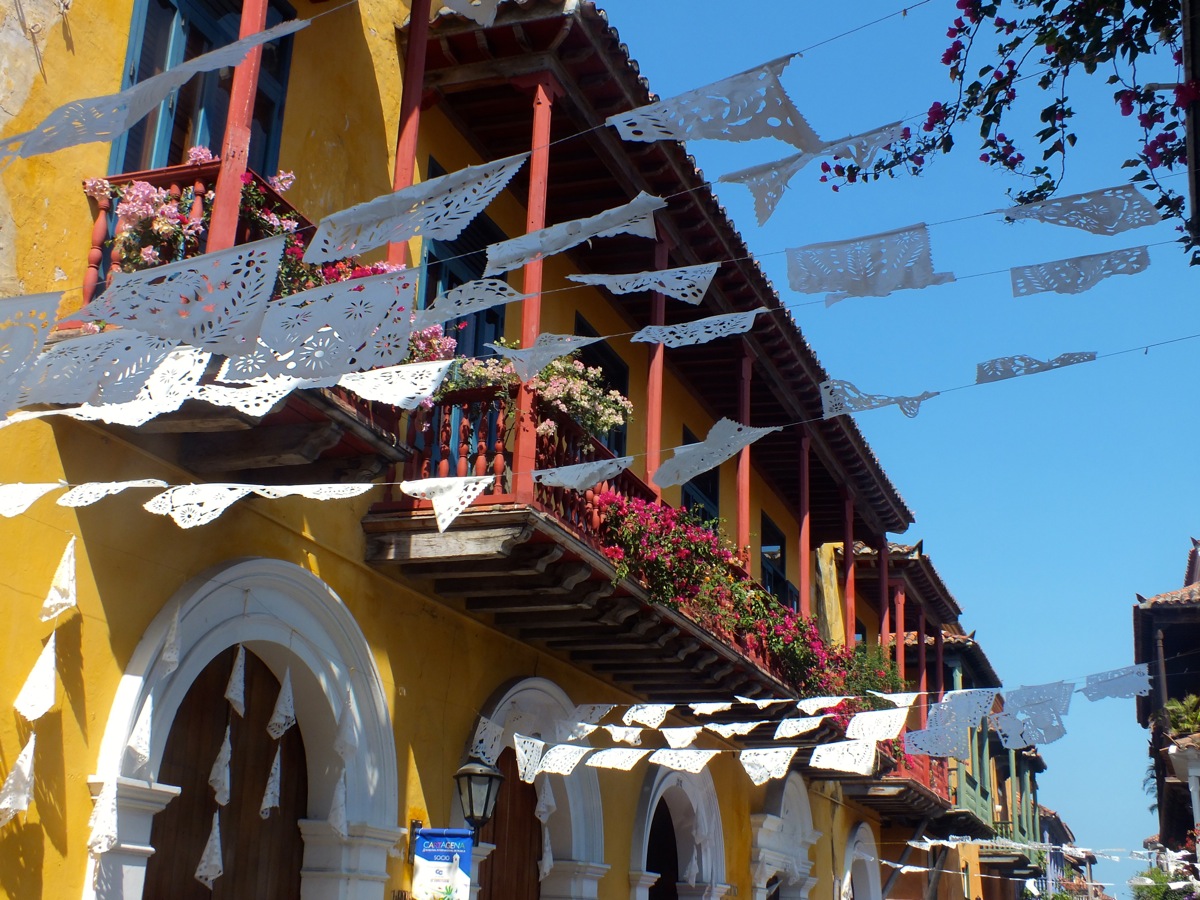 Another sea day of merchandising, phoney lectures and food, food, food! To be fair we went to the America 101 lecture, Cartagena Port Lecture and “Advanced” photograph, all were very good.

Evening showtime was a Motown song and dance. I avoided it. Wendy said it was crap – well not quite those words but that was the sentiment. Then we both went to the stand up comedian. He was good. 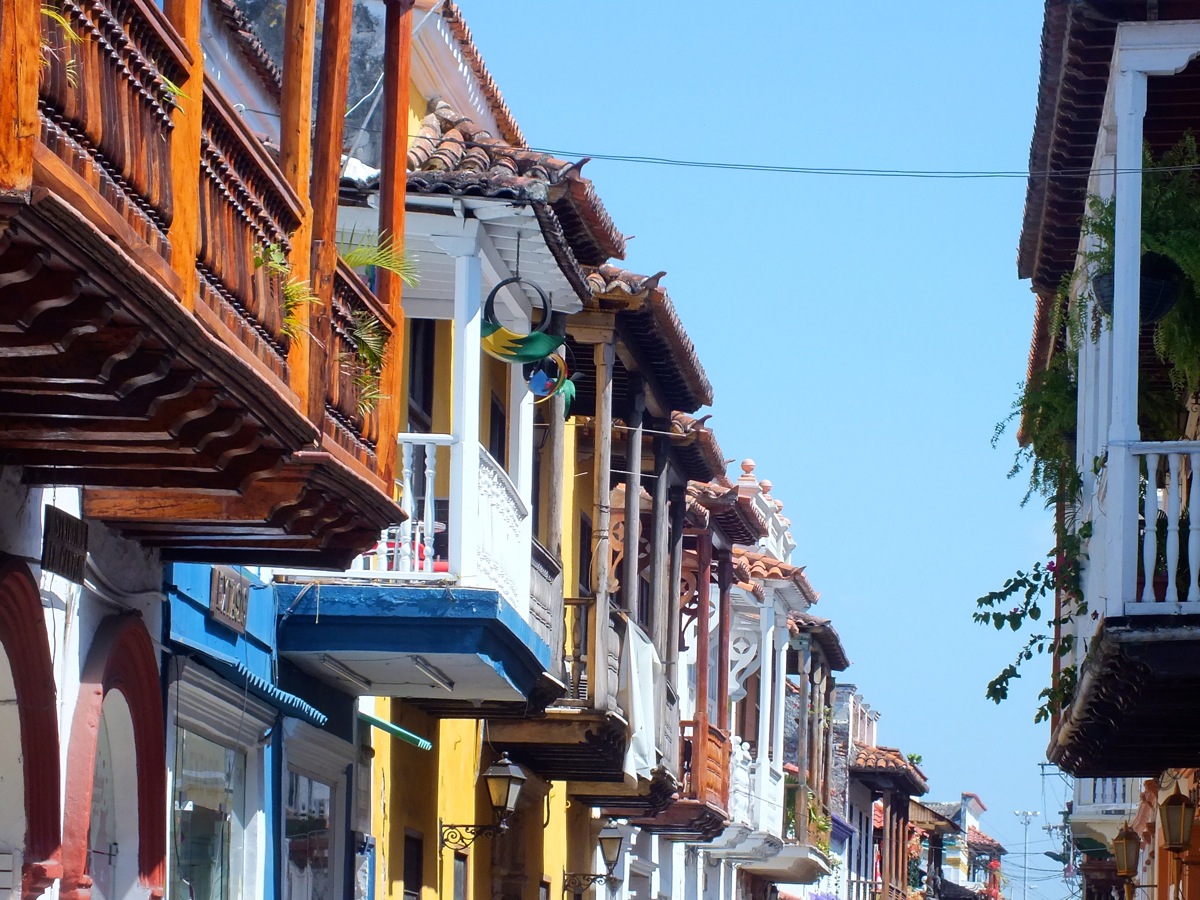 Two snorkelling sites ones in shore relatively calm with a few pretty fish and some rocks. I’m the only with a wet suit but there again I was the only one who didn’t look blue after the event. The 2nd site was at the Antilla shipwreck. Very rough sea but you were able to see the wreck pretty well and it wasn’t too deep. Would have made a good dive as the bottom was only 60 feet and you’d have escaped the rough swell. Wendy came along for the ride; acted as official photographer and enjoyed it and the rum punch. 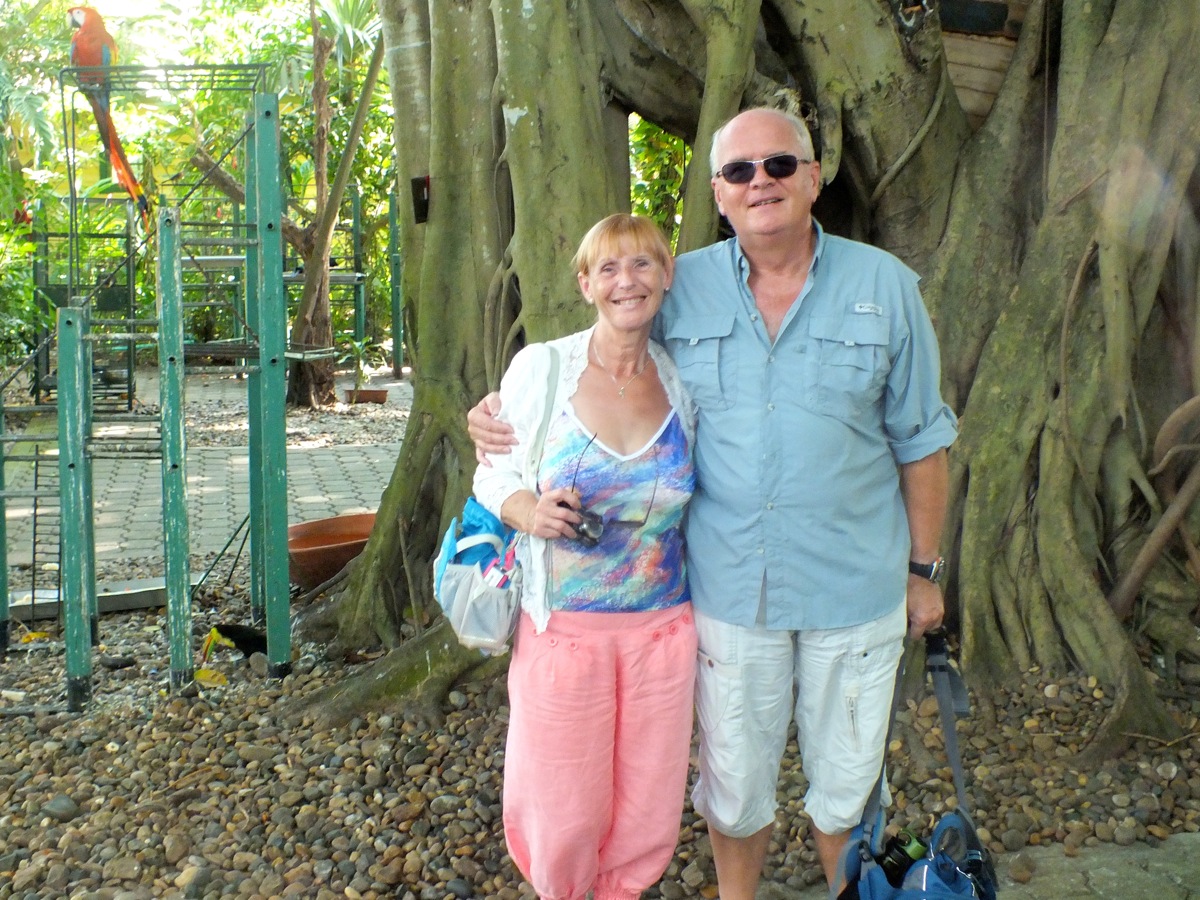 Sadly we Just got back to the port with enough time to buy the mandatory fridge magnet, not enough time for real shopping – I was devastated. Ship departed at 12:30, well it would have done if a party of Italians knew how to tell the time – perhaps it was the Captain.

Well Aruba looked lovely; some great beaches but like most of the Islands not really that much there. Sadly seen one, seen them all seems to be the general consensus on the Caribbean Islands.

Another food opportunity for lunch and did some Obama baiting over lunch with some Americans. Always a topic to get their blood boiling and a few rants going. Is 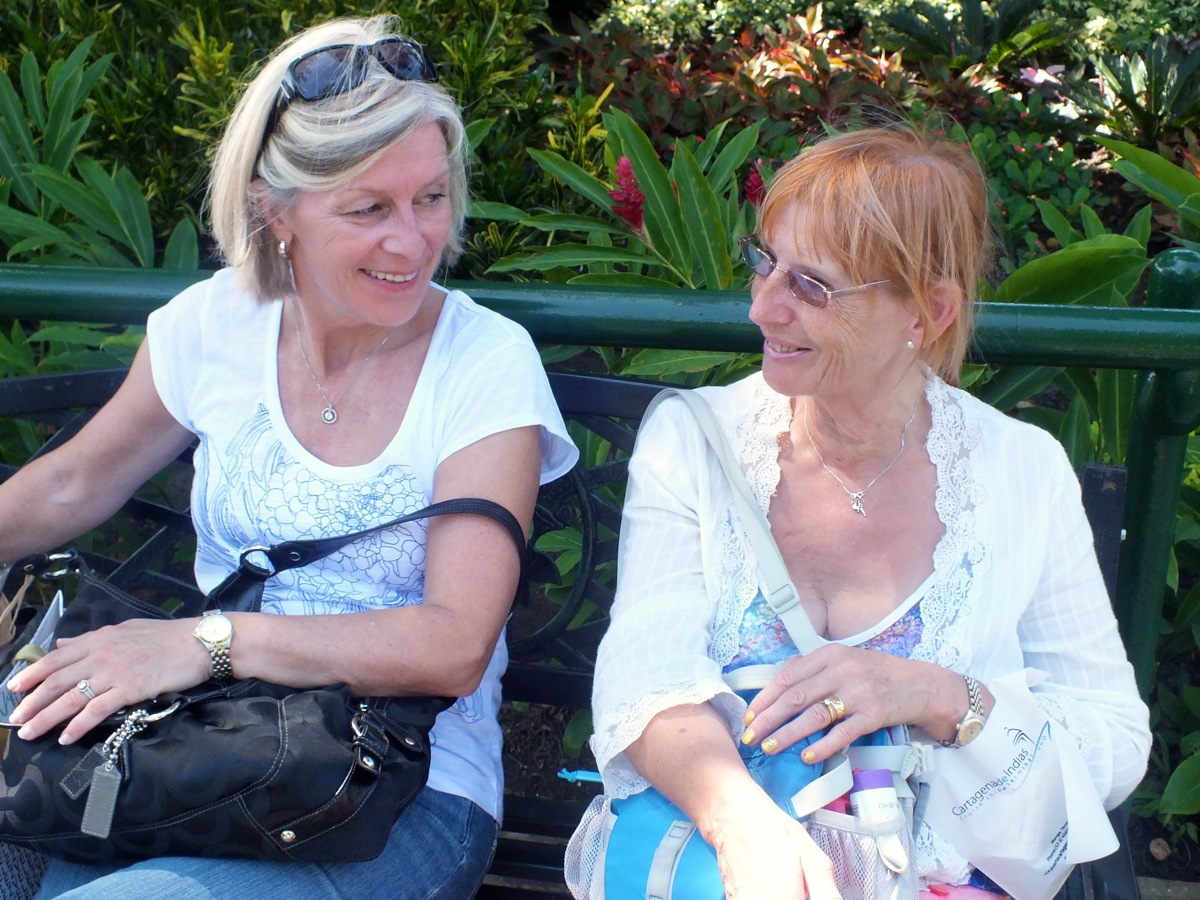 especially entertaining if you encounter a true red neck. I wonder who did vote for hime. Last nights show of hands at the comedy show helped explain why the boat / ship was listing to the right – about 90% Republicans.

Afternoon we do a photo lecture walk about, where the lecturer puts into practice what he’s been preaching. Then it’s a port lecture on Limon, Costa Rica.

Flexible dining again, This time we drop really lucky and have not one but two professors on a table of 6. Subjects Statistics and Psychology, both an aid to a good nights rest. After mentioning how Ice cream is a cause of drowning at least one of them quietens down.

Showtime was a not so good hypnotist – cheap entertainment. 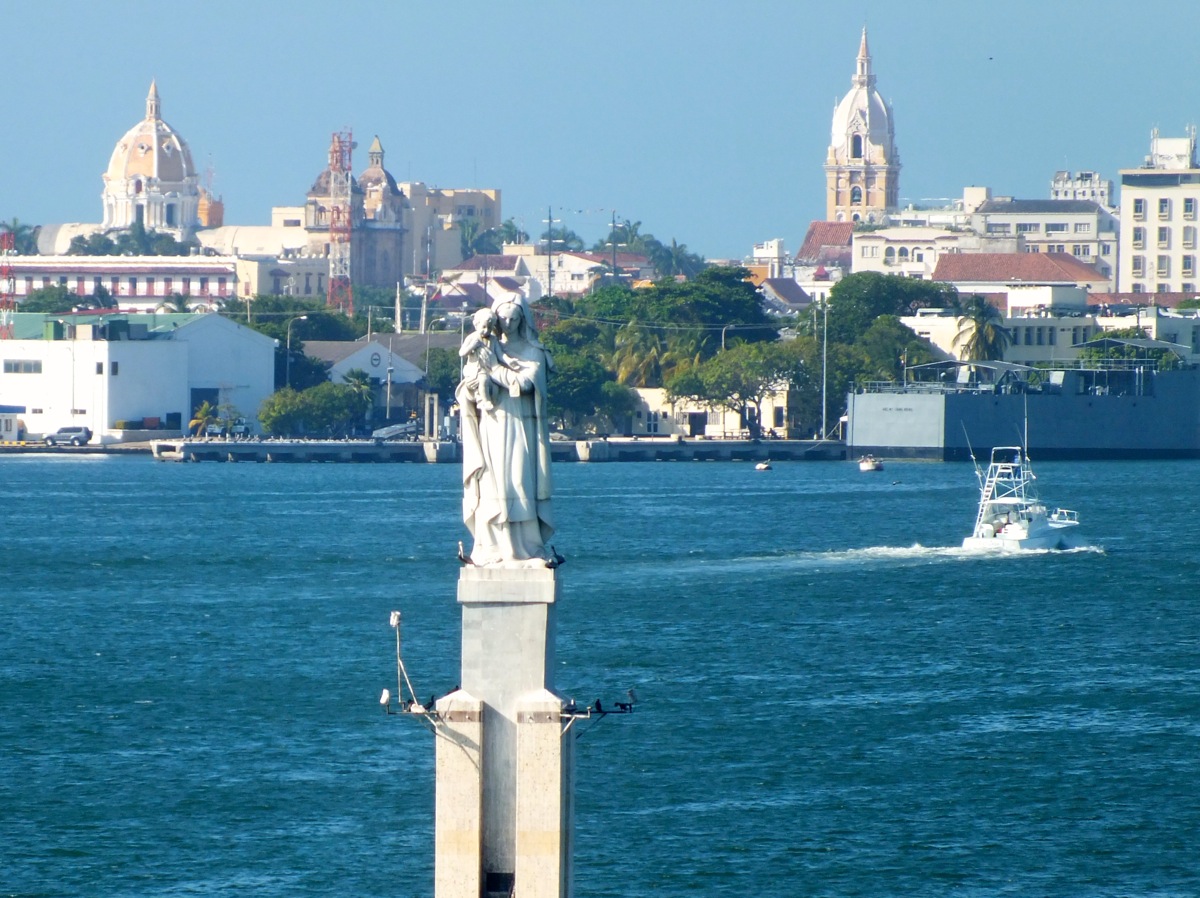 It’s Cartagena, Columbia today. Hook up with Alec and Ann for a taxi ride from the port. We then all have a shuffle around the old Town. It’s a UNESCO World heritage site. Lovely old town. We were quite surprised how clean and pleasant it was, with some stunning balconies. You would be able to see pictures if I could afford the wifi. Wendy and Ann spent quite some time in the shops. I think Ann must be a very devout religious person as her approach to shopping is “it would be a sin not to go in these shops.” Alec and I found a great coffee shop, complete with free wifi (picked up emails on iPhone but alas no Facebook) and thankfully air conditioning. Juan Valdez coffee was some of the best Columbian coffee I’d ever had.

Boy was it hot outside. Fortunately most of the streets are shaded.

Well we survived Columbia. Didn’t get shot; mugged; robbed; raped, and no one tried to sell us any white powder. Apparently those are the highlights of one of tomorrows ports of call in Colon, Panama. What a lovely sounding place. With a name like that; all the crime and high rainfall just think of the challenge the marketing director for the tourist board faces trying to promote it.

Cruise departed at 14:30, seems another short port stay, but just enough time to enjoy a pleasant stroll around the old Town.

Afternoon consisted of cruise lecture on the Panama Canal – tomorrows port of call.

PICTURES WILL BE ADDED LATER WHEN WE GET OFF THIS PIRATE SHIP.

Continued details of the Revocation of Independence are posted below.

You will cease playing American football. There are only two kinds of proper football; one you call soccer, and rugby (dominated by the New Zealanders). Those of you brave enough will, in time, be allowed to play rugby (which has some similarities to American football, but does not involve stopping for a rest every twenty seconds or wearing full kevlar body armour like a bunch of nancies).

Further, you will stop playing baseball. It is not reasonable to host an event called the World Series for a game which is not played outside of America . Since only 2.1% of you are aware there is a world beyond your borders, your error is understandable. You will learn cricket, and we will let you face the Australians (World dominators) first to take the sting out of their deliveries.

You must tell us who killed JFK. It’s been driving us mad.

An inland revenue agent (i.e. tax collector) from Her Majesty’s Government will be with you shortly to ensure the acquisition of all monies due (backdated to 1776).

By the way we are not taking on your National Debt, we’ve got enough of our own. You got yourselves into it so you can pay your way out. However we will be imposing some austerity (look it up) measures. We are also recruiting for a financial guru to help you out of the mess. Bwankers need not apply as they got you into this mess and haven’t a clue on how to manage joey. The ideal candidate will be a working Mother with 2 or more kids who has successfully bought her family up on a low income without getting into debt problems.