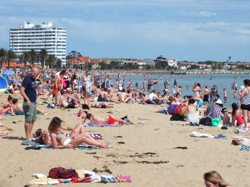 How variable the weather can be. One minute 16C the next 32C, such massive variations.

After a morning cleaning up, well to be honest Wendy doing most of the work and me battling with SQL, we drive down to St Kilda for a stroll along the beach.

The roads into St Kilda are gridlocked. The suns bought everyone in the Southern hemisphere to this beach. Hardly room to park a handkerchief on the beach, never mind a towel or a thong (that’s an English one) like bikini bottom. Worse than Blackpool in it’s heyday. Not a knotted handkerchief, black socks, braces and deck chair anywhere to be seems. 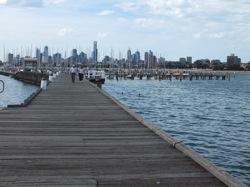 Lithe young female bodies strewn everywhere. Oh to be young again in body, instead of a 16 year olds mind trapped in a 60’s year old body.

Call in at the Beachcomber Restaurant to hand over a Red Cross food parcel to Simon and Hayley. It’s Bedlam. They’re even queuing to get a table. Looks like hard work to me.

Have a drink and a stroll down the beach and along the pier.

Then it’s back home for dinner and packing.

Monday – up at the crack of sparrows again. 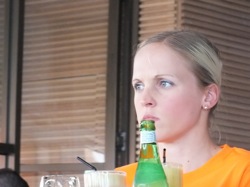 Whatever happened to those halcyon days when air travel was exciting and an enjoyable experience. Long gone. Replaced by a series of queues and processes designed to inflict the maximum misery. Sadly I don’t think there’s any concept of customer care or service. It’s almost as if the whole shebang is doing you a favour.

Yet, I have to confess that once on board, even Quantas, go out of their way to provide a good service. You feel like a customer again. 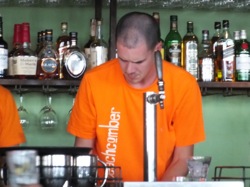 Well it’s goodbye Oz. After 10 weeks we still can’t understand a word of the airport announcements that jabber out.

What did we like about Oz. I have to say most things. People were very friendly and it’s very English. Weather is great, you get to see the sun nearly every day. Fantastic scenery and generally very civilised.I won’t mention the scrots on the tram, sadly, that’s the same the World over.

What didn’t we like. Well really there was very little – yes this is 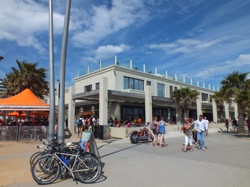 Victor’s blog – and I have to scrat around for something negative to say. I suppose the vast distances; road works; traffic and most of all those left hand lanes that fizzle out with a sign “Left lane ends – Merge right”. Personally I felt right lane having to merge left is safer.

Whilst I think we’ll still concentrate on the USA, it’s a lot cheaper, we have to say that Oz has the real benefit of being so much more English – sad the English at large!

The acid test is would we come back. Yes, absolutely, despite the long flight. I’m up for November and December next year, not so sure that Wendy’s so keen so soon but we already have enticing opportunities. However if we do it again I think we’d do the trip in one day. Stopover was good to see places but it means two days of misery in place of one and double the airport misery. Better to get it over with in one hit. Also I don’t think we’d travel such distances. Once here we’d choose a destination / area and stick to it.

Areas of choice would probably be Sunshine Coast, Tweed Coast and Melbourne.