Wednesday – warm, cloudy and some showers in the afternoon. 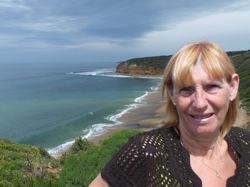 Up at crack of sparrows.

Drive through Melbourne traffic to the great Ocean Road. Actually built by survivors of World War 1 as a memorial to their fallen comrades.

One of the top ten scenic drives in the World.

Call into Torquay and look at the famous surf beaches, otherwise not much else there. 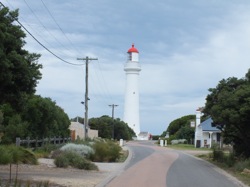 Then it’s Anglesea and the lighthouse at Aires Inlet. By now it’s 28C, humid and for the first time the flies are out.

Drive on to Lorne and have another exotic lunch in the park. Then to Toms lookout for yet another photo opportunity. 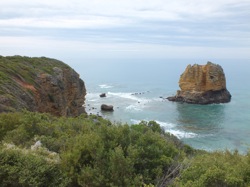 Finally get to Apollo Bay and find a Motel for the night. Start off at the Comfort Inn but the rooms like a murky prison cell. Abandon and find a pleasant apartment in a Motel.

Free Wifi and its unlimited. What they forgot to mention is you can’t get a signal. Why is it so difficult!

Disappointing choice for dinner. No Subway; no MacDonalds; not even a sausage barbie. 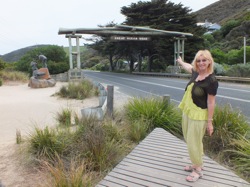 Call into a drive in bottle shop – off license. Good ole Bruce on his way home to Sheila can drive his Ute in and pick up a slab (24 pack) without having to get out.

Watch the Ned Kelly DVD. Villain or hero? Must say this interpretation is more of hero outlaw, much wronged by the corrupt police of the time – a lot of police in those days were ex-convicts. 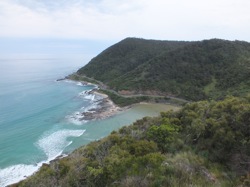 In view of the weather we give up on our drive down the other half of the Great Ocean Road. Looks like we won’t get to see the 12 Apostles. Just not worth the extra 2 hours drive in pouring rain, making a total of 6 hours driving. I’ve put some pictures off the Internet to make up for it.

Decide to drive back along one of the highlighted inland tourist routes. Gourmet and wine route it says on the map and 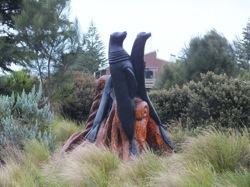 recommended by tourist info lady. Mind you she’s the one who said it best to see the 12 Apostles on a day like today as you can better picture the ship wreck coast in storm and tempest – mad as a hatter. 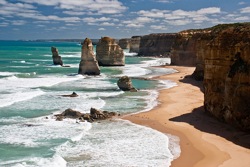 Anyway back to our route. She seemed to forget to mention that it was a single, almost dirt track, mountain road and I should have a machete and chain saw with me to clear away the fallen trees. Despite it all we made it. Can’t recall much in the way of food or wine offerings along the way.

Now for some cultural enlightenment – How to eat a TimTam Ozzie style: 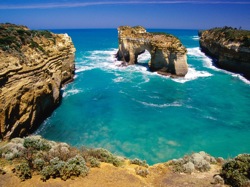 1 Bite off the top left and bottom right hand corner at an angle of 45 degrees. Yes you can eat those bits.
2 Have a cup of hot tea ready.
3 Gripping TimTam in mouth dip the the bottom half in the hot tea and suck for all you’re worth.
4 Quickly lift TimTam out of the tea before it melts.
5 Continue sucking melted TimTam core through the middle.
6 Eat the rest of the TimTam

Foreign aid. What a load of whackers our politicians are – see foreign aid map. 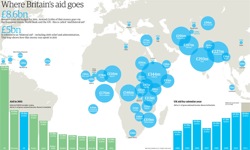 £93Million to Somalia. A country that has just stoned a woman to death for “having a naughty” (sex); is a hotbed of terrorist activity; famed for it’s piracy; has had £85 Million of foreign aid “go astray”. Why do we support such barbaric countries. On top of this they send Millions, of money that we don’t have, to India and Pakistan who are that strapped for cash they can afford a nuclear weapons programme and India even has a space programme. I’m spewin. 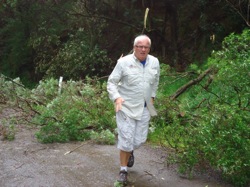 How can these politicians live with themselves. Marvellous isn’t it we’re not near the top in many World rankings, but when it comes to foreign aid as a % of Gross National Income we seem to excel.

Foreign aid definition:
The transfer of money from poor people in rich countries to rich people in poor countries.

Usually nothing good to say about the French but at least they don’t stand any nonsense:

France kicks out devout Imam who called for jihad, Jewish genocide and corporal punishment of woman.

Oh dear how sad! Pity our PC, do gooder, numbskull politicians don’t do the same.