Up early for the long drive up to the Ned Kelly country and our tour along the great Alpine road.

To relieve the boredom and keep me awake a kangaroo bounces out. If we’d have been a second earlier then Wendy would have been rattly away from inside a roe’s pouch. 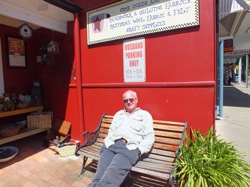 Stop at Bright for lunch. A lovely little tourist town fortunately not spoilt. This seems like a great location for a house swap. Plenty of walks, places to see and plenty of character. No big cities. An Ozzie equivalent of Sedona

Waitress is one of the most bubbly we’ve ever encountered and very helpful. Must be the mountain air. 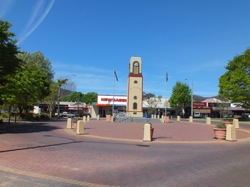 Take the long windy drive up to Mount Hotham.Then drive on to Harrietville an even smaller and less spoilt village – very quaint. Everything seems to centre around the general store, come post office, come petrol station, come tourist shop. You name it they sell it. Another lovely location, unspoilt despite the ski trade. 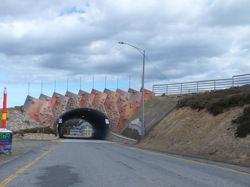 We stay in a lovely 5 bedroom ski lodge at Dinner Plains – yes that’s the name of the ski village. It’s practically deserted. Go out for dinner. With a name like Dinner Plains there should be plenty of choice. Wrong! We’re lucky the central hotel is open. What’s on the menu? It’s a barbie, that should be good – these Ozzies know a thing or two about barbies. You can have 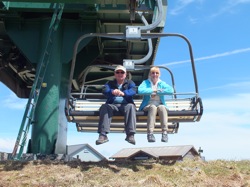 sausage, sausage or sausage. To be fair there were 3 different types. Guess I’ll have a sausage.

Have to say it was very enjoyable and our Canadian chef went out of his way with the condiments and his home made blueberry barbie sauce. Then totally unsolicited he bought out a load of his home made fudge for us and gave us a cartoon of his barbie sauce to take home. A real character even if somewhat eccentrically dressed in a banana suit – apparently his Canadian Sunday church wear! A great and memorable evening. 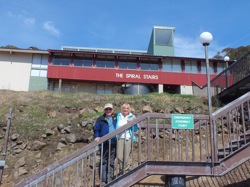 Delicious bacon and eggs for breakfast – my first in Oz.

Then we have a wander around the delights of Mount Hotham ski resort – it’s deserted. It’s a shame to see a grown man cry – not enough snow to ski on and the lifts were shut. I have to pass on my ambition to ski in Oz. 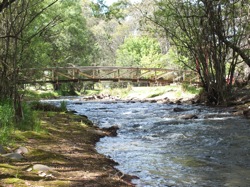 Have a look around where Kurt worked when he was up here – how anyone can call being at a ski resort work amazes me. How lucky can you get.

At least the general stores open for coffee.

The Great Alpine Road certainly lives up to its name. Stunning views, goes straight through the ski resort and is a typical mountain road with switchbacks, z bends and some great drop 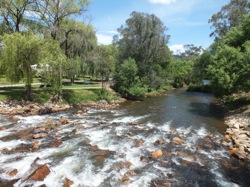 offs for the unwary. Must be real fun when icy.But at least there’s signs on the road edges telling you to keep left or right rather to avoid dropping off the edge Seems some what obvious in summer but I suppose in winter when there’s snow banked up you can have numpties driving off into oblivion. Mind you it’s amazing that some scrots 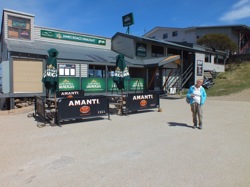 On the way back we call in Bright again for fridge magnets and lunch.

Then visit Wangaratta, what a great sounding name, doesn’t it just roll off the tongue. Sounds typically Ozzie.

Apparently Ned Kelly’s last stand was in Glenrowan on 28th June 1880 where he was captured and carted off to Melbourne jail to be hanged.