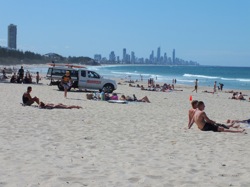 It’s our last day here. Up early to clean the house etc. drive down to Coolangatta to pick up the Hertz – nice Ford Focus auto and yes it does have cruise control. Pick Pam up and take her out to lunch at the Burleigh Head Surf Club. Great views right on the beach. Call in to say goodbye to Peter and drop off some Avo’s – if you don’t know what they are see my guide to Oz language. Then it’s home for a leisurely last night.

The Oz language seems to be follow some simple guidelines:

Excerpt from a speech Steve Jobs – y’know the Apple geezer – gave in 1983:

“Apple’s strategy is really simple. What we want to do is we want to put an incredibly great computer in a book that you can carry around with you and learn how to use in 20 minutes. That’s what we want to do and we want to do it this decade,” says Jobs. “And we really want to do it with a radio link in it so you don’t have to hook up to anything and you’re in communication with all of these larger databases and other computers”.

Then to quote a luddite boss of mine “then along came the iPad”. That speech was almost 30 years ago – what vision. 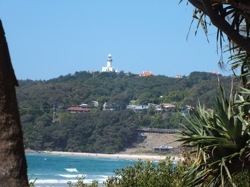 “Ahmed Abdallah, a Muslim television preacher in Egypt, has been charged with blasphemy against Christianity. Abdallah was videotaped tearing up and burning a Bible in a protest in Cairo earlier this month.

Abdallah told Al Jazeera that he’d do it again if Bibles were not so expensive”.

Up early ready for the trek down to Sydney. What a great home exchange we’ve had. Dropped really lucky. Fantastic home and great unspoilt location in midst of so many National Parks. We’ll really miss the early 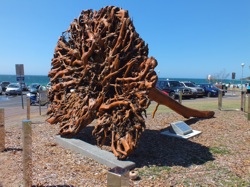 morning bird calls, especially the Cukaboroo; breakfast on the deck looking out over the forest and the Gold Coast. Seeing Pam again and meeting and eating with her friends made it great stay.

Really civilised on the roads here. They have “Driver Reviver Stations”  where you can Stop, Revive, Survive. Free coffee – how very civilised.

Only going as far as Byron Bay today so we drive around the Tweed Coast. Really nice small towns. If ever we came back would be a lovely quiet place to stay.

Road into Byron bay is a nightmare. 20 minutes traffic jam the place looks very busy – is this a big mistake? Find a trendy up market Motel on the outskirts, reasonably priced, and have a walk down to the beach. All very pleasant. Great example of beach life. Have a walk along the lovely front and back down the beach. Wendy chickens out at walking up to the light house – too far. 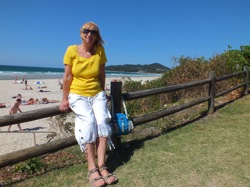 Stop off on the corner cafe for coffee and some people watching. A lovely way to pass away the afternoon. Then it’s a wander around the shops – joy. Wendy gets really excited when she sees a Aldi.

I’m sure thongs must be a bell weather of the Oz economy. Sales up economies doing well.. Then you have the economic terrorists wandering around naked, thong less, must be an considered un-Oz activity.;
some wear odd thongs, different colour on each foot; then you have the old lady struggling along with her zimmer frame in a pair of thongs.

Tattoos seem to be another Oz essential. I’m sure some have that many tattoos that they don’t need to wear a shirt; one bikini clad Sheila had a half a novel 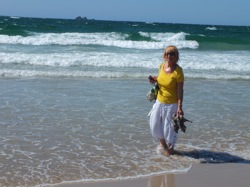 written across her body, I was tempted to go up and read it but thought she may be offended; another had a poem tattooed on her back. Then you have the ultimate in minimalist tattoo on the arm of another Sheila – 16. What the hell does that mean? Is it her age 10 years ago; dress size; her door number in case she forgets; date she lost her virginity; number of children – who knows.

Meanwhile I now know we live in rip off Britain. I though Oz was expensive but I’ve just been pricing up a new Mac Air. Even with an educational dissent in the
UK they’re at least 15% cheaper over here and nearly 25% cheaper if you reclaim the tax when you leave the country. In Hong Kong and the USA they’re nearly 30% cheaper. Am I surprised?