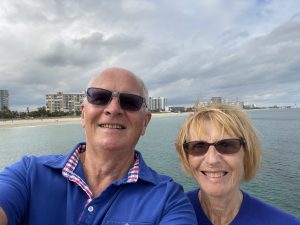 Rain forecast and again the forecast was right.

Never mind there’s unfettered joy as we head off to Publix supermarket. Alcoholic lemonade, how about that. They call it Hard Seltzer, 5% alcohol, only in America.

Evening see’s the demise of an excellent bottle of Carmenera, too good to allow remains to oxidise overnight, manned up and polished it off – awesome. Finished watching Jack Reacher series. 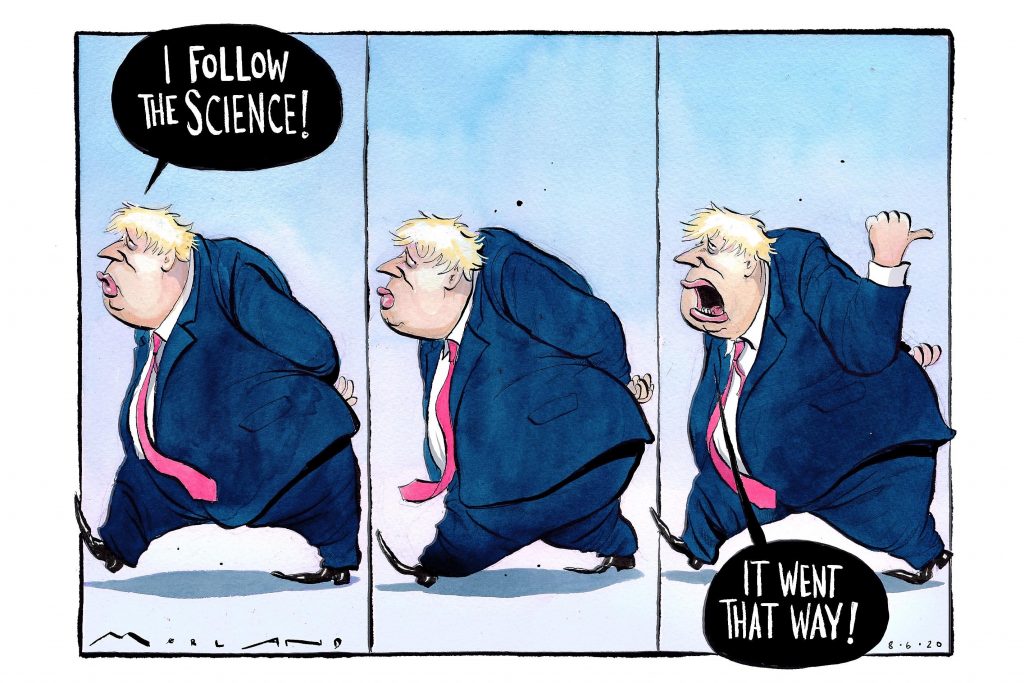 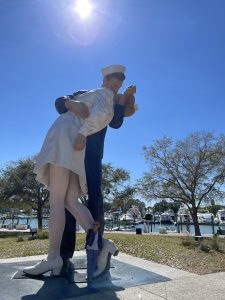 A gorgeous warm sunny day so we toddle off down to Sarasota Bay Front for a stroll around and a coconut shrimp lunch for Wendy. I get treated to a cup of typical black American dishwater coffee. 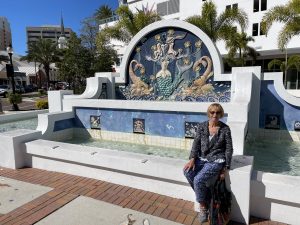 Then have a stroll around Sarasota and Wendy is orgasmic as she gets a visit to WholePayPacket (aka Wholefoods). Then, despite having to pay a Kings ransom for everything, no wonder they hide the prices, she begrudges me some Shark Steak and Mahi for tea. 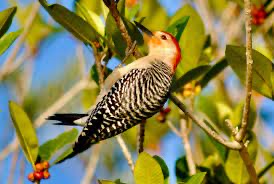 What a great start to the day as I open the door to see how warm it is and there on a palm tree is a beautiful red bellied woodpecker singing his morning song. 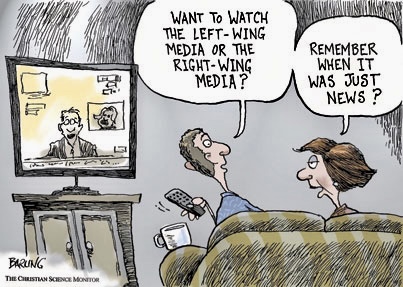 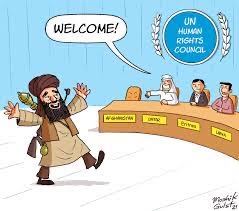 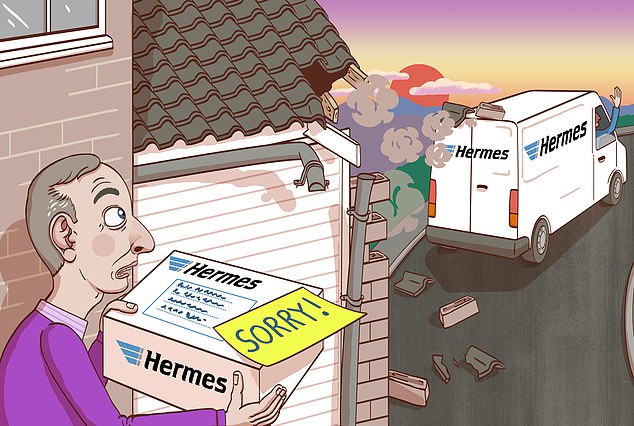 What is it with USPS. Every time we encounter them they seem to screw up. They missed yesterdays delivery deadline, then claimed they’d delivered it at 14:55 today. Alas no parcel on the doorstep. Turns out the parcels small enough to hammer into the post box on the street. As a Brit we expect delivery to the door. Just one of the things that we excel at.

Lazy morning but then off to a free Big Band concert in Phillipia Park. Then have a stroll around the park and Wendy enjoys her butty for lunch. Sat watching them fish and just about escape having an eye removed by a casting shrimp on a hook.

Back down to Turtle beach for some beach time, but after 30 minutes we’re melting. Back home for afternoon tea and some reading. My it’s hot. Take to the shade. 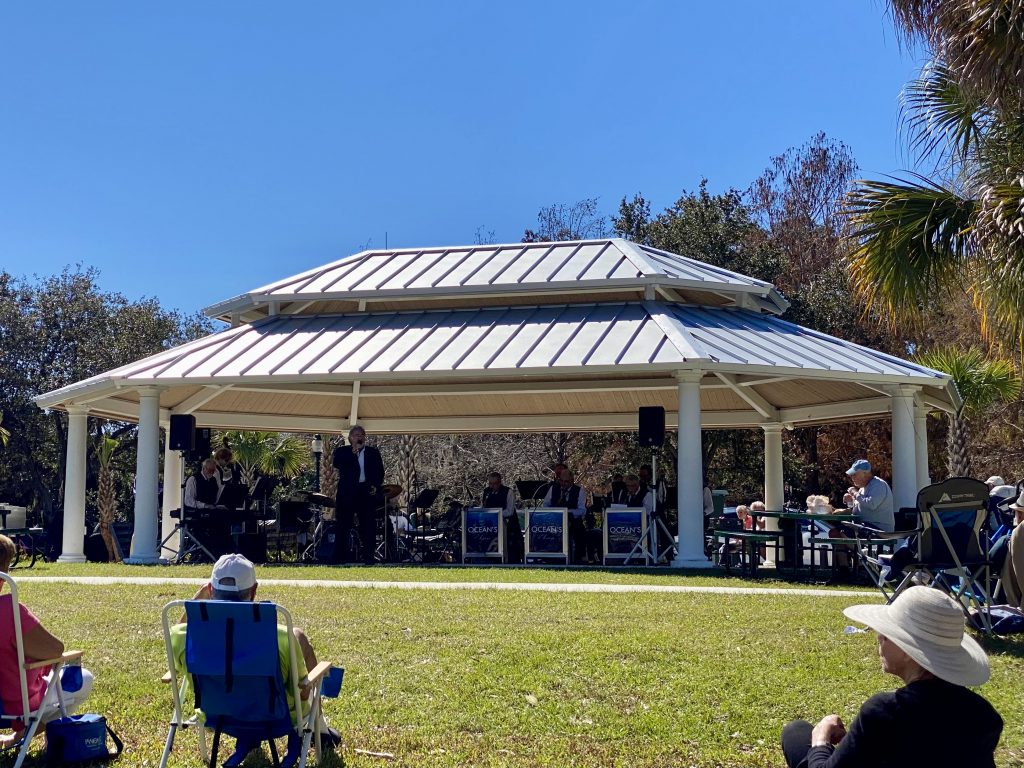 Free Oceans Eleven Big band performance in the park, in the sun, with all the rest of the waiting for god brigade. Is this what life’s come to? And now, as predicted, some geriatrics get up shuffle around. Sad but by the time some of then manage to get to the dance concrete the songs over. Not exactly dirty dancing. A bit like a Deer Valley concert sat in our deer valley approved chairs. No wonder there’s so many vultures circling above. 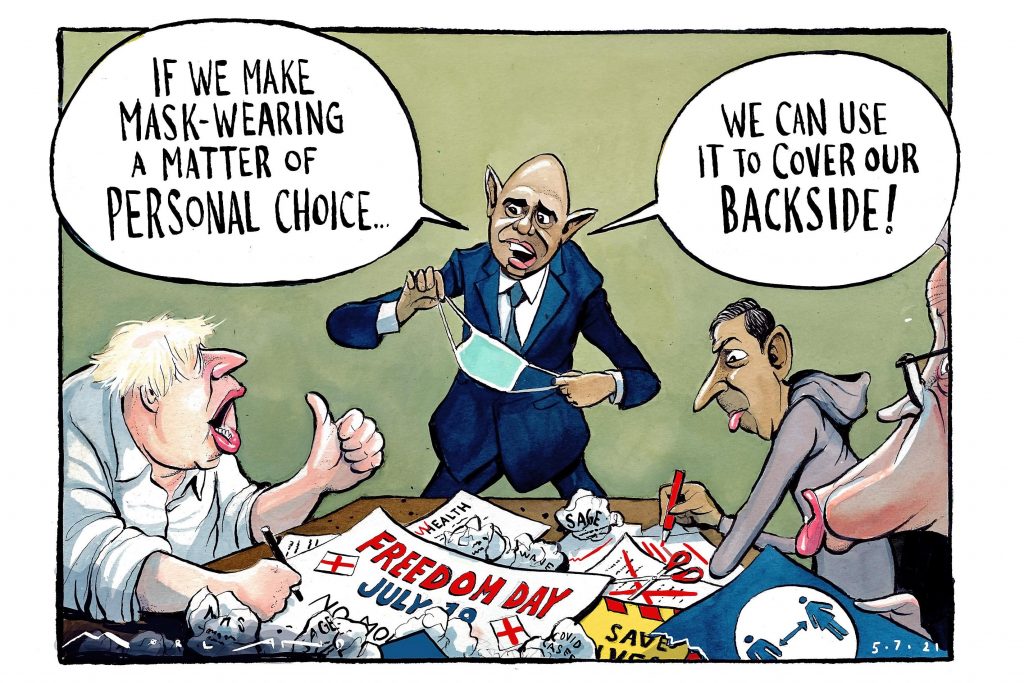 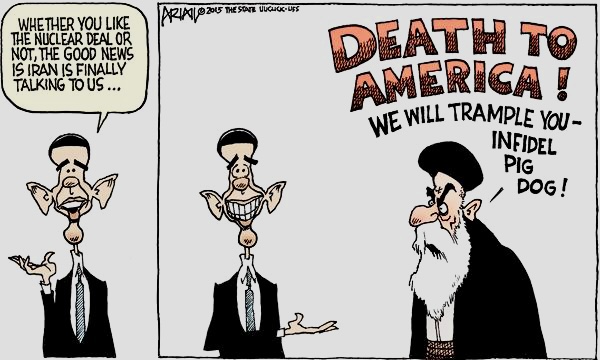 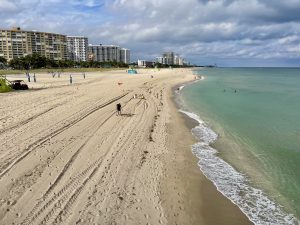 Another glorious hot sunny day. Take an afternoon stroll down to Turtle beach. Sit and watch the Pelicans entertain us. Then a major sin as we go to a bar and have a beer before 17:00. Wendy has a rum and coke and then staggers home – lightweight. 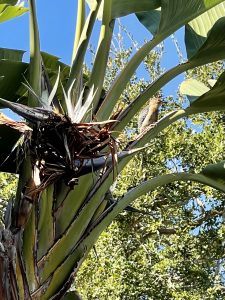 Try to sit out on the deck but it’s just too hot so end up in the shade outside our rental. Then our friendly little red bellied woodpecker comes around and starts chirping away. He’s also very good at catching flies. Try tempting him with his bird call on my iPhone.

Eventually Wendy gives up on watching “The Apprentice” and serves afternoon tea. Her head is still spinning from that drink. 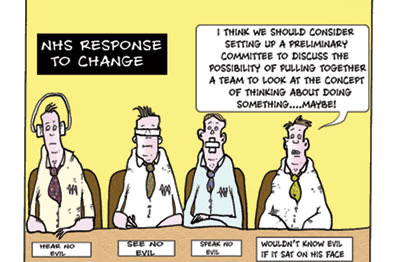 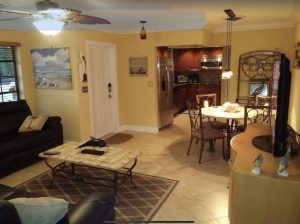 Leaving day. We have to be out by 10:00 or they very arrogantly offer to charge us another full day.

Because I want to avoid the crazy interstates toll roads it’s a five hour drive across florida. 150 mile of nothingness. Just scrubland and cattle, wot no cowboys. Very little signs of habitation and it’s at least a 50 mile walk if you run out of petrol.

Finally arrive after 5 hours and stop off for a dirty Chai at Starbucks before driving down to the nearest Home Depot to order a Wyze Doorbell Pro for Kurt. No chance of ordering it online as the clusterfuck website designers – 10 year olds whose mummy has to tie their shoelaces for them and have no idea that there are other countries outside the USA – can’t accept a UK zip code when trying to purchase online. 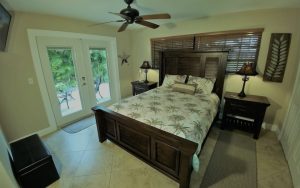 Finally get to our next home in Pompano Beach for a week. Can’t get in before 16:00. It’s all very nice, clean and modern. But what is it about American houses, they’re always so dark, like going into a funeral parlour, and very rarely have a decent central ceiling light.

I unload the car and then it’s the final tribulation of the day with a visit to Publix for tea and supplies. As soon as I’ve ordered my Reubens, which has kept me motivated all day as I salivated over the thought of it, my threshold of tolerance for this purgatory goes. Get me out of here.

When you think of cowboys first thoughts always go to the Wild West, but Florida was also famous for its cowboys and cattle.

The herds ranged in size from 5,000 to 50,000 head. Rustling was prevalent throughout the state. This was because Florida was an open range. There was not a fenced pasture anywhere in the state and cattle roamed freely. The early cowboys would round cows up over miles and miles of open plains, in the hammocks, and by the rivers and streams. Then they would drive them to market.  Florida’s old-time cowboys had a unique way of herding cattle. They used 10- to 12-foot-long whips made of braided leather. Snapping these whips in the air made a loud “crack.” That sound brought stray cattle back into line fast and earned cowboys the nickname of “crackers.” Many rode rugged, rather small horses known as “cracker ponies.”

Cracker cowboys also counted on herd dogs to move cattle along the trail. Their tough dogs could help get a cow out of a marsh or work a hundred steers into a tidy group. For those rough riders of Florida’s first ranges, a good dog, a horse, and whip were all the tools a true cracker needed.  By the 1890s, cow camps were located in most sections of the state. One such camp was located near Lake Kissimmee. It was known as “Cow Town.” The area’s cattle were referred to as scrub cows, ridiculous in appearance. They were once described as “no bigger than donkeys, lacking quality as beef or milk producers.” They were valuable because the animals could survive in wilderness areas. By the 1920s, however, the quality of Florida cattle had improved greatly.  Raising cattle is still one of the biggest businesses in the state. Florida’s ranchers raise the third largest number of cattle of any state east of the Mississippi. Their herds represent many centuries of dreams. They link the sweat and success of ancient Spaniards and hardy pioneers with today’s modern cattle ranchers.

Driving along and just seen a major sign saying “Report impaired drivers”. We assume that includes mentally impaired. Wendy gets the iPhone out and starts snapping away. Within an hour her iPhone has run out of memory. 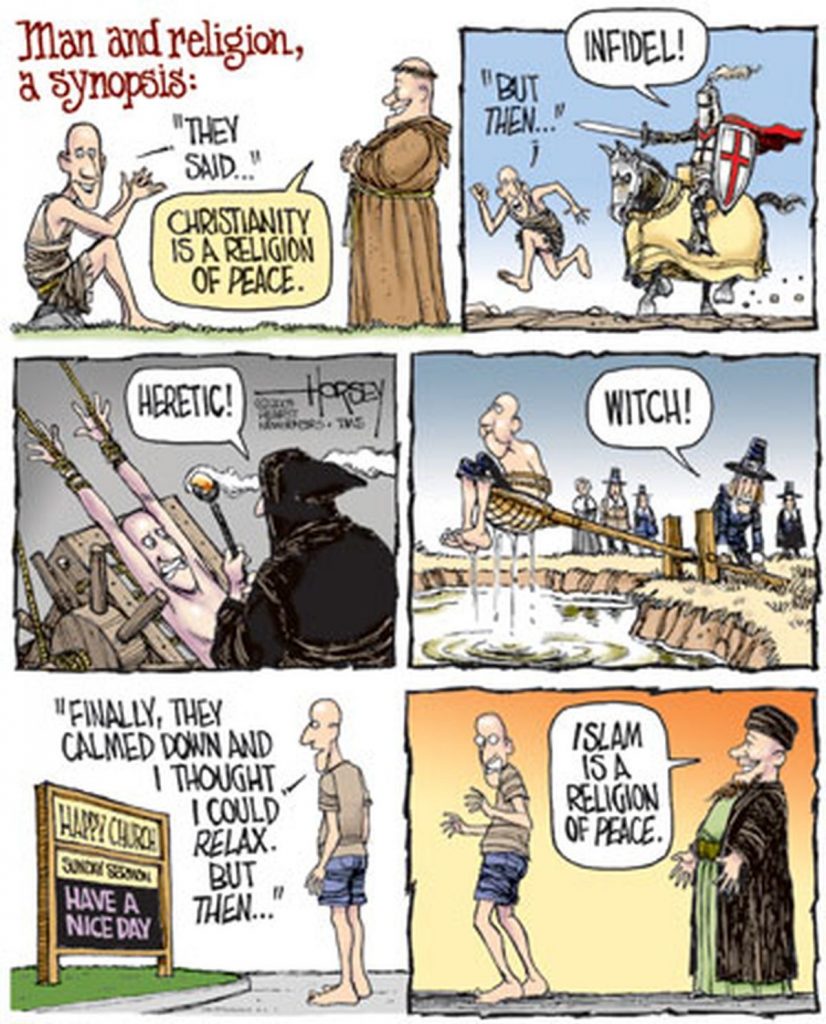 Don’t we just love VRBO and Airbnb for their cleaning services. They charge a kings ransom for cleaning and then expect that prior to leaving you wash the pots; empty the rubbish; strip the beds; pile up the towels and leave the place as clean as you found it. Anything else? Why don’t they just give me a broom and a mop and I’ll stick them up my arse and finish the job. What do the cleaners do for their money? I’m sure they only get a smidgen of the cleaning fee. Just more profit for VRBO and Airbnb.

Lazy do nothing day, just relax. 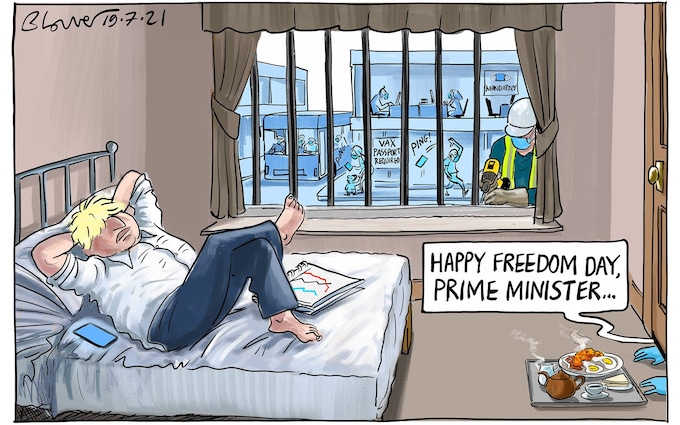 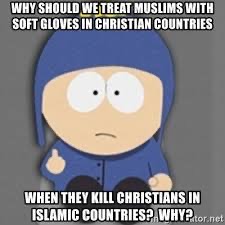 Much to Wendy’s disgust our VRBO lacks a kettle and storage space for your, not that you would expect visitors to a self catering accommodation to have food items to store. Common sense the world over is under threat from the stupidity virus.

Not only do they want copies of our credit card, sans number, but also our driving license or passport.

They also want a contract signing, it actually has no contractual terms, but just wants your passport number and other information useful to any hacker. Bear in mind they’ve already had most of this information sent them, we have already paid in advance, they have a $500 deposit, plus damage insurance. What purpose does all this nonsense serve? I suppose they might be concerned that an imposter turns up to spend a week in our place!

Then when I turn my Smart DNS on I find that they have a Cisco router in place that block access.

Who are these people? Pettifogging individuals with a severe obsessive compulsive disorder.

Wendy and I have a guessing game as to occupation. Both simultaneously come up with number one occupation being Quality Control. Second is health and Safety.

A lot of visitors around here seem obsessed with the fear of alligators. Here’s a few facts about them.

Once a week is a typical feeding schedule for alligators living in the wild. Excess calories are stored in fat deposits at the base of the alligator’s tail. Incredibly, by burning fat reserves, it is possible for an alligator to last more than two years between feedings.

Alligators primarily eat their prey at dusk or during the nighttime. An alligator’s diet consists mostly on what is available to them as they aren’t known to travel far for a meal.

After death the beasts will either take the carcass into the water and consume it or store it in an underwater den. They eat by biting and do not swallow the prey in its entirety.

What do alligators eat? Alligators primarily hunt at dusk or during the night. They lie motionless in wait for prey. Their prey selection seems to be determined primarily by size.

While still carnivorous, small alligators will often feed on their favorite food, Florida gar, as well as small snails or other crustaceans. The more the alligator grows, the bigger food source it will need. Some of these foods include fish, raccoons, birds, and even other alligators!

Humans are not an alligator’s natural prey. In fact, alligators are inclined to be afraid of 10 minutes humans. However, feeding alligators causes them to lose their natural fear of humans.

Don’t bother running from an alligator they can reach speeds of 30MPH.

They’re not bad to eat either, with popular gator tails. 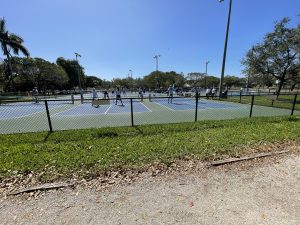 Then we’re off down to Hugh Taylor Birch State Park. Another $6 saved it’s only 8 miles away but takes 35 minutes with all traffic lights. Can you believe it one every 100 yards in places. 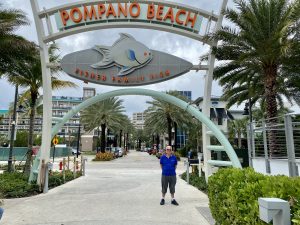 Wendy has her sandwich lunch at the park. We take a stroll across to the Fort Lauderdale beach and then have an amble around the Hammock trail. Take a drive around the park and a stroll down the coastal waterway, wow it’s rough today.

Tortoises here are protected species and they ask you to drive slow to avoid that crunching sound as you go over one. There’s one speeding down the side of the road with a park ranger escorting it for safety, probably to stop the exits picking it up or taking it home. How neat is that. 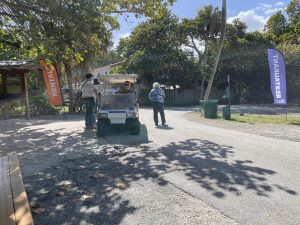 Ever wonder why America has a serious obesity problem? Well this free ride to save a 5 minute walk may help answer that.

Then it’s an aborted visit to Wholefoods, apart from getting some Sumo oranges and Ethiopian coffee, followed by a visit to Publix. Two supermarkets in one day is just two too many. A real trial of my threshold of tolerance.

Back home to afternoon tea on our patio.

Momentous joy, Wendy has fallen out with Wholefoods. For the second time she couldn’t get the vitals we needed. She’s promised no more visits to whole paypacket this trip. Result. Praise be to the Flying Spaghetti Monster. 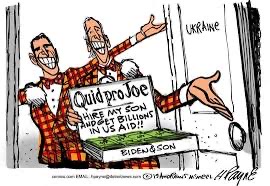 Take me to the church
This entry was posted in Uncategorized. Bookmark the permalink.