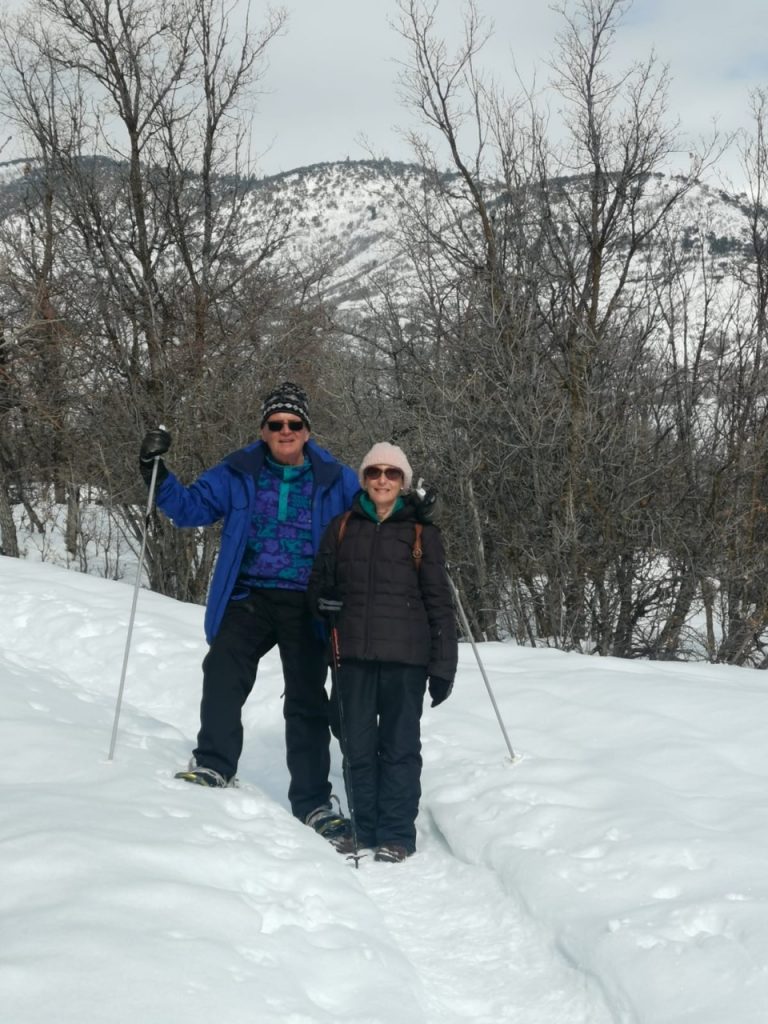 Up and out early to go snowshoeing with Joe and Donna. We go up Robs trail, about 1,200 feet elevation and about 4 miles. Use the Yak Tracks instead of snow shoes. 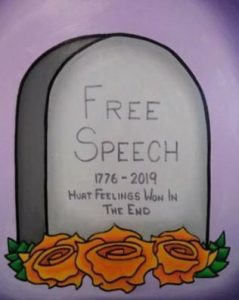 So true. We need a 1st Amendment.

First halve is a rapid ascent in Donna’s wake then take it easy in the rear with Joe. Despite it being all uphill I don’t even break a sweat, colder than a brass toilet seat in the Yukon. The Yak Tracks just about make it.

Bob picks up Anna and Leon to go skiing with them for the morning.

In the evening Hal, Carol and Angela come round for dinner. 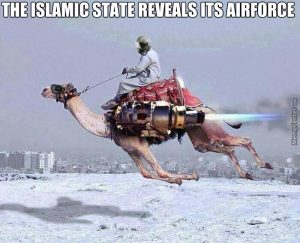 In the afternoon we have to go to the bank to change our PIN’s on our debit cards. It seems that in this advanced colonial civilisation you can’t do it at an ATM. Can’t be done by a teller, needs the expert services of a banker. Teller tells me we’ll have to wait because the bankers busy at the moment, at which point I point out that “…well he’s sat around doing nothing, make him aware there’s a CUSTOMER waiting”. We get served promptly – just needs a bit of focus on “customer service”.

The anti-American dream by Pat Connell.

The quickest way to create a captive society is to educate children to hate their own freedom.
Nobody’s feelings were consulted during the making of this video. Anyone who has a problem with that can drop dead. 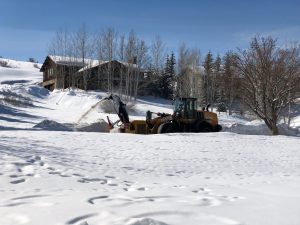 Just clearing up some more snow.

Anna and Leon set off for a days skiing with Carol and Angela.

We have a lazy morning. Then I walk up to the CC with Wendy – she’s volunteering there for the afternoon. That’s my exercise for the day.

Finally manage to display the glyphicons and control the column width in my CRUD web site I’m writing. It’s taken hours to identify which elements of Bootstrap are causing the problem and which CSS classes work. Nerdy stuff but so much more fun than crosswords or sudoko.

Then it’s off to the gun club for some target practice with Joe. Use a 9mm 1911 Springfield. A joy to shoot. The only disadvantage is the sights are black so on a black target it’s not so good but on a light target it’s amazing. Moral of that is to only ever use it to shoot white men. 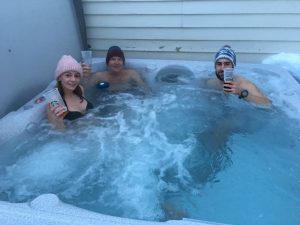 Drinks in the hot tub.

Jamie comes round to collect the table that Janelle’s getting rid of.

In the evening Anna and Leon take us out to dinner. Go to the Blind Dog for sushi. Getting in training for our Japanese trip. Leave the choice of the myriad of options to Anna. Raw fish, pretty tasty. Mind you it gives me the squitters, although there is some blue crab in there so perhaps that’s the cause. Need to experiment ready for Japan. Great meal, the Cline Zinfandel was awesome and great company. Yet another fantastic evening here in paradise.

Farage asks who the damp rag is: 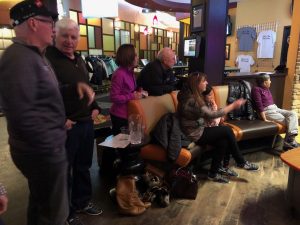 Lunch time Wendy goes to help out at the CC. I walk down the trail from Peaks hotel to Starbucks at Kimble. Exactly 5 miles and pretty exhausting in the snow without YakTraks. Catch electric express back up to meet Wendy at the CC and for a lift home. A good 6 mile walk.

In the evening it’s poring down with snow. Pick B&M up and head off down to the PCMSC AGM at the golf club. Cowboy evening theme with a meal. Pretty good evening but pass on the line dancing.

Wendy’s having kittens about the snow so we leave pretty early to avoid getting too snowed in. 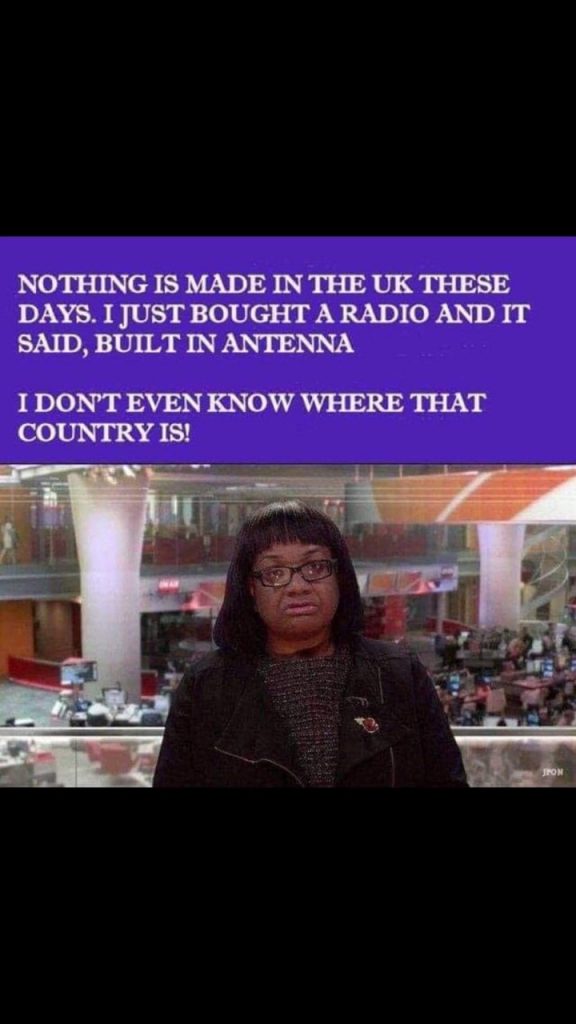 Probably lost on our colonial friends but this opposition (extreme leftwing) home secretary has a reputation for being a complete dick, with worst numeracy skills than that of a talking horse.

Next time you hear someone slagging off our superb National Health Service refer them to this “Mirror Mirror” survey – yes we come out top amongst the developed nations, despite spending substantially less. For my colonial friends it really isn’t a communist inspired plot but more like a fundamental human right. Read it to find out how the USA fares in World ranking. 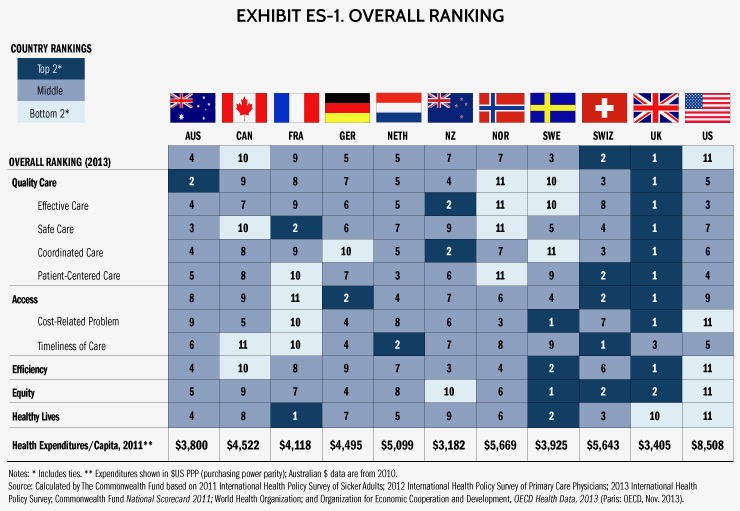 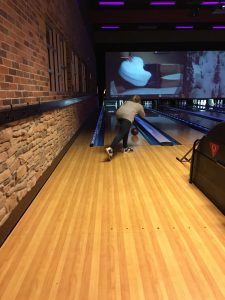 Pick up Helen and we go bowling with the other geriatrics from the Newcomers. A good morning and even a respectable score. Then it’s Starbucks.

Afternoon is the CC for Wendy whilstI get in a couple of hours Pickleball at the Basin Rec. It’s awesome. Win 4 out of 6 games.

In the evening we’re all off down to B&M’s for dinner. Ravioli with Bobs awesome tomato sauce and Italian sausage (Wendy needs to add these to her shopping list). Not forgetting wine, whisky, espresso and good company.

Vikings, a mythogy of peace:

Sadly Syeten has been closed down by the snowflaky do gooders and PC brigade. More infringement of free speech. We need a 1st amendment. What a subtle way of describing the religion of pieces and permanent offence. 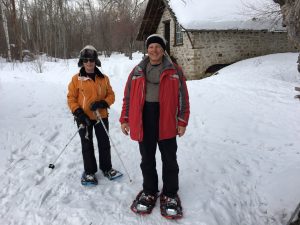 Afternoon we take B&M down to Wassatch State Park to christens Bobs new snow shoes. Do the Huber trail. To be fair we could have walked or YakTraked it but it was B&M’s first outing so we did it for fun – even Wendy snowshoed.

Then seek out a coffee followed by a trip to the sportmens warehouse and that good old all time Saturday afternoon favourite Walmart – you know the place where the crazy people go.

The evening’s our first quiet evening in for over a week.

Well it’s somewhat consoling to know that it’s not just us Brits suffering with all this. Why you can’t argue with a leftist: 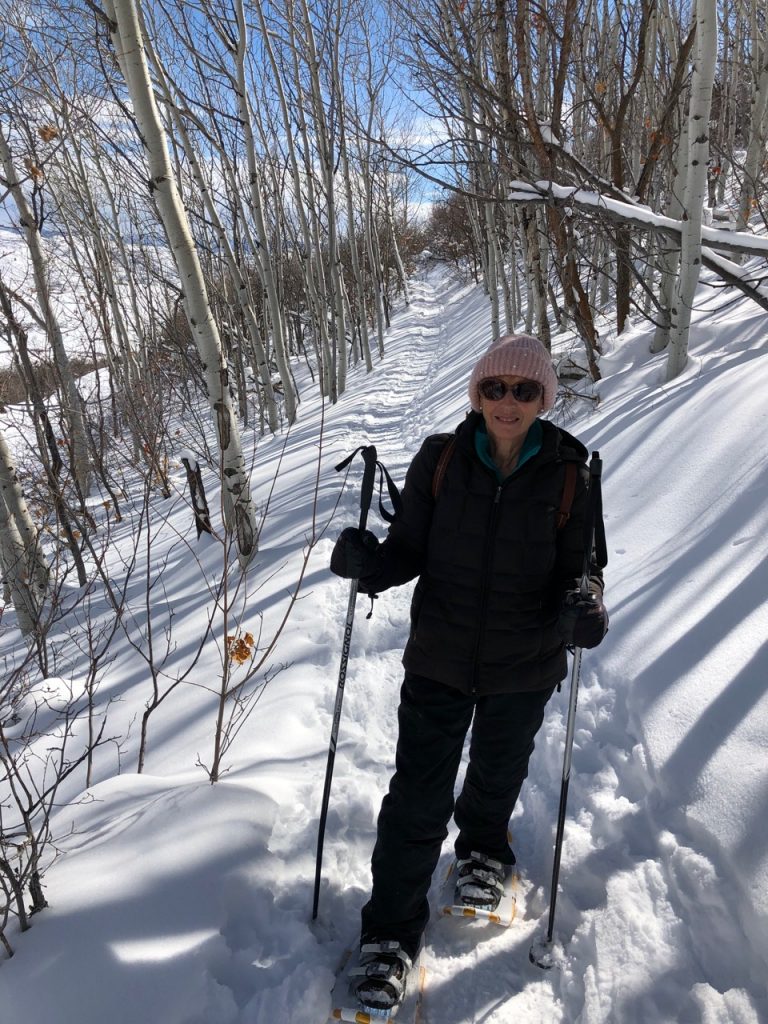 Start of the Bear hike.

Lazy start. Then off snowshoeing up to the Bear Hike, aka Snow Top. The usual root round was 3 foot deep snow and no idea where the trail was so we went clockwise, out and back. Better in the snowshoes, only took us about 50 minutes.

Then in the afternoon we picked B&M up and went to the apres ski. Not many there, a quiet do. Remembered to take our own food back!

Quiet night in. Finished off the wine with a spot of sushi and a great alcoholic ginger beer. 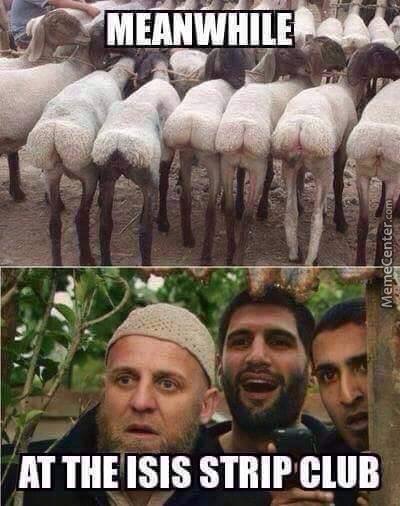 Don’t we just love American roundabouts! They really are more dangerous than trying to sell a bible in downtown Tehran. Why do the colonials not understand them. For us geriatrics, who have the memory of a goldfish, it’s so much easier than remembering who was 1st, 2nd and 3rd at a 4 way Stop sign. 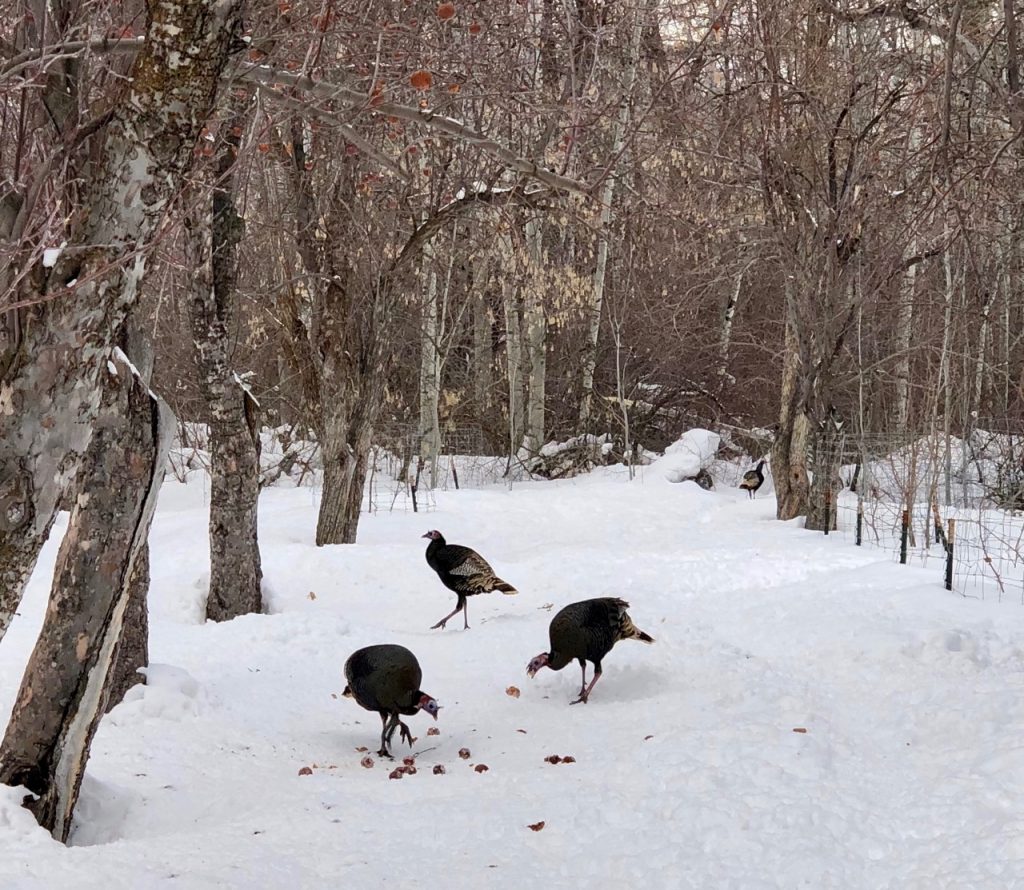 Wild turkeys. I wish I had my bow.

Lazy morning again. Recovered Kurt’s wedding photos from Google Plus before they got deleted and started work on a revised photo gallery web page.

Dropped Wendy off to have her nails done, then she was having lunch and shopping with M. More “want” less “need”.

I went to the gym and then played nearly two hours pickle ball. It’s awesome, just wish I could play better.

Then it’s a quiet night in watch Netflix series with French subtitles.

What is it with some of the women who play pickle ball? Wow. Bossy and nasty. Such a fun combo. Certainly wouldn’t fancy waking up with some of them on my pillow. Seems to bring out the worst of colonial matriarchs. For the Sake of the Flying Spaghetti Monster it’s only a game 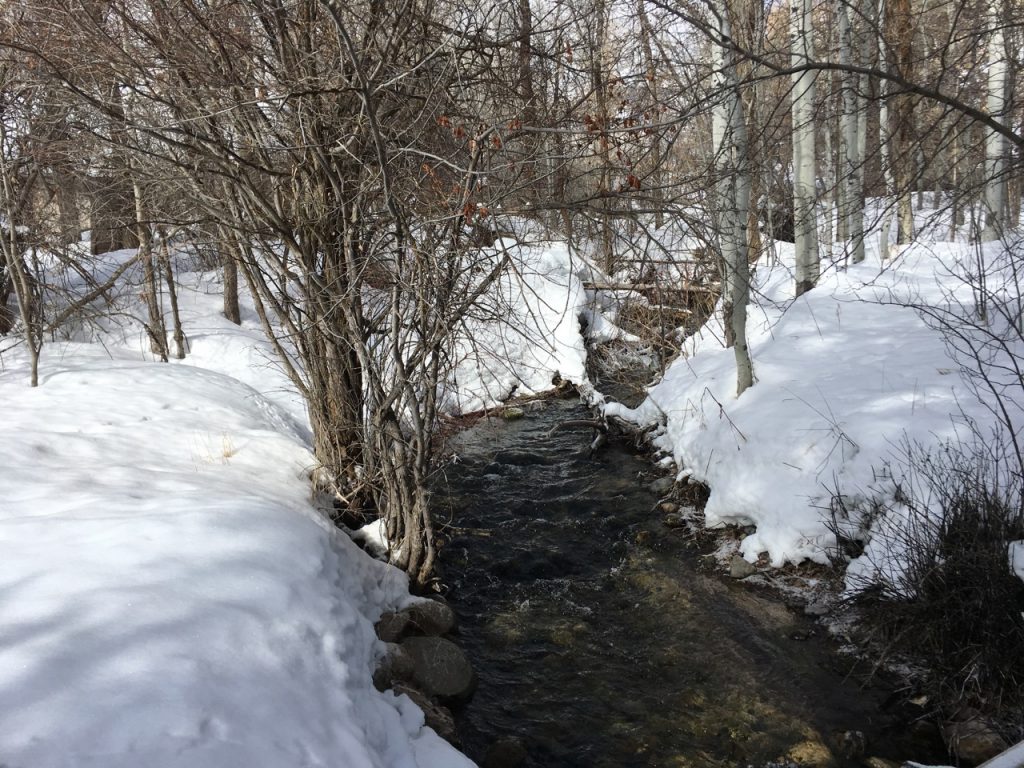 Lazy start. Then I set of for a 3 mile walk in the snow whilst Wendy does the shopping. I’m Hotter than a road lizard walking up a hill backwards carrying a bucket of slobber. Perhaps I really don’t need my ski pants, fleece, wooly hat and anorak on – it’s too warm, cruelty to snow.

Meet Wendy back at the supermarket. A bottle of Bourye just screams out “Please buy me” from the liquor store shelves. Temptation to buy this limited edition, 96 point score Bourbon, is just too great.

Then in the afternoon I go down to Salt Lake archery with Joe. No one else from PCMSC is interested.

In the evening B&M and Mike come round for dinner and drinks of course. Sample some of the Bourye – it is truly awesome.

Just love this true geriatric story. How do I know it’s true, well it came from a friend who shall remain nameless.

He went to see Bohemian Rhapsody and was raving about how good it was. The lady he went with then pointed out that he’d gone with her 2 months prior to see the exact same film, had fell asleep before it even started and had no memory of the prior visit. Jut one of the many benefits of old age, but looking on the positive side it’s so much better than the alternatives.

Fortunately scientific research has come up with an answer to what best factor determines longevity. It seems that people with more birthdays live longer.

Here we are with the colonials in the land of free market economy and enterprise. Enterprise, that’s a word that like anyone aged under 21, not allowed in a state liquor store. 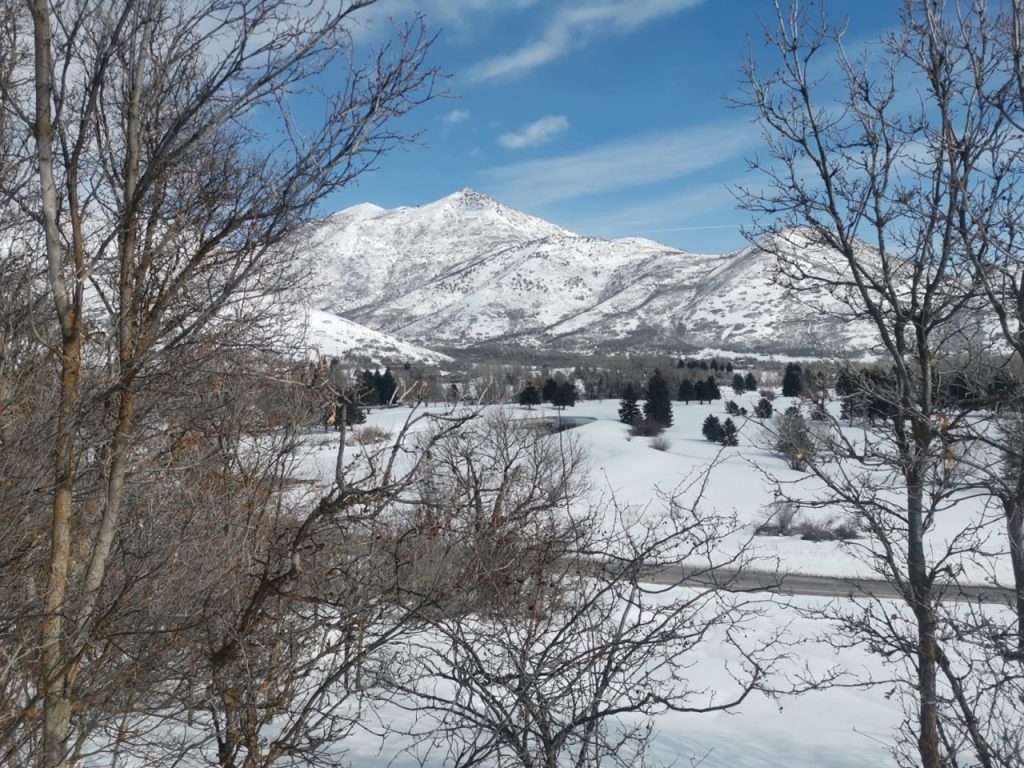 Wendy to sales staff: “Do you have any alcoholic ginger beer anywhere?”.

Sales (well lets be more realistic and call her a clerk): “No we’ve none in at the moment. As soon as we put any on the shelves it just flies off the shelves”.

Unlike me Wendy didn’t say what I would have said: “Well why don’t you buy more, that way you would sell more? It’s called stock control and enterprise.”

In fact if you wanted to be a real smart arse you could even sell them a formula:

Not exactly rocket science, especially with modern computer stock systems. This country really does seem like a shrine to lost opportunity cost. No one stocks anything anymore. 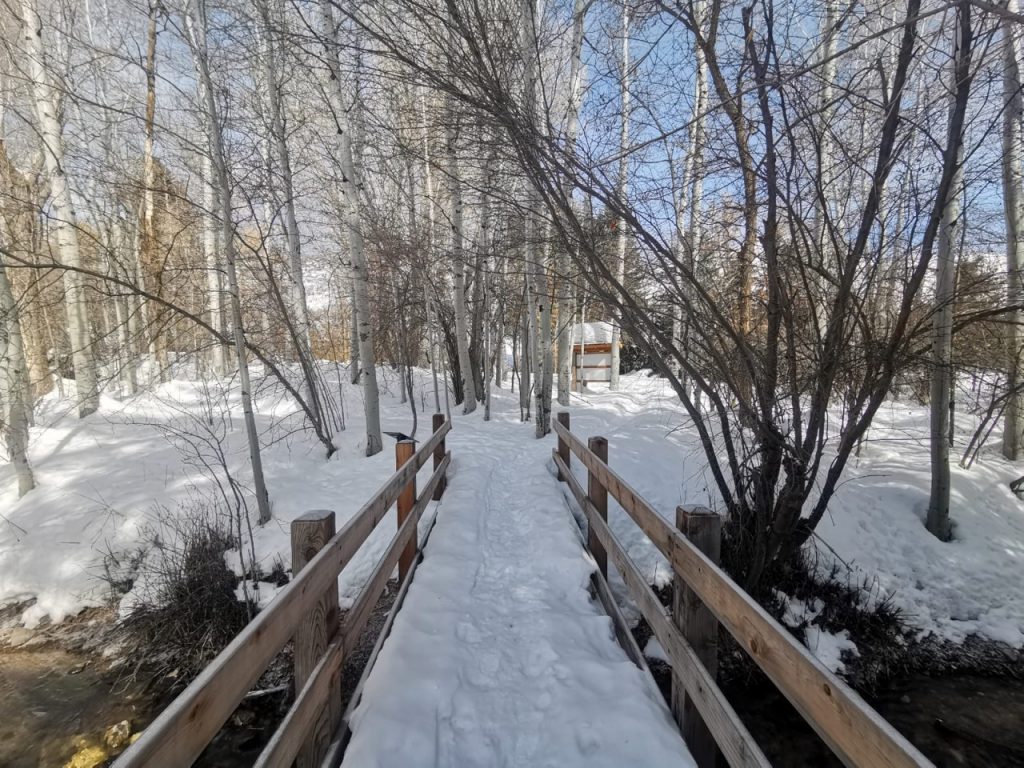 Then it’s a 3 mile walk into town and back. Wendy goes to the CC.

Afternoon is shooting with Joe. Try an assortment of weapons including a rather “Make my day” style revolver. I think its the worst performance since I’ve been here. Must say the Springfield 1911 never lets me down.

A quiet night in for a change. 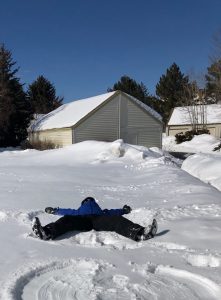 Tony does a snow angel.

Don’t you just love the annual car insurance renewal charade where the shisters treat you like an imbecile and try to rip you off. This year Aviva have excelled themselves. A 10% price hike on a dual car policy. The exact amount of 10% says it all. But then you find that if you insure each car individually with them it’s about £150 cheaper than the supposed benefit of dual car. They really do have no respect for their customers. 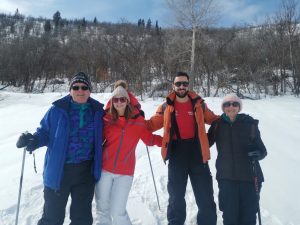 In Arabic, “Islam” means submission and “Sharia” literally means “path” or the path to salvation. Sharia, a set of guiding moral principles derived from the teachings of the Prophet Mohammed is inseparable from the practice of Islam. There are many tenants of Sharia law but here are a few to ponder:
• Muslims should engage in Taqiyya (Lying to advance Islam). Lying to non-Muslims is encouraged by Muhammad
• Men are allowed to practice polygamy and to be married to four wives at the same time; women can only be married to one man
• Muhammad instructs female genital mutilation; girls clitoris is cut out so they cannot ever enjoy sex
• A man can beat his wife for insubordination
• A Muslim who becomes a non-Muslim is punishable by death
• Muslim men have sexual rights to any girl or woman not wearing the hijab (Head Covering)
• A woman or girl that has been raped cannot testify in court against her rapist.
• Testimonies of 4 male witnesses are required to prove rape of a female
• A woman’s testimony in court, allowed in property cases, carries ½ the weight of a man’s.
• A man can unilaterally divorce his wife; a wife needs her husband’s consent to divorce.
• A man can marry an infant girl and consummate the marriage when she is 9 years old.
• Criticizing Muhammad, Allah or any part of the Quran is punishable by death.
• Homosexuality is punishable up to death