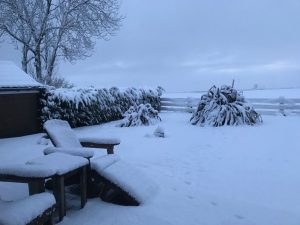 Goodbye Belthorn for two months. You can rain and snow to your hearts content.

Off to Paradise (Park City) yet again. Stayed overnight at the Crown Plaza, Manchester airport as snow could have been a problem. Somehow it’s so much more relaxing staying in a hotel the night before.

Manchester airport was it’s usual nightmare. Had to wait an hour before we could get in the lounge. Of all the lounges, in all the World this one is always full and they never do anything about it – taking money under false pretences. 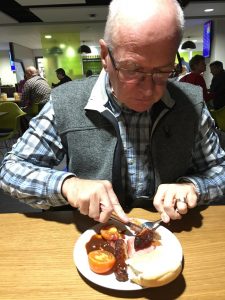 Breakfast, when we finally get in the lounge.

Virgin flight to Atlanta was on time and very comfortable. Premium economy is worth it. Especially if you don’t like their wine they nip into upper class and provide you with a quality St Emillion. Atlanta was fairly efficient. They’ve got rid of all those crazy passport reading machines and have gone back to good old ways. Passengers are happy and immigration officials are happy.

Hertz at Salt Lake were a nightmare. Instead of the usual choice of superb free upgrades there was only one 4 wheel drive SUV, which they were reluctant to let me have because we’re renting for 2 months. You’d think they’d be only too pleased to look after such a bulk buyer. Anyway after much discussion with the manager he saw the error of his ways and let us have a free upgrade to a Kia Sorrento. I think I managed to grind him down and appeal to his managerial prowess. Sadly we have to raise and close the boot manually – how will I ever get a green card without a button to do this for me? Then to top it all Wendy starts bleating because there’s no heated seats. 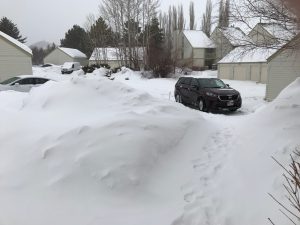 3 foot of snow all around. Best we’ve ever seen it.

As usual up at the crack of sparrows. Wow we have 3 foot of snow all around us.

Breakfast at Squatters as usual. The 10 year old girl serving us manages to screw the order up 3 times.

First off up to the mountain to view the slopes and the skiing (look only, don’t ski), then coffee shopping followed by the all important trip to the off license (liquor store for you colonials) for wine and can’t resist a bottle of High West Yipee Kayee.

It’s unpack and shopping today. For me there’s no skiing this year.

Good to be back. 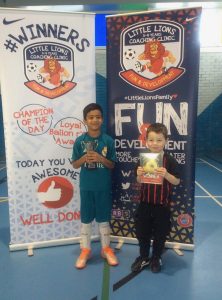 I know it’s nothing to do with PC, but couldn’t resist this. Just before we left I braved taking Jasper to football and he won the award. He was so proud.

As always I watched the State of the Union speech – wish we had one in the UK, although would be pretty terrifying at the moment. The YouTube version had a few times when it just cut out, with a black screen, as if it had lost the signal. One of the cut outs occurred in the bit where Trump said “….America will” black screen cutout ” be socialist”. I couldn’t believe my ears, so rewound and played it again, but still got “….America will be socialist….”. OMG what’s happened to the USA, have they caught the European virus. Still not believing my ears went to another youtube version and pleased to see sanity still rules “….America will NEVER be socialist….”.

The other good news is despite jet lag and a bottle of red I managed to stay awake through it. 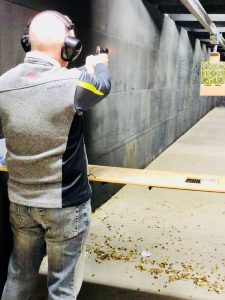 Back to the gun range.

Plenty more snow. The Christian centres even closed so Wendy’s got nothing to do.

Enjoying writing some CRUD software and learning a new programming language – nerd. It’s taking over all my spare time, I’m really engrossed so I’m afraid it’s a minimal blog this week, but next week I’ll be back with a vengeance complete with Rants (BREXIT offers plenty of scope), Sick Humour and of course Religious Commentary (the Jihadis are just prime for poking fun at).

Afternoon it’s the gun range with Joe. I hire my favourite gun the 9mm Wilson Combat, but have to say I prefer Joes 9mm. Despite practice with my Sig Sauer air pistol back home I have to say I’m not too hot a shot. 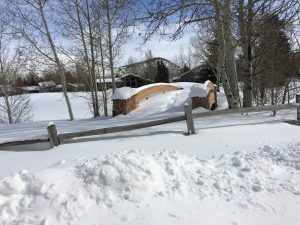 View from our back deck.

Plenty more snow and it’s colder than a witch’s teat in a brass bra.

As usual off down to Costco for supplies. After 10 minutes I’ve explored the store and am bored. Call in at archery to see how much it is.

Then in the evening we’re off round to Bob and Marilyn’s for dinner. It’s Mexican, one of my favourites so saved me a trip to Chubascos.
Good to see them and they’re pleased we’re back. They’ve got my bottle of High West Midwinters Dream, it’s awesome. Plan our events together for the coming weeks. 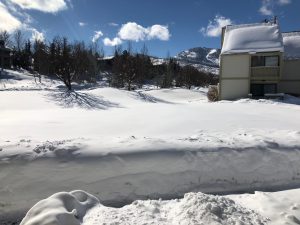 Ten pin bowling in the morning with the usual old foggies from the Newcomers club. Great fun but makes you realise you’re getting old. Really annoying when you have the mind of a 16 year old.

Wendy’s back at the Christian Centre in the afternoon.

In the afternoon I take a long walk in the snow to the Christian Centre. For the fun of it there and back, to see how far it is.

Friday night Barbara and Steve take us down to the TGIF at the Golf Club. Meet up with B&M and good to see Helen & George again. Then it’s dinner at a table of about 20 friends and acquaintances from PCMSC. 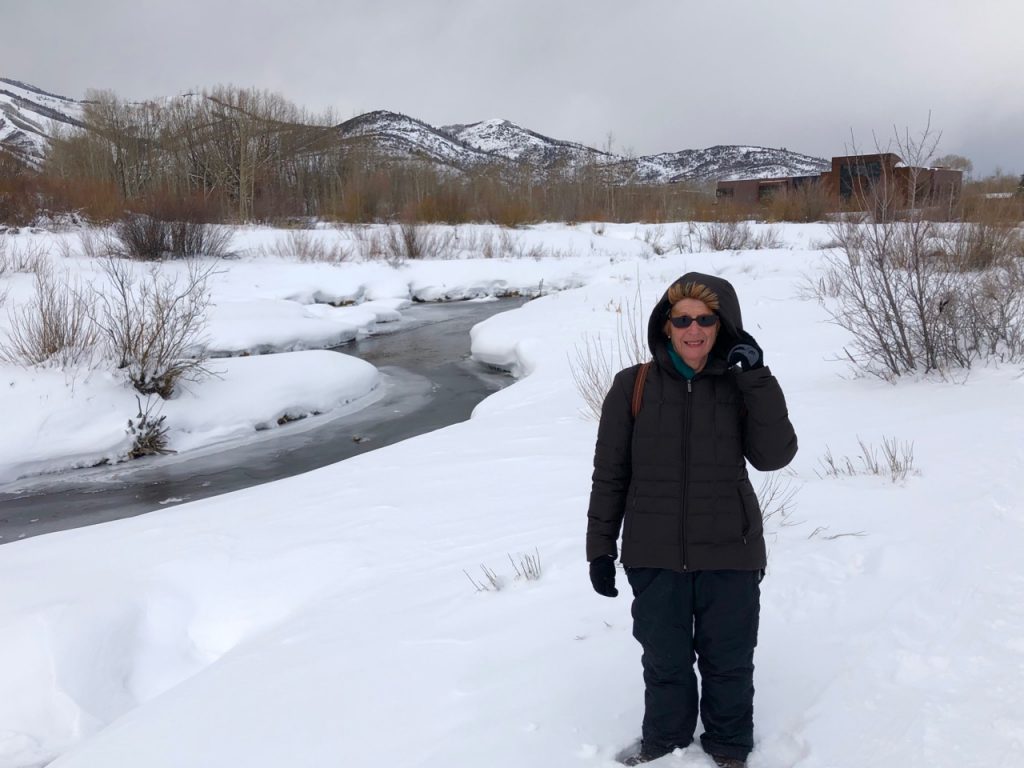 Cold and plenty of snow. We catch the bus to the Peaks hotel and plan on walking all the way down to Kimble Junction. 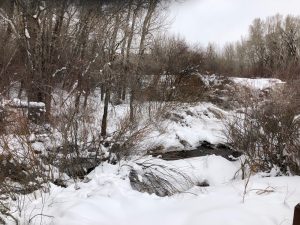 None of these trails have been cleared so it’s hard going on loose snow. Wendy’s slower than molasses on a cold day. Get as far as Willow Creek and we catch the bus the rest of the way.

Starbucks and then Tangier outlets.

Quiet evening in and as usual early to bed. 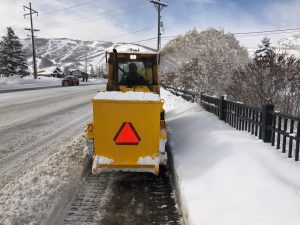 How’s this for your own personal snowplow.

Up at the crack of sparrows again. Sleeping is still a nightmare. It’s not insomnia, it’s just a screwed up sleep pattern. No doubt we’ll just get into a routine and we’ll be headed home again – perhaps we should just stay here.

Nip to Tangier outlets for a new pair of snow boots. My 14 year old ones have finally started letting water in. These new boots are awesome, half the price of Sorel, half the weight and oh so warm and comfy. 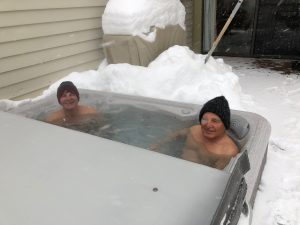 Bob and I brave the jacuzzi.

Nearly had to call out the avalanche search and rescue team. If I’d have been a second earlier I would have been buried under an avalanche of snow that cascaded off the roof of the school we were walking past. That would have looked good, another insurance claim.

Have a stroll around to remind me of the good old days when I used to ski.

Afternoon we get an awesome snow storm.

Evening B&M come round for dinner and Jacuzzi. 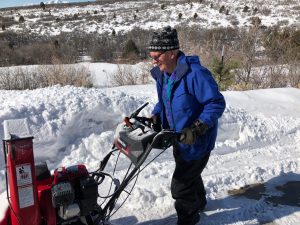 I want one of these for when we have an inch of snow in Belthorn.

Another gorgeous sunny but very cold day here in paradise.

Drove over to Hals to pick up snowshoes and go snowshoeing with him. Even with snowshoes on I’m sinking 3 feet. It’s exhausting, feels like I’ve been rode hard and hung up dry.

Lazy night in for a change. Even manage to stay up until 22:00. Both deserve 4 gold stars. At least my nerdy programming project manages to keep me awake. 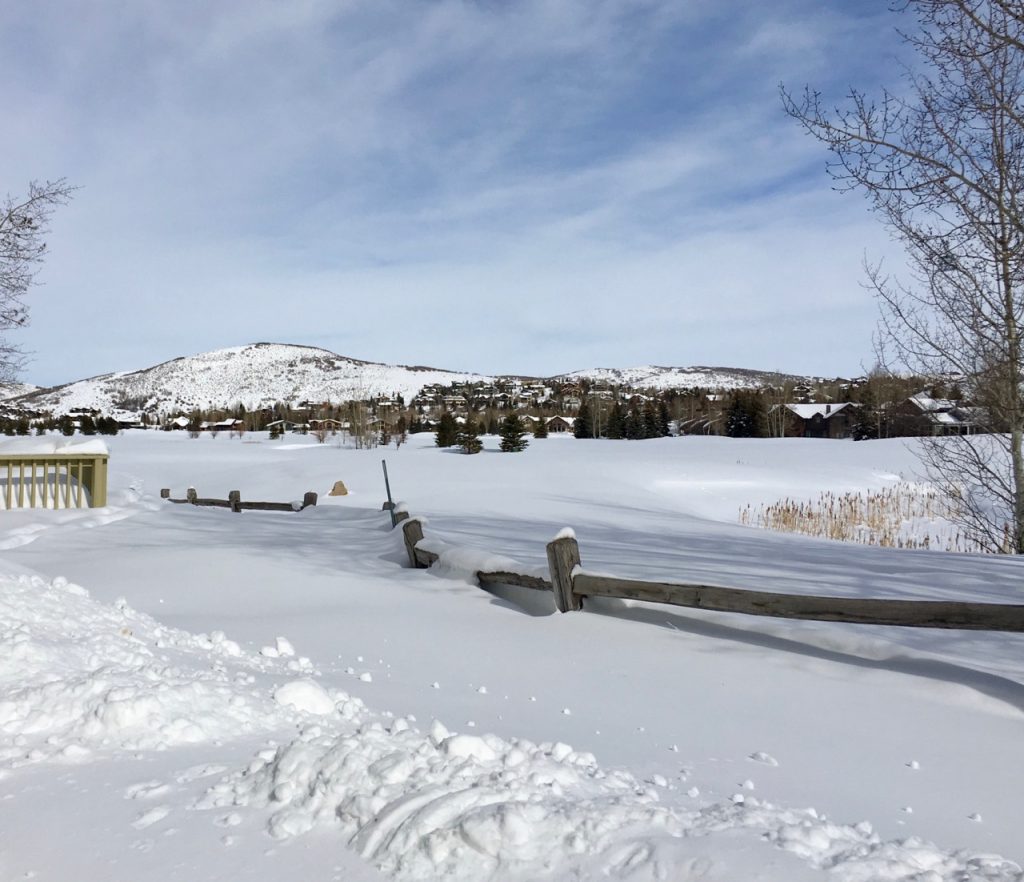 Just being up in the mountains pottering around is so awesome. Yes, I’m not skiing this year – BooHoo, life sucks get over it. I’ve had 52 great years skiing, time to move on. So it’s snowshoeing for me this year – mind you with my luck I’ll probably get knocked over by a stray scumboarder. It’s really awesome. Cannot think of a better way of spending the day, even if it’s cold and a raging snow storm. But almost equally awesome is going for a walk down in the town when you’ve a foot of fresh snow on the ground, or driving around in a 4 wheel SUV when the roads have been mostly cleared but there’s till a lot of snow around is another treat.

Snow, like sunshine, truly makes the world a better place, and here we get both.

Good to be alive with enough money to enjoy life. You really don’t need a fortune. And as Bob would say “Wonder what the poor folk are doing”? 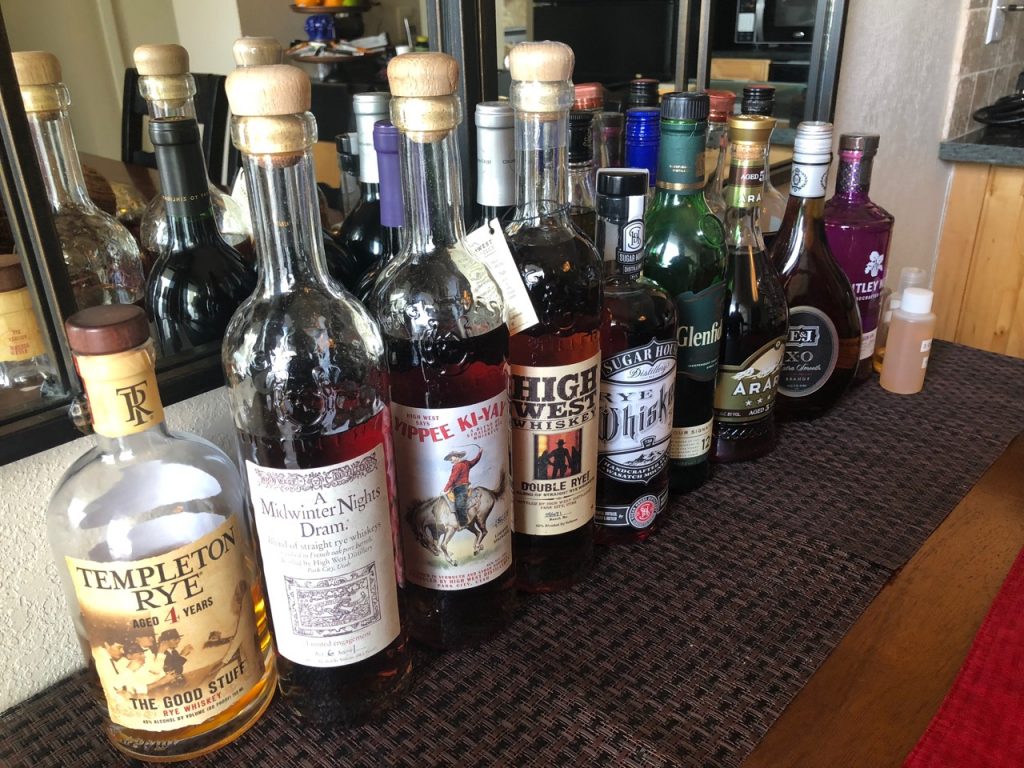