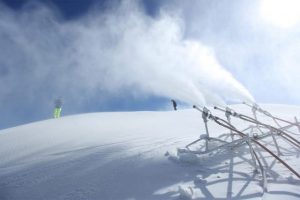 Working hard making snow. They run all day and produce a small molehill. Then nature comes along and snows for a hour and you have a 10″ powder day – well at least in the good years.

Given up on reporting the weather every day. You’ll all just have to imagine how freaky it is. I’ll let you know if there’s anything worth reporting, such as 6 foot of fresh snow.

Yeah, 3″ of snow overnight. It’s my first day to lead the leisure ski group, easy runs, no pressure and of course a stop for coffee. Have a group of 5 and we do a mixture of blues and greens. The fresh snow makes it best days skiing so far for me. Makes all the difference. Perhaps we could order 3″ every night from Amazon.

Wendy’s volunteering at the hospital, so it’s a quiet afternoon for me, get some French studying in.

Lazy evening catching up on “Peaky Blinders” what a great series, so glad we persevered. 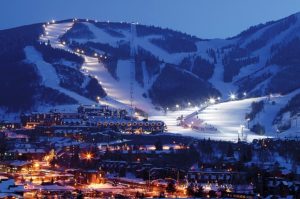 Get out on the slopes for about 10:00 and have a leisurely morning skiing by myself. It’s still a mind game getting over my track record on breakages, so it’s quite relaxing to ski on my own along with some music. If I ski with friends then I either hold them back or I feel pressured into doing runs I’m not happy with. Think it’ll take a few weeks to get my head back together.

Walk round to the Christian centre to pick Wendy up and then we walk home in brilliant sunshine.

In the evening Hal and Carol come round for dinner. Hal’s looking good, being a ski instructor obviously agrees with him. 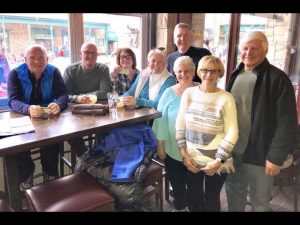 Quiz winners. Mind you not surprising given the team size.

Then it’s off to the quiz with friends. Sadly questions are very US biased – now there’s a surprise – well at least that’s our excuse. Can you believe we actually win – more hats and Starbucks cards. Pity about the beer in Legends bar, try both the Amber and the lager. You can tell how bad it is, pinckle water, I think I’ll drink tap water next week. 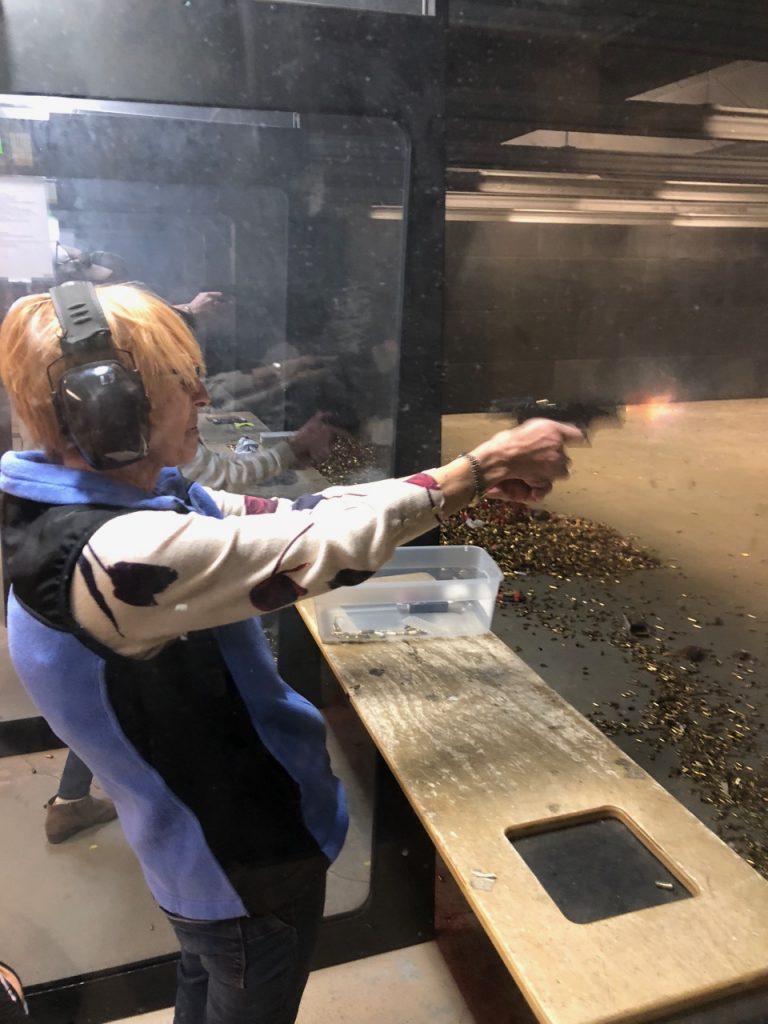 That’s my girl. Who know’s perhaps she’ll get a NRA subscription for her next birthday!

Busy day need a social secretary. Bowling in the morning while Wendy has her supermarket fix. 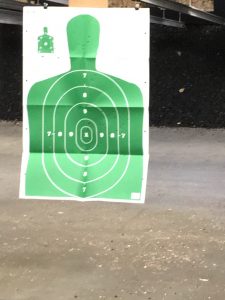 Didn’t she do well. Don’t mess with her when she has a gun in her hands.

Then in the afternoon it’s shooting at the gun club with Bob and Marilyn and, wait for this, Wendy. Yes, Wendy gets her gun. Rent a .22. She does great once she’s got over the noise and the shock. I have a go with Bobs revolver, wow that’s got a kick.

Get a 30 day pass for the gun club, it’s good fun and something you can’t do in the Uk – I have to settle for my Sig Sauer P320 air pistol. No I will not be joining the NRA.

Then in the evening we’re off with Bob and Marilyn to a wine tasting with the Newcomers club down at Midway. A selection of 11 Spanish wines to try, along with punch and some great appetisers. The Spanish wines, in the $10 to 20 range, were quite pleasant, not the usual Spanish rot gut.

Pat Condell – Come On, Ireland. Yes, another reason why we need to escape the EU: 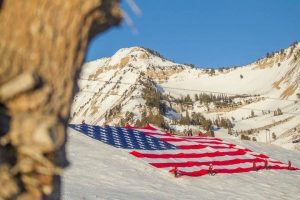 Don’t we just love the Americans pride in their flag. Our snowflakes and PC bed wetters could learn a lot.

Took the day off skiing. Saturdays are getting too busy so won some browny points by going for a walk into town with Wendy. Then more excitement as we catch the electric bus down to Kimble junction. Pick up some targets at Walmart. Wow it’s snowing. Just great going for a walk in the snow. Bring it on. 10 foot would be great, not that I’m greedy.

Turns out we only get an inch of snow.

Bob and Marilyn come round for drinks and dinner in the evening. Melt in your mouth beef, but I notice that Wendy sneaked in vegetable and it’s not even Sunday – dodgy. 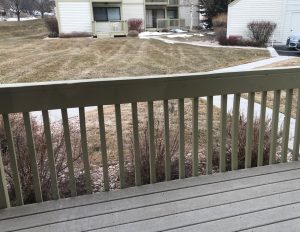 Lazy mornings skiing for me.

Then in the afternoon we go to an Apres ski party with PCMSC. Good fun, chatted with a lot of people, new and old friends. The only down side is I end up committing a grave sin of drinking, usually a full bottle of wine, before 17:00. Then of course I nod off through TV in the evening, but today I set a new record as I manage to stay awake until 23:00. 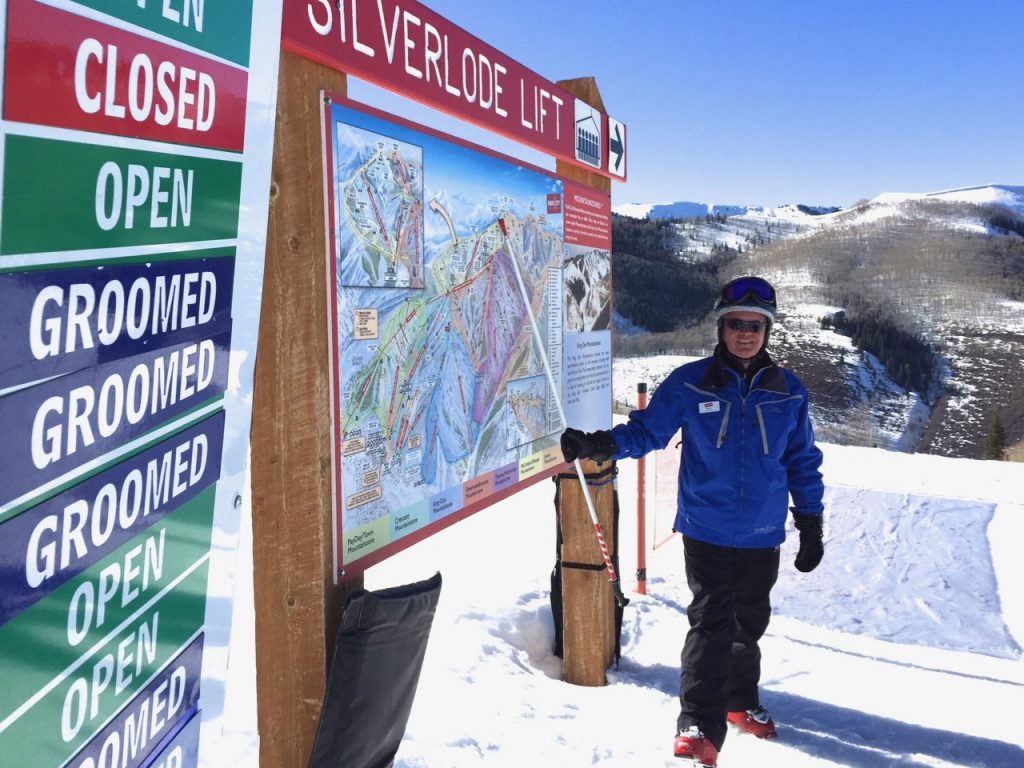 Happy days. And snow was in short supply that year too.
Sundays lessons are taken from Psalm 147, Verses16-17.
Meanwhile prayers for more snow are being offered up to Chione and the Flying Spaghetti Monster – covering all bases.

Still walking upright without crutches. Still skiing. Still having an awesome time in the mountains and mind blowing scenery, despite the lack of snow. Still enjoying catching up with old friends. Still meeting new friends. Still thinking how lucky I am to be a geriatric, despite all the downsides that age brings, but keep reminding myself it’s still so much better than the alternative. Still enjoying some awesome red wines, and this year topped off with some great cognac, armagnac, bourbon, single malts and legendary German Beers.

To quote a good friend “Wonder what the poor people are doing?”.

Up early and out skiing. 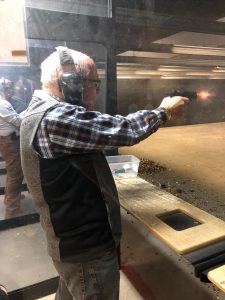 9mm so much better than my air pistol.

Then in the afternoon I’m Billy no mates as I go down to the gun range and try to puncture some cardboard. Must be getting a tad better as I get through 4 targets and a hundred rounds of 9mm. Not cheap, despite my 30 day pass, but it’s good fun and a touch of the forbidden fruit, it’s verboten in the UK. Somehow a water pistol or my Sig Sauer P320 air pistol is not quite so satisfying.

Don’t you just love the universal incompetence we’re surrounded by these days. In order to reduce risk of yet more breakages – Wendy threatened to confiscate my skis for good if I go near the hospital this year – so I always check the grooming reports. Last thing I need is to encounter any more molehills, AKA moguls; Icebergs in the middle of the slope; or witches that stamp on your skis for fun.

More snow being made – keep it up, we need it.

Back to the incompetence. Grooming report says Keystones not groomed, yet it’s the groomers pick of the day. Now go figure that. What can you expect there’s a computer involved again. Time for a spot of cheap entertainment for the Netflix ogling masses, with some Damnatio ad bestias (Latin for “condemnation to beasts”, a form of ancient Roman capital punishment in which the condemned person was killed by wild animals) feed the incompetents to the lions in a Flavian Amphitheatre Saturday afternoon spectacular. May sound a tad harsh but certainly stop them screwing up again.

I wonder which so called religion of peace, understanding and FREEDOM OF RELIGION treats women like this? 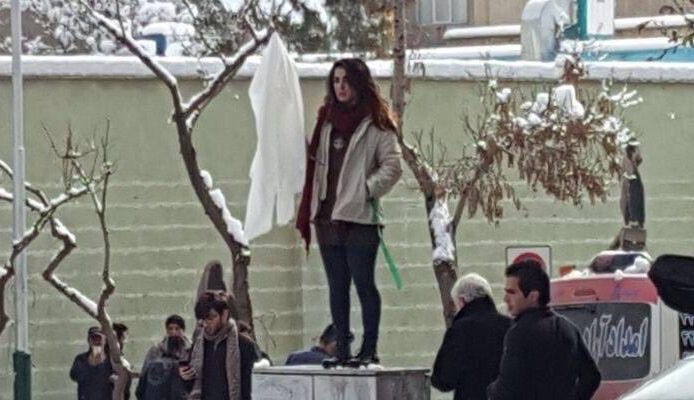 Narges Hosseini is an actual feminist. WHERE ARE THE FEMINISTS OF THE WEST SPEAKING UP FOR HER RIGHT NOT TO WEAR THE HIJAB? LINDA SARSOUR? ANYONE?
Women such as Narges Hosseini and Vida Movahed deserve the wholehearted support of all free people. That they do not receive it from the supposedly feminist Left reveals the self-serving hypocrisy of Western PC snowflake feminists.

Narges Hosseini, who was arrested for protesting Iran’s compulsory hijab, refused to appear in court to face charges punishable by up to 10 years, including “encouraging immorality or prostitution.”

“Ms. Hosseini did not even appear in court to express remorse for her action. She said she objects to the forced hijab and considers it her legal right to express her protest,” Hosseini’s lawyer, Nasrin Sotoudeh, told the Center for Human Rights in Iran (CHRI) on February 5, 2018.
Hosseini, 32, has been in detention since January 29, 2018. She was unable to pay the $135,000 USD bail set by the judge presiding over her case.
She was arrested on January 29, 2018, for posting a photo on social media of herself standing on a bench holding her white headscarf like a flag on Tehran’s Revolution’s Street.

I’m bet you’ll all be surprised to hear that, thanks to Islam, ALL women in Iran are required to cover their hair and bodies in public.