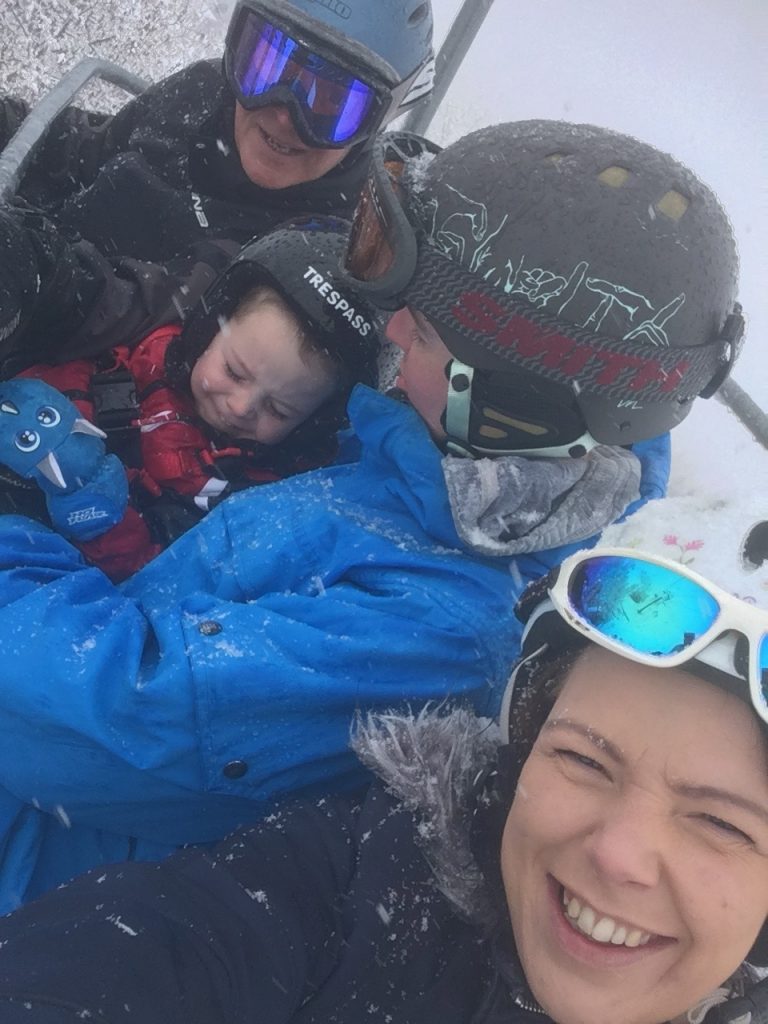 Jasper even skis in a raging snowstorm. Proud of him.

After yesterdays rain today we have a snow storm. Not really a good day to ski. 6″ fresh powder onto of a slush puppy, a snow blizzard and poor visibility, but my intrepid little skier, Jasper, ventures forth. One good thing is there’s no lift queues at the First Time lift, very few people are out to get the crazy skier award. 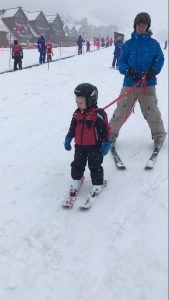 Jasper on leashes so we can slow him down and stop him.

Jasper has a great run down First Time despite the snow and despite the ski run being badly chewed up. He takes it in his stride and thankfully is on leash to stop him.

After lunch it’s yet another trip down to the Outlets.

Bob and Marilyn come round for afternoon tea to meet Jasper and Beatrix and the kids.

Tommy Robinson says it as it is:

Yes, he’s an extremist, and I don’t support a lot of what he stands for, but sadly, in this case, it’s the truth. Our government’s let us down. How can our security services possibly keep track of so many 5th columnists in our midst. 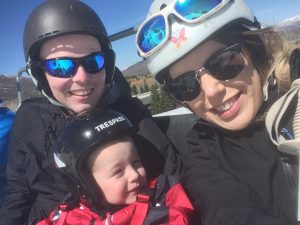 On the First Time chairlift on a blue bird day.

It’s a blue bird day. We’ve had some fresh snow and the runs are pretty good.

Thankfully I’ve survived skiing for 42 days this season with no major accident. I’ve been very cautious so I finally get to ski with my start pupil, Fiona, after 2 years.

Fiona and I leave Beatrix and Jasper with Kurt and Wendy as we head off for a morning’s skiing together. I think she’s more nervous about leaving Beatrix and what if she needs feeding, than about skiing. We get to the top of the mountain. I assure her we can be back down to Beatrix in minutes if we get the call for fresh milk. Really depends on how fast she skis. 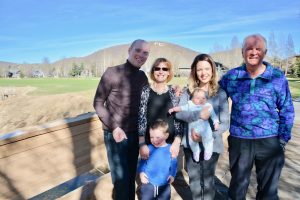 We have a great morning together. Get in about 6 runs and she’s does really well. She’s not forgotten any of her ski skills.

After 3 hours skiing we meet everyone in the Legacy Lodge at the base for lunch. Beatrix has been fine and not needed feeding so Fiona’s had 3 hours of time to herself and enjoyed a great mornings skiing.

Butties are smuggled into the restaurant by Wendy, we take Jasper onto First Time. Kurt manages to sneak a couple of free rides upon the lift and then Fiona takes the reigns and brings Jasper down for a 3rd run. He’s doing some awesome and fast runs straight down. Still no sign of a snowplow or being able to stop but he’s starting to master tuns on parallel skis. Oh well target for next year is snow plow stops and then he can ski without the need for leashes.

Nearly have tears when we come off as he wants to go up for more.

A quiet family evening on the last night for kids. 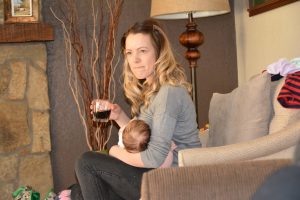 Property is theft. Nobody “owns” anything. When you die, it all stays here.

The best thing about living at the water’s edge: You only have assholes on three sides of you, and if they come this way you can hear them splash.

The future will soon be a thing of the past.

The planet is fine. The people are fucked.

The real reason that we can’t have the Ten Commandments in a courthouse: You cannot post “Thou shalt not steal,” “Thou shalt not commit adultery,” and “Thou shalt not lie” in a building full of lawyers, judges, and politicians. It creates a hostile work environment.

Well I bet all those marching against Trump and BREXIT will be out in force today outside their nearest mosque with placards and chants against ISLAMIC fundamentalism and these hate preachers. Don’t hold your breath. 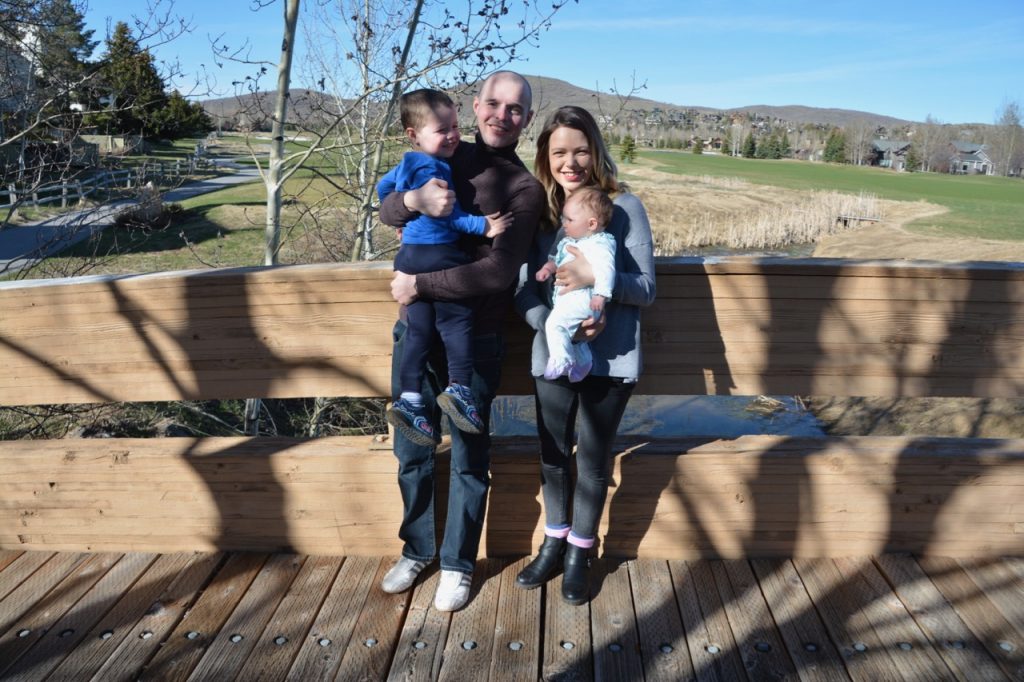 And no doubt the truly devout moderate British Muslims will be screaming from their minarets on how they intend to expel the fundamentalists from the Mosques and hand them over to the authorities.

So what have our government done about this recent terroist attack?

1st the house of commons suspended business when the attack was taking place. So much for business as usual. Surely the bold message to these gutless islamic fundamentalists would have been to carry on business and show them we are not cowed,.

2nd they’ve ordered the flags flown at half masts. Well thats going to strike fear into the heart of the jihadis. We need to recognise we are at war and take some harsh measures. 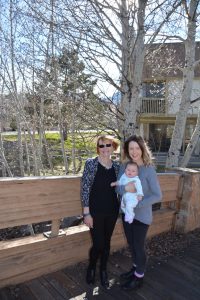 Never mind winning a battle of hearts and minds, I think it’s really about time we fought back. Here’s my two penneth:

1 Stop admitting back into the country anyone who fought for ISIS. So far we’ve re-admitted over 400. Deny them entry. I couldn’t give a rats if they’re made stateless. Lets find some 7th century barbaric islamic hell hole of a country and ship them there, or to any country of their choosing that will accept them, even if we have to pay that country.

2 As for the 70 terrorists due to be released from prison lets ship them out too.

3 Anyone found guilty of terrorism should be in-prisoned for life, I’d even bring back hanging, and their immediate family shipped out to the hell hole.

4 Close down the mosque that anyone convicted of terrorism attended.

5 Ship out to the hell hole, or a country of their choosing that will accept them, the leaders of the mosque that anyone convicted of terrorism attended, along with their immediate family.

6 Lower the burden of proof for terrorism.

Sounds harsh, but we’re at war and the threat of deportation certainly worked for Sarkosy when he quelled the French riots. 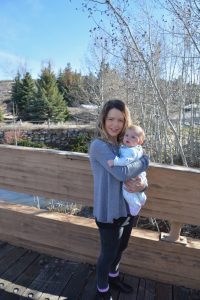 Up at the crack of sparrows to take the kids and grandkids down to SLC airport. Sad as their 11 day holiday comes to an end. It’s been great having them and we’ll miss them. How will we cope with all the peace and quiet. What no toys to climb over.

It’s raining so thankfully we pass on shopping in Salt Lake. But as a consolation prize use we get to go to Smiths supermarket to top up while we have the drug mobile.

I’ve my own philosophy for driving on the interstates over here. Stick in the middle lane and then you don’t end up snookered into an exit lane. Bugger being in the way. They undertake anyway, so it’s no problem.

Lazy afternoon then in the evening we’re back on the social whirl as our next door neighbours Dominique and Sam come round for drinks. Can you imagine that happening in the UK? What friendly people, within just 5 minutes they’ve offered us their 3rd floor to store any of our gear. And of course, in true American fashion they come armed with wine and home made Swiss cookies – delicious.

A great evening just getting to know one another. They’re leaving on Monday but will be back in summer. Looking forward to seeing more of them and the block party in July.

“[Islam] is a religion and is a belief system that mandates warfare against unbelievers for the purpose for establishing a societal model that is absolutely incompatible with Western society” — which is a demonstrably true statement.
Sunday – cool and sunny. 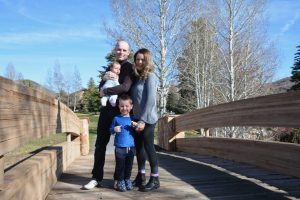 Another 3″ snow yesterday day. After a day off and several days just on First Time I’m back in my routine. Up at 07:00; good breakfast; great coffee; gear up; catch the bus, despite having the luxury of the drug mobile; hit the slopes. A blue sky day and a tad cool so I have a mid morning start.

That’s 43 days this season, despite what the Epic Mix says, it doesn’t know everything.

Another day in our social whirl as we head off to Bob and Marilyn for dinner along with Helen and George.

Then on the way home it’s time to say goodbye to our drug mobile, a GMC Yukon XL, as we drop it off at Hertz.

Well the wave of life celebration this time has to go to having our kids and grandkids out here with us. Never a dull moment. They’re all great company and getting to ski with Jasper and Fiona has to be the highlight of my holiday. Well worth all the cautious skiing to ensure I made it without injury.

Amazing isn’t it the similarities of scrots in both the UK and the USA. In the UK we have those who are too lazy to walk a few yards, so they abuse disabled and mother and infant parking slots. Here in paradise we have the lazy scumboarders, and I have to admit skiers, who just can’t be arsed to walk an extra 10 feet to put their gear in the copious racks provided. Instead they just litter them on the snow for people to trip or ski over.

Just imagine if we all did it there be no room left to ski. 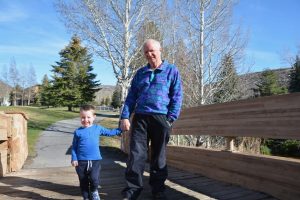 Me and my super start skier.

Wow isn’t it quiet and oh so tidy. Walking across the floor is no longer a life threatening perilous event, dodging all the toys. But we miss them.

Wendy’s off with Helen and Marilyn down to the Outlets to have a girly day out. Probably practicing for the 100 yard Outlet trolley dash event. Just cruelty to credit cards.

Helen backs out of a ski day. That’ll probably jinx the major snowfall thats due.

I have a fraught morning trying to re-install Dreamweaver and setting up FTP. Then escape for some sanity up the mountain.

A relaxing afternoon mesmerised by the snow falling. Wendy returns with some shopping bags. Now there’s a surprise.

Perhaps it’s time for the quran to be put on trial for hate speech and even ban it being sold. 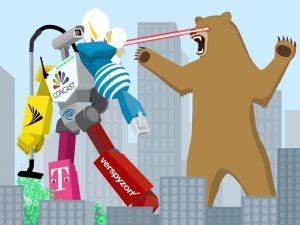 On Thursday, March 23rd, the US Senate voted to let internet service providers (ISPs) sell your web browsing history without your permission.

If you live in the US, your browsing habits can now be sold to advertisers and third parties. If you live somewhere else, it’s unsettling that this is already a $24B industry.