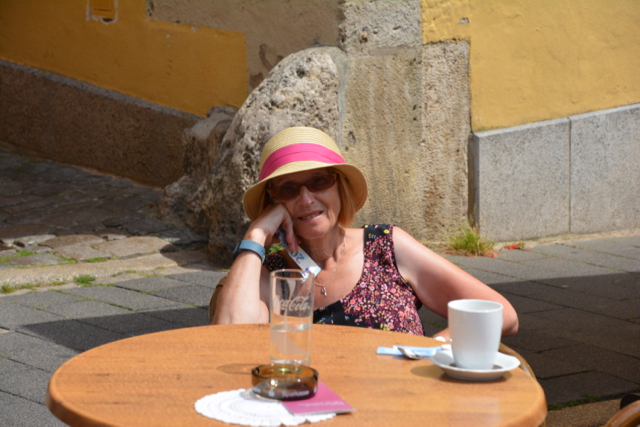 Drive up to Rothenberg, one of the most picturesque towns in Germany. It takes nearly 2 hours with all the road works and traffic jams. 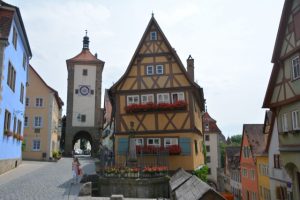 Have a pleasant wander around. It’s our 2nd time here but it is pretty. Coffee and lunch in the main square and then we’re serenaded by a choir from Wisconsin followed by a full orchestra from Wisconsin to play popular classics. All very relaxing and enjoyable, and best of all the music was free. 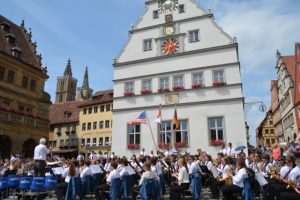 Wisconsin orchestra play for us in Rothenberg

On our way home we pop in to see Andy and Gerd’s supermarket. Wow, it’s massive and all very modern and swish. Have a grand tour with Andy and then a coffee.

Dinner of wild boar in the town square at Konigstein.

Well I’ve finally confirmed that these bidets are really a foot bath as I discover a pumice stone and skin rasp on the side of one. Either that or someone has very sore genitalia.
Tuesday – hot and sunny 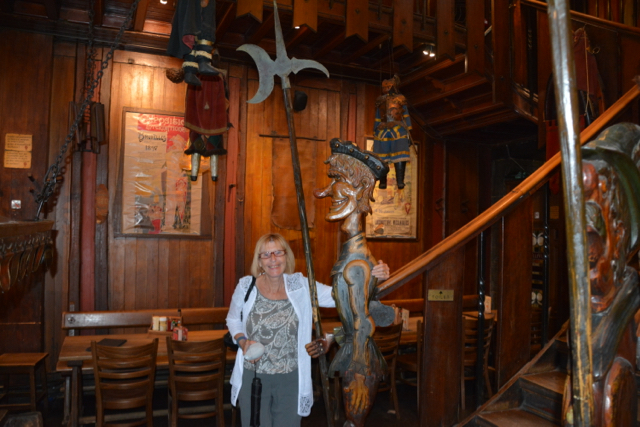 Dinner in the Grande Place Brussels

Had a lovely junior suite here. Well equipped, comfortable, clean and typical Teutonic efficiency. Good continental breakfast. Excellent wifi. Hostess took a real pride in the place, the food was great and she was very helpful. 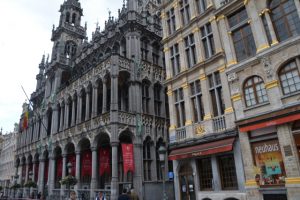 Early breakfast and then set off for a 6 hour, +400 mile, drive to Brussels. Road works introduce a few delays and at one stage satnav is predicting 120 minutes delay. Accept the diversions and we only suffer 30 minutes.

Our hotel is slap in the centre, only yards from the Grand Place. Thats the good news. The bad news is it’s a nightmare finding it. For some reason satnav leads us totally astray and has us going around in circles, just before we spiral up our own backsides she finally comes to her senses (note the female element) and gets us there. 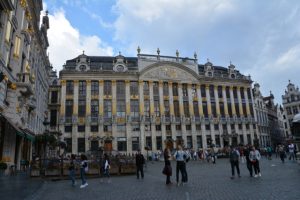 Check in and then have a pleasant wander around. Wendy’s never been to Brussels before, so we have dinner on the Grand Place and then I take her to the chocolate shop I used the last few times I came here. She can’t resist but she has to eat them all within 3 weeks.

Let’s prank ISIS, nothing to do with Islam of course – part 1: 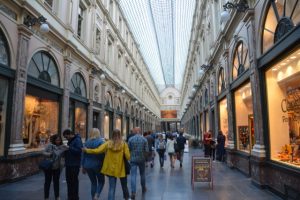 4 star hotel within yards of the Grande Place. Great location. Good room, comfortable and clean. Wifi was a tad temperamental, but pleased to report electricity and water were OK. Good breakfast.

Being in such a central location it is a nightmare to get to, especially when your satnav goes on a bender and takes you round in circles. Good public car park next to hotel. 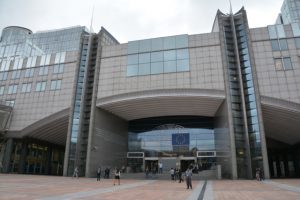 After a good breakfast we head for the hop on and off bus tour. Although in our case it’s mainly stay on, but can’t resist a look see of the Evil Union parliament, before it collapses under the weight of it’s own megalomania, greed and corruption. The free parlimentarium is pretty well done and free – well we’ve paid for it with our taxation without representation, the 1776 battle cry. Although like the EU 30% of the exhibits don’t function.

Then it’s back on the bus and pick up the outer Brussels tour.

Get back just in time to set off for a 2 hour drive to Rotterdam. 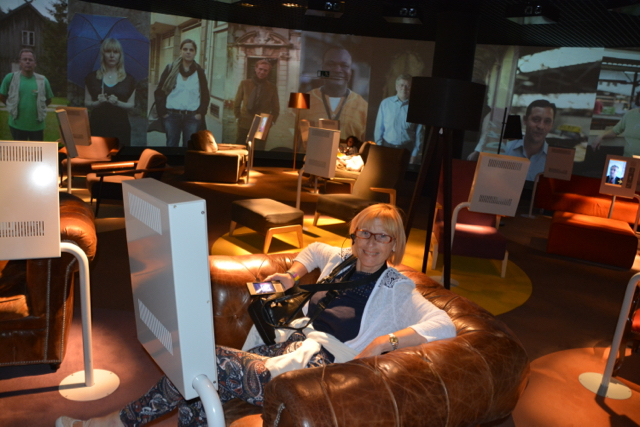 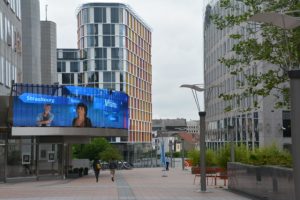 Arrive in plenty of time for the ferry but the great thing is they let you onboard more a less straight away, so no hanging around and you can start spending right away. Have a lovely buffet tea, some drinks and then stock up un some quality brandy for me and perfume for Wendy. She treats me to some quality YSL smelly stuff.

Then it’s off to bed while our hotel floats over to Hull.

Meanwhile here’s a link to a blog posting I did for HomeExchange.com – AN EXPERIENCED APPROACH TO HOME EXCHANGING. Earns me a free years membership. 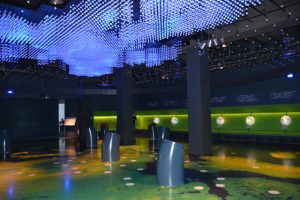 Quality breakfast and disembark quickly. All very efficient, apart from UK customs who seem to lack any form of common sense. That’s Wendy’s second cruise this year. Oh I do spoil her.

Then it’s a 90 minute drive to Belthorn and for once it’s not raining when we get home and there are no traffic jams once we get out of Hull. 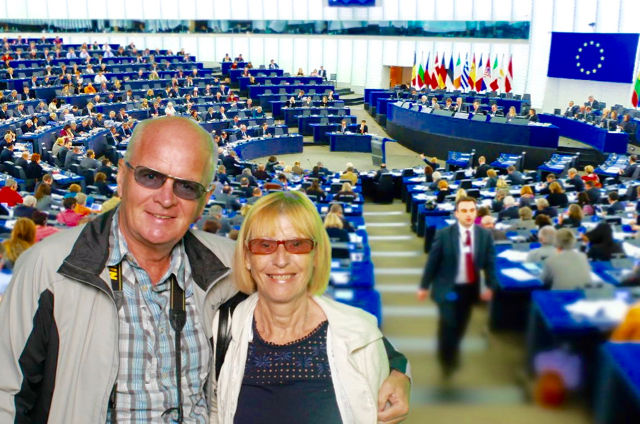 As a finale we just pop into the Evil Union parliament to see it before it’s demise and to give Junker an unemployment application form, ready for when the wheels drop off the gravy train. Perhaps, if he’s lucky, he will get a job as a guide around all these buildings when they’re converted into a museum of anti-democracy, failed experiments and Empire building.

The gravy trains coming to an end.

Well that’s the end of our Grand European Tour, with Edwards Into Europe. What do we think? Well although we haven’t visited all the countries below on this trip I’ll give you my jaundiced view on Europe, starting at the bottom and working our way up: 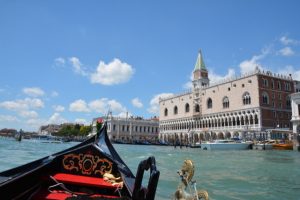 Greece – certainly the basket case of Europe. Screwed over by the wealthy North. Used EU funds to bribe off the Unions. Should never have joined the Euro and are now in dire straits. At least if they were out of the Euro they could devalue and stand some chance of rebuilding their economy. 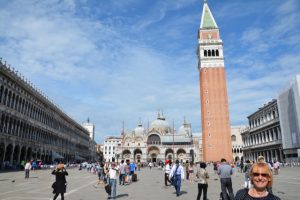 Spain – it’s just unfinished and as Wendy wil. Everywhere we went nothing was finished off. Again in serious financial straights and high unemployment. 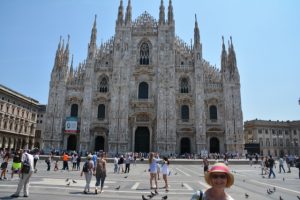 Italy – most of the old cities are past there demolish by date, they’re lovely but a tad seedy. We’re suffering from an overdose of culture, but we really enjoyed it. Apart, that is, from the roads. They’re lunatics and I wouldn’t trust any of them to drive a fair ground dodgem. All a load of exhaust bandits with a death wish that compels them to try and drive up my exhaust pipe. The rear view mirror is your best friend. Wendy was a bag of nerves and she never even drove. Another pending basket case with massive bad debts, economic problems and massive youth unemployment. Screwed over by the wealthy North of Europe. Watch this space for another Greece re-run. On the plus side not too many mossies. I’d like to explore Southern Italy but I think I’ll either have to drug Wendy or blindfold her to get her there. 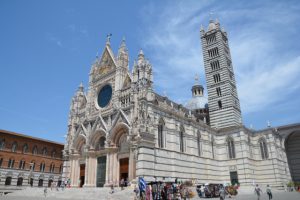 Belgium – sad and grey. At the heart of the Evil Union. Wonder how they’ll survive when the EU finally collapses? Won’t be sad if we never go there again. Mind you their chocolates are awesome, but their beers are badly over rated. 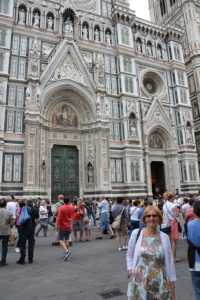 France – well best summed up by the simple statement a lovely country spoilt by the French. Dominated by the unions, forever on strike over something or other and I’m convinced they’re living well beyond their means and only a matter of time before economic reality catches up with them. Badly need a strong dose of Thatcherism to tame the unions. Sadly the terroist attacks are a grave danger. It has too big a muslim population – perhaps a wake up call to the rest of Europe as to the dangers – and at this rate will swing to the extreme right and even have their own FREXIT. 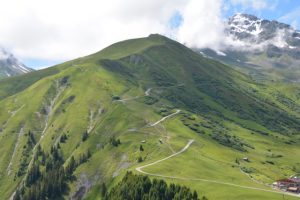 Austria – beautiful wealthy country with all the Teutonic efficiency of Germany. Awesome scenery and mountains. Good skiing. All very civilised. Be interesting to see whether a re-run of their election this Autumn results in a strong right wing government. Seems very much on the cards. We’d love to go back their in summer but don’t think we’d forsake the awesome American skiing in winter. 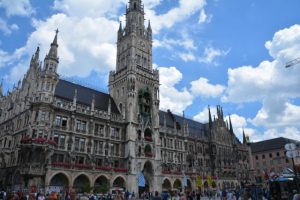 Germany – efficient, prosperous, organised, awesome beer and great food. Certainly a country we’d go back to. I don’t think the Germans can really understand why BREXIT, but they’re living off the fat of the EU.

I never understood the structural economic issues until I started to look around eat all the prosperity and question it all, especially in contrast with Italy and Spain. Ironically Spain and Portugal are to be sanctioned for breaching EU fiscal rules, in a move set to inflame political tensions over how dogmatic Brussels should be in policing national budgets. 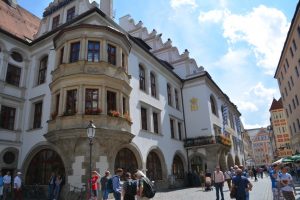 The European Commission concluded that the two countries had failed to take “effective action” to meet EU deficit rules, they are now on a path to penalties that could include fines or a partial suspension of EU regional funds.

Germany, Finland, the Netherlands and the European Central Bank insist that firm application of the budget rules is essential to maintain confidence in the euro. Yet Germany’s record trade surplus is a bigger threat to euro than Greece. If EU law were properly enforced, Germany would face fines for endangering eurozone stability and breaching the Macroeconomic Imbalance Procedure for the fifth year in a row. 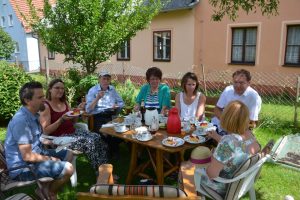 Whilst Germany carps on about Greek bailouts etc., they need to remember that the Southern Mediterranean countries are helping keep the Euro lower. If they were still trading on the Deutschmark it would be so strong as to cost them so much more than the bailouts. Arguments that it would be a good thing if Greece left the Euro miss the point. For the southern Mediterranean countries it would be better if Germany left the Euro. 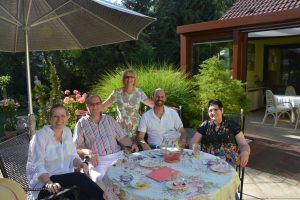 Having said all that we’d rather be in Germany and will be exploring further.

As for BREXIT. Well yes we’ll suffer in the short term but we remain convinced it will be so much better for the long term.

Well that’s the blog over for this trip. Just go to a countdown for the number days until we escape for our 3 month California adventure.