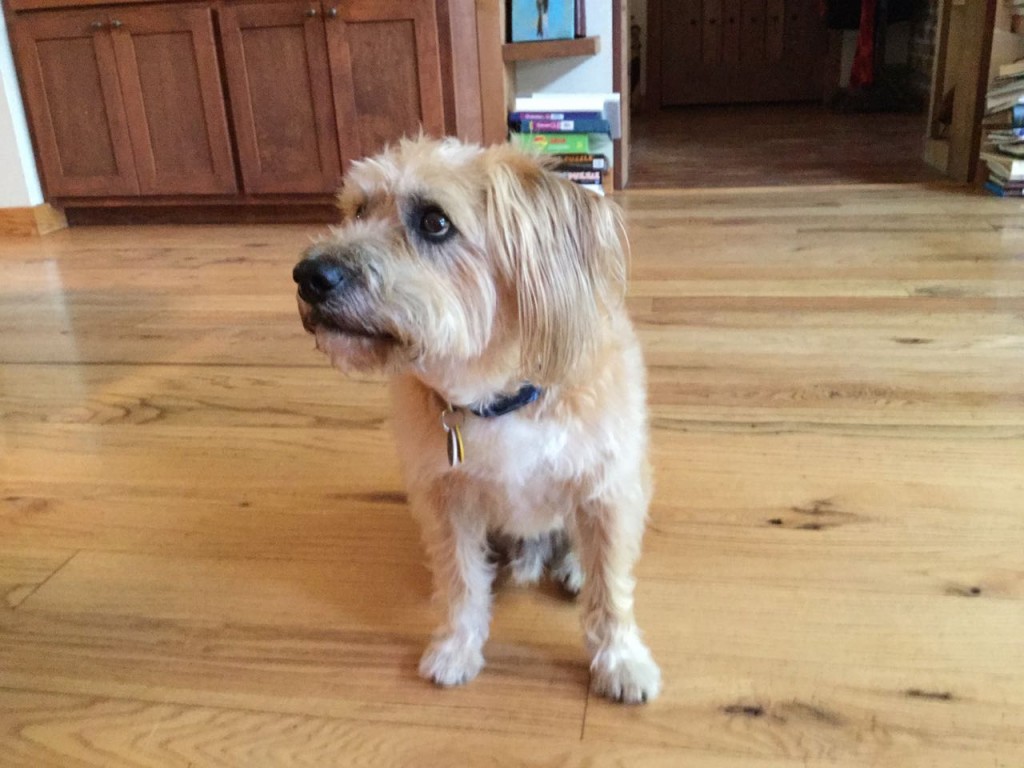 Well we’ve a 380 mile drive down to San Antonio. We start off driving through a dust storm, complete with tumble weed. Any moment now John Wayne will come riding out of the dust. At least it’s Interstate most of the way and a cracking 80 MPH. Even 70 MPH on the side roads but then it is Texas, everything’s bigger. Looked at stopping off somewhere to break the journey up, but there’s nothing but dead cactus, nodding donkeys and road kill between Alpine and San Antonio. Never mind at least we’re heading back to civilisation. A game to keep us both amused is, sixpence to the first one to spot a Starbucks.

Wendy wins the sixpence. And then we know where nearly there. More Starbucks than empty coffee cups littering Blackburn’s “pristine streets”! Call in for a dirty Chai with two extra shots (free). Contributes to making me normal. 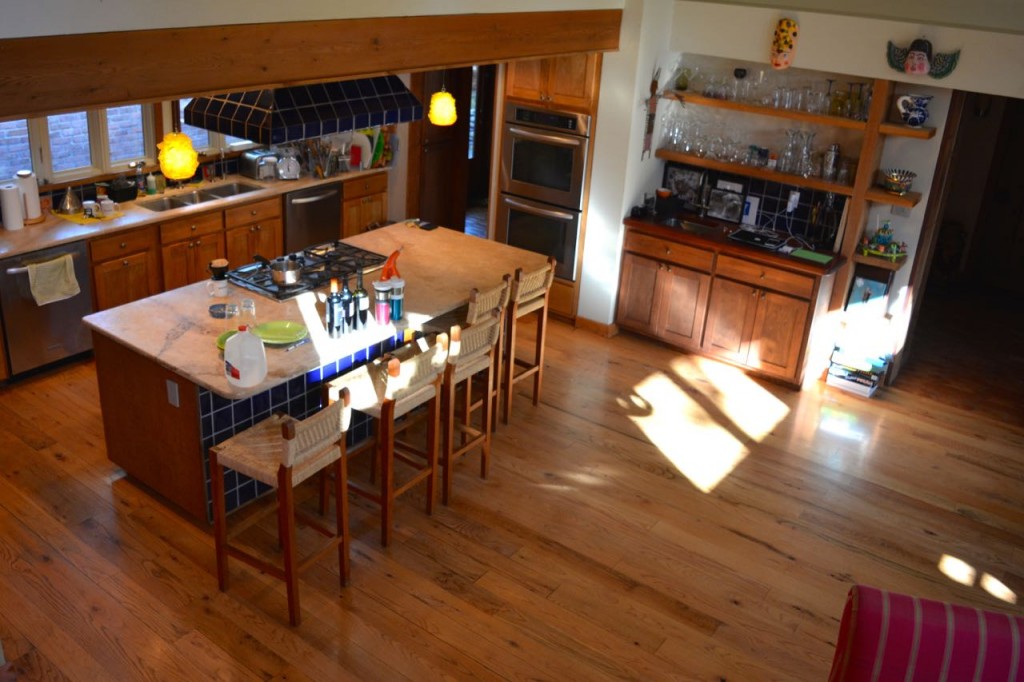 No doubt Texas has a major problem. It’s just too darn big.

Arrive at lovely hotel. But as we set off to find a sub way we turn left onto the road. Yet again it’s a one way side of a dual carriage way. Yet again completely dark; no indications; not even a sign this time. Fortunately there’s hardly any traffic so we survive. All part of the nightmare of driving at night in a 3rd World country where photons are banned.

Catch up on some TV with awesome 30Mbps wifi.

At last some imagination and smarts applied to the shopping process. Coming soon at Sainsbury, if you can afford to shop there:

At last some smarts applied to shopping.

I see that our politicians are yet again getting to grips with the big important issues of the day:

THE road sign that shows a hunched couple clutching a stick as a warning to drivers to slow down should be banned because it deters employers from giving the over-50s a job, says the government’s tsar for the elderly. 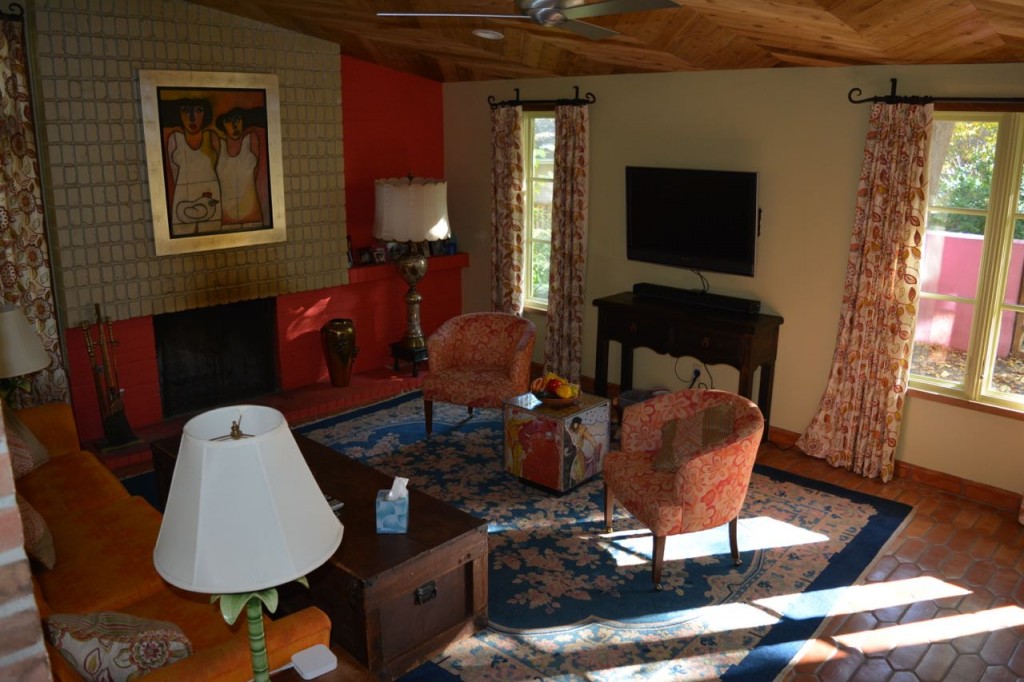 Up for a pathetic breakfast. Being Monday they say they’ve run out of bananas and bacon. Never mind when I come to pay the bill they’ll no doubt understand when I tell them I’ve run out of dollars!

Off down to the Alamo. It’s in the heart of Downtown. Fleeced for parking, but it’s free entry – well done Daughters of the Republic. I think this place must be run by retired TSA staff, they manage to create a queue by trying to sell everyone a photo on entry. Interesting place with a History channel film explaining what it’s all about. Not as impressive as I’d expected, a tad disappointing really. Very busy and they have done a good job of preservation, but I think we’ve been spoilt by all those National Parks. The area around it’s a seedy as Blackpool.

Coffee at Riverside Starbucks and pick up Kurt’s baseball cap from Lids.

Then in the afternoon we drive down to our home exchange for the next 6 days to meet the owners, get acquainted with their dog Tucker and be familiarised with their house.

Burger joint – Red Robin – for tea. Excellent burger. Then try and watch “The Alamo” on Netflix but alas they don’t have it. 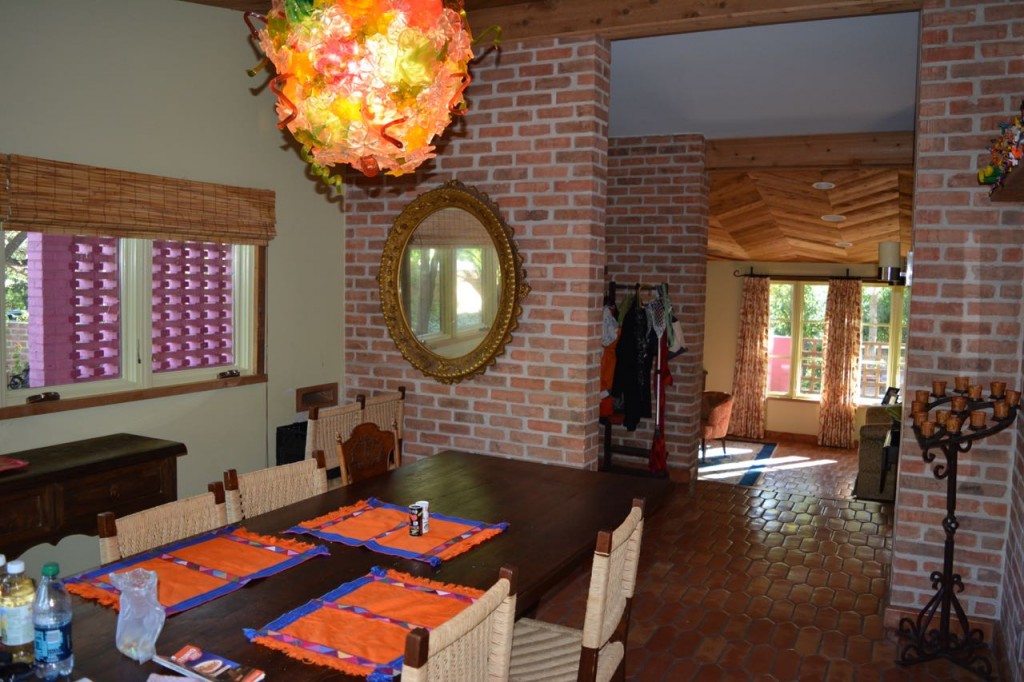 Move into our new home exchange for 6 days.

Get settled in and then off to drop the Hertz mobile off. Wendy follows me, with some serious trepidation on these super highways full of schizophrenic exhaust pipe huggers, who would slaughter their whole family, just to get one car ahead.

Then it’s the weekly shop. Unfortunately we find a Wholefoods. 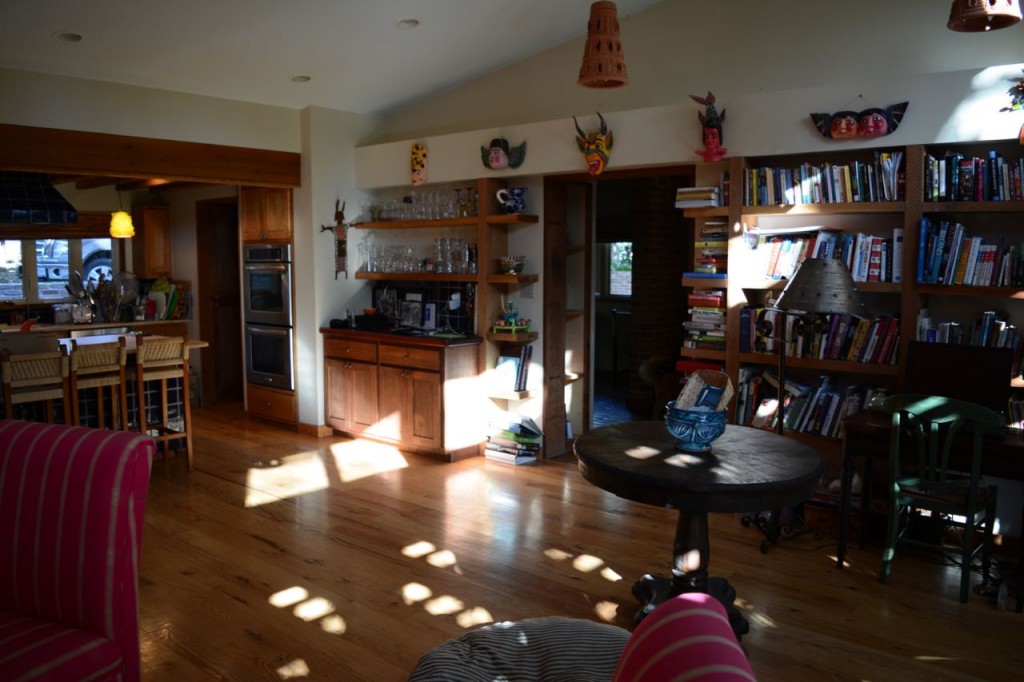 We’ve got a VW Passat as part of the exchange. Well next time you see one of them sickening, bragging adverts about German engineering, ponder this. It’s so well engineered you can only see the cruise control – essential in BIG TEXAS – when you’re turning 90 degrees right or left. The rest of the time it’s any bodies guess how to use it, unless of course you lean forward and bend your head in front of the steering wheel – not recommended when surrounded by psychos in metal monsters. Unbelievable and so dangerous.
Why Starbucks can’t spell:
Wednesday – hot and sunny. 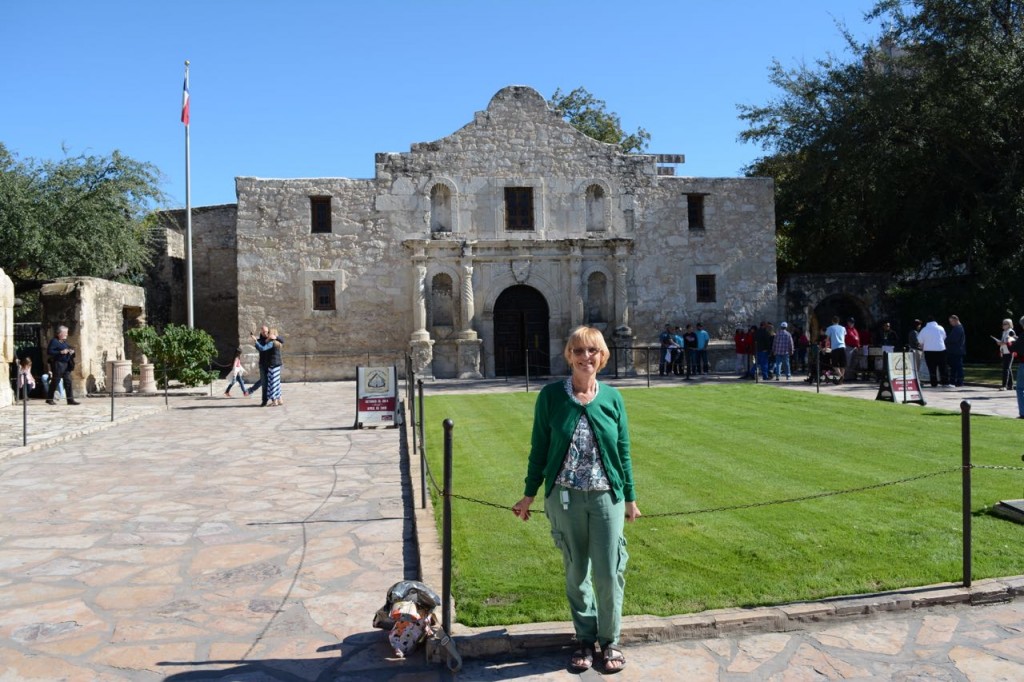 Wendy in front of the Alamo.

Drive down to the River Walk. It’s such a pleasant stroll through the Downtown area, with a “few” restaurants. You wouldn’t believe you’re in the heart of a major city. It’s lovely – so reminds me of strolling down a canal path back home, except their’s no rubbish, no shopping trolleys or no road cones in the water. What imaginative use of a natural resource and I’m sure it brings much prosperity to the City.

Have a 5 mile stroll and despite the plethora of restaurants fail to find a Starbucks. Well we do but it’s closed with a scrawled sign on the door “sorry for the inconvenience” – no reason, obviously incompetence. 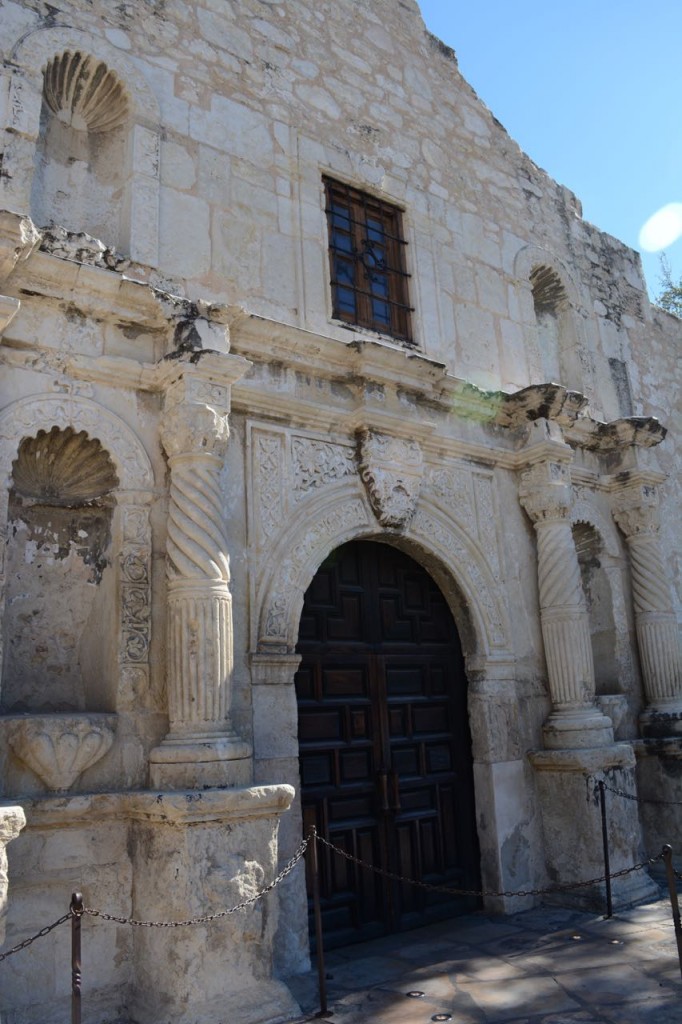 The Alamo – no John Wayne though.

Peter’s Laws (The Creed of the Sociopathic Obsessive Compulsive)

If anything can go wrong, fix it! (To hell with Murphy!)
When given a choice, take both.
Multiple projects lead to multiple successes.
Start at the top and work your way up.
Do it by the book… but be the author.
When forced to compromise, ask for more.
If you can’t beat them, join them, and then beat them.
If it’s worth doing, it’s got to be done now!
If you can’t win, change the rules.
If you can’t change the rules, then ignore them. 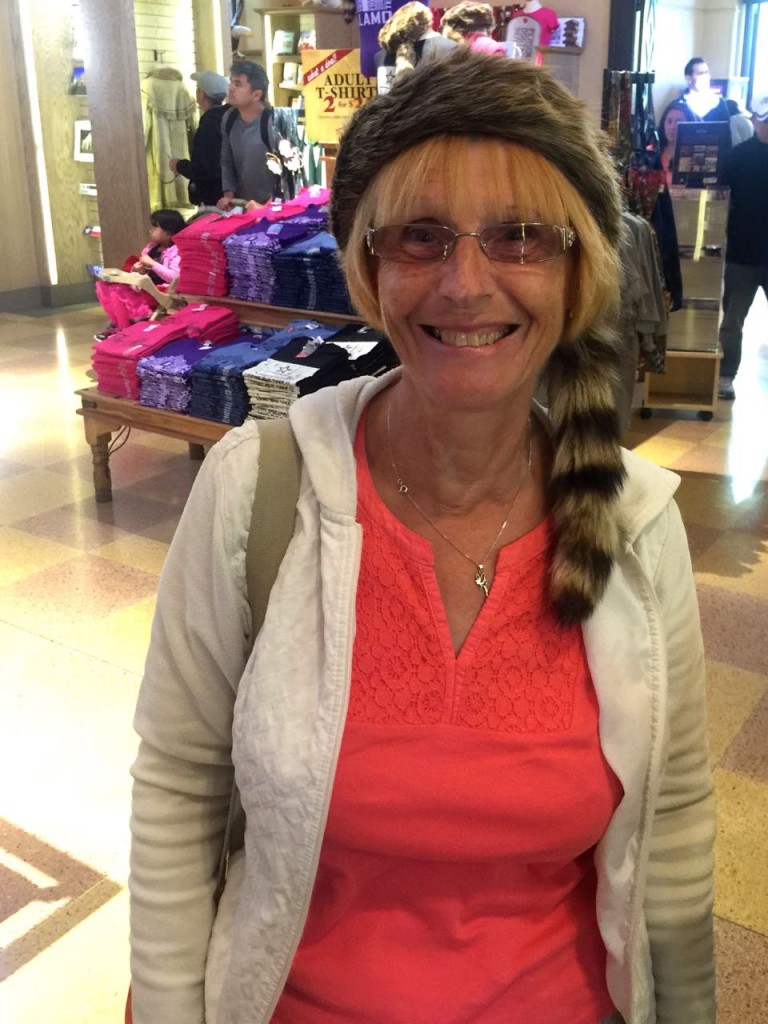 Happy Thanksgiving to one and all.

We drive up to Horseshoe Bay (this is the place we’ll be staying in for our last 2 weeks) for Thanksgiving dinner with Lee and Stuart and some of their friends. Another great American experience and being Texas the Turkeys been pardoned in favour of some hefty steaks – Texas Big – as thick as a Russian female shot-putters thigh. As seems to be mandatory over here, the steaks are cooked on the giant all American Barbecue, outside and of course the domain of the all American male. No 12″ square, one shot, aluminium tray barbecues. 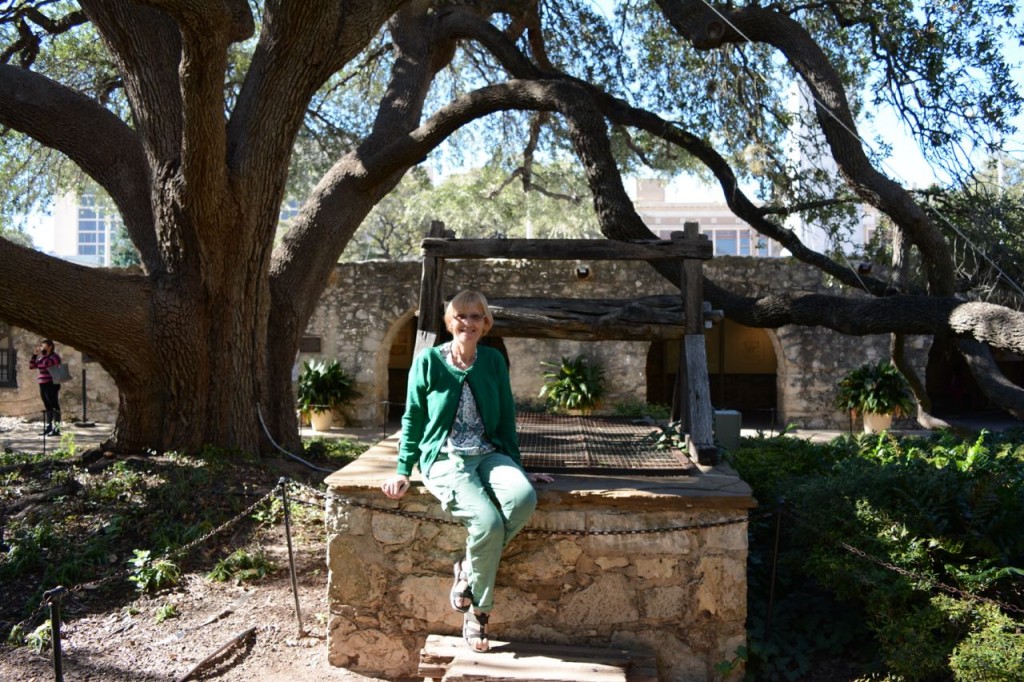 Steaks are followed by the traditional Pumpkin pie and for good measure Apple pie and that cholesterol special, whipped cream. All washed down by various alcoholic beverages.

Have a great afternoon and evening of fun and laughter with new friends. 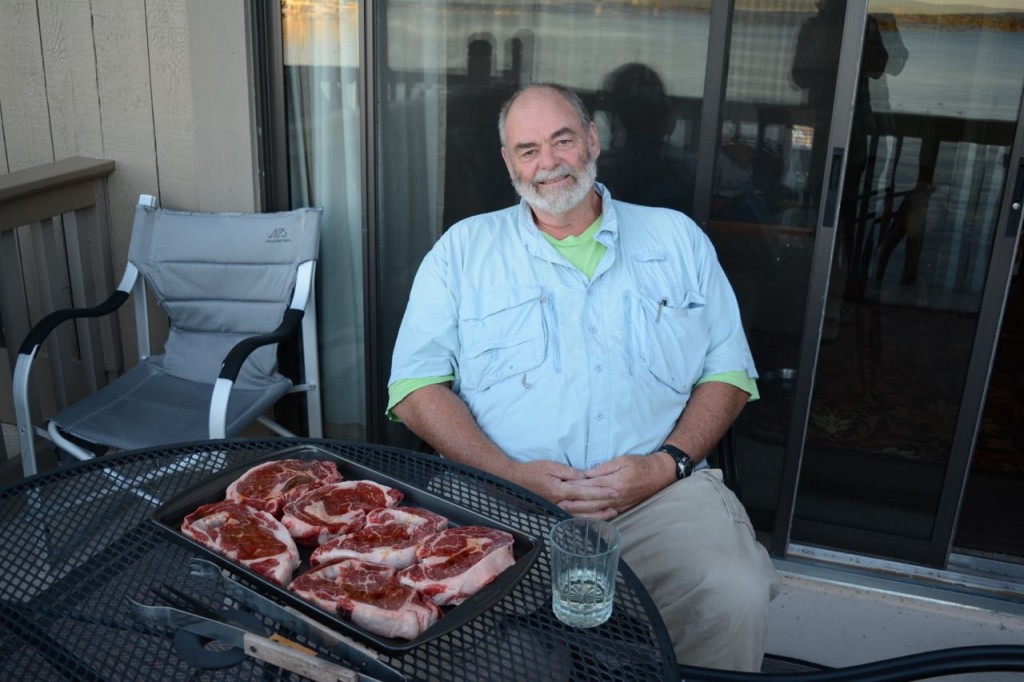 Perfection is not optional.
When faced without a challenge, make one.
“No” simply means begin again at one level higher.
Don’t walk when you can run.
Bureaucracy is a challenge to be conquered with a righteous attitude, a tolerance for stupidity, and a bulldozer when necessary.
When in doubt, THINK!
Patience is a virtue, but persistence to the point of success is a blessing.
The squeaky wheel gets replaced.
The faster you move, the slower time passes, the longer you live! 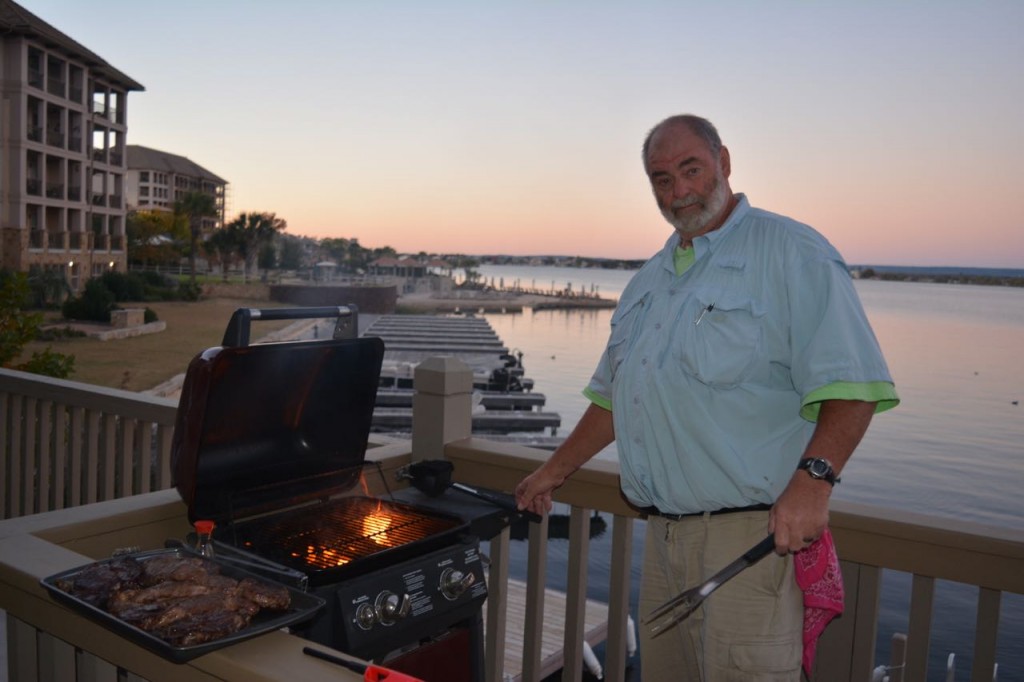 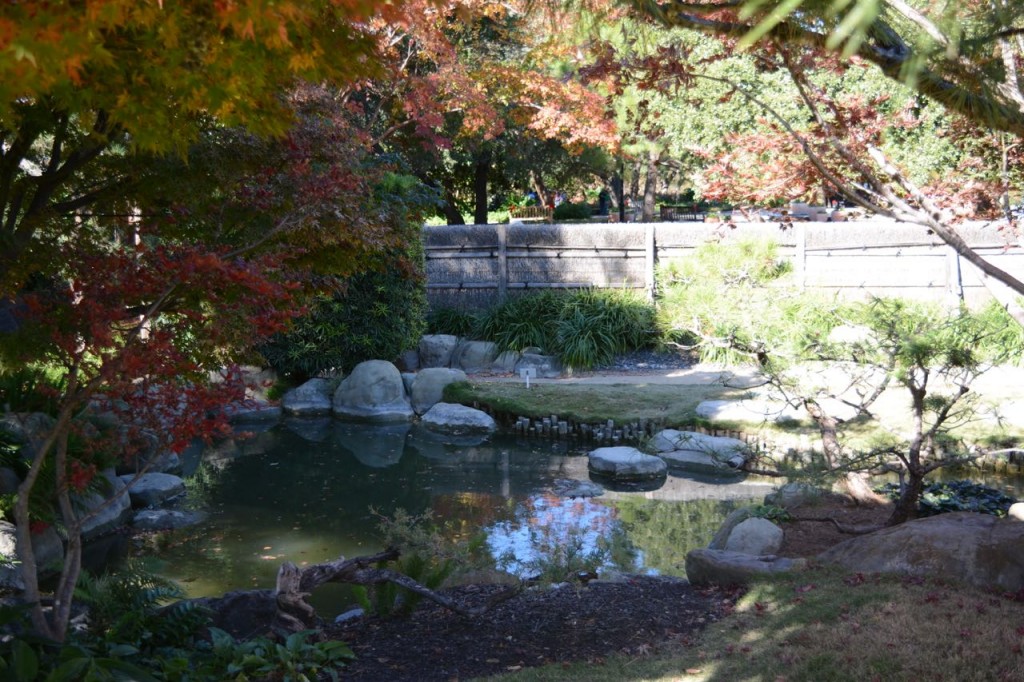 Well it’s Black Friday, but we do the sensible thing and go for a walk around the botanical and Japanese gardens. Yes, there’s a small queue to get in, but no one’s being dragged screaming across a Tesco floor clinging onto a 60″ colour TV shouting “it’s mine it’s mine”.

What has got into the World. It now seems the Black Friday lunacy from the US has infected the UK, like a dose of rampant Ebola. First they gave us Valentines day excess, then the terror of Halloween, complete with marauding bands of vicious Trick or Treaters teenagers and now Black Friday. No doubt about it, Marketing is responsible for nearly as much evil in the World as religion.

Oh how I wish I’d been there. “Fight, fight” goes up the cry in Victoria Secrets playground. Girls fight over thongs and bra’s in Victorias Secrets. I wouldn’t mind a thong on that women is a terrifying thought, it would disappear into the giant crevices of adipose tissue never to be seen again until they turned septic. All it needed was a bit of mud chucked in and Victorias Secrets would have a winning recipe to draw even more punters in.