Monday – almost a Bluebird day but we have a few clouds and its frost bite cold, enough to freeze the balls off a pool table. Fortunately have my new ski jacket and pants which keep me warmer than two hampsters farting in a wool sock. 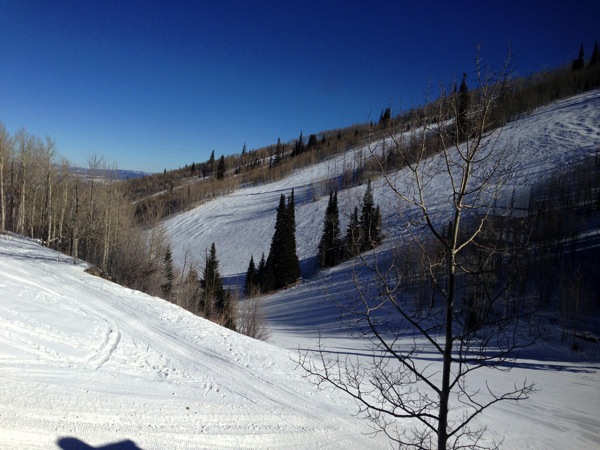 Leisurely start to the day. Cram in a great moorings skiing. Moving up a notch this week. Start on the Black Diamonds. Some serious underwear stains possible. Sadly only one groomed overnight, Combustion, short and steep. Come on PCMR you need to do better than this.

It so cold that my nose thinks it’s a tap, it’s running faster than I can eat it! Yuk.

Isn’t nature weird. There’s a Husky tied up that has a choice of sleeping on concrete huddled up against a brick wall against the wind or sleep on the open ice on the skating ring. So where does it sleep? On the ice of all places, so it’s either an innate trait or he’s more retarded than two Spaniels trying to retrieve one stick.

Reasons not to ride the lift with scum boarders: they speak a language no one outside their close knit fraternity can comprehend; every sentence ends in dude, at least you know where the full stops are; they gob all over the slope; if they’re wearing Skull Candy then they wave their arms around like an Orangatang with saint vitus dance; spend too much time adjusting their underwear so that it’s on display to all; the way they walk and dress, with waist bands around their knees you seriously fear they’ve shit themselves and it’s going to be one stinking ride.

Mercy Killing – Euthanasia, Putting Down, To Sleep, Out of Misery

More lunacy from the religion of peace: 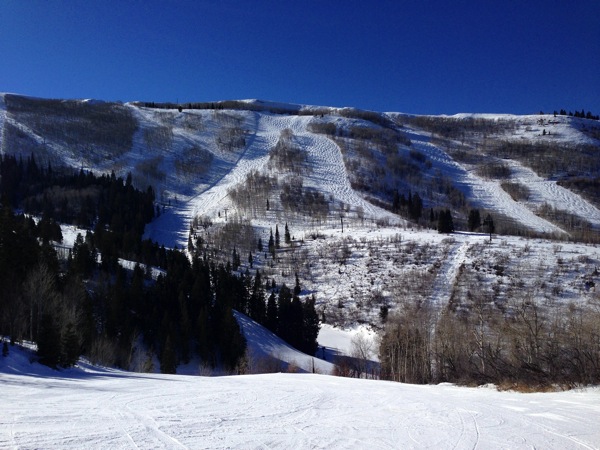 Three polio workers have been killed in the southern Pakistani city of Karachi, a day after authorities began a new vaccination drive, officials say. Reports say gunmen opened fire killing one man and two women administering polio drops. The attack is the latest in a series targeting polio teams in the country.

No group has claimed responsibility, but the muslim extremists of the Taliban oppose the polio schemes, which they claim to be a cover for international espionage.

Pakistan is one of only three countries where polio remains endemic and is indeed on the rise, due in part to this militant resistance to polio mass vaccination campaigns. 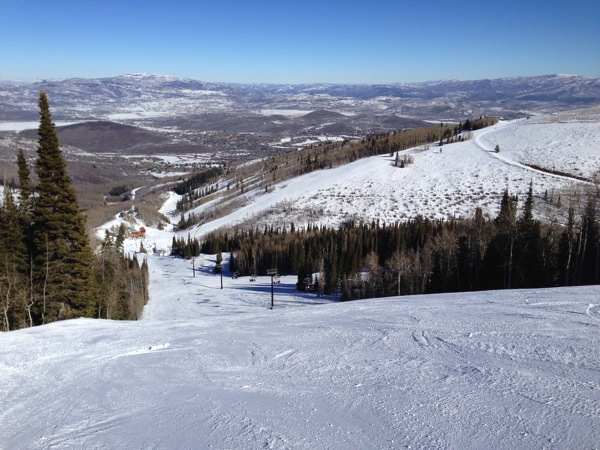 New rule: No foreign aid to Pakistan, or any other country for that matter.

New rule: No immigrants from Pakistan allowed into the UK, even if they do have a child bride or family in the UK. We don’t want polio or TB kicking off again.

Tuesday – yet another bluebird day, that’s 14 in a row, and not as cold as yesterday.

Black Diamond start to the day. Combustion again short, steep and a tad icy. Survive yet again without chewing on ice.

Wendy’s off to the outlet stores. Hope she remembers the want / need credo.

Nearly had squirrel for tea. Just missed him with my skis by 6”, perhaps next time.

Get back home just after lunch and sit in front of our patio doors with the sun streaming through, coffee, Internet of course, Kindle. Lovely and warm with mountain views. 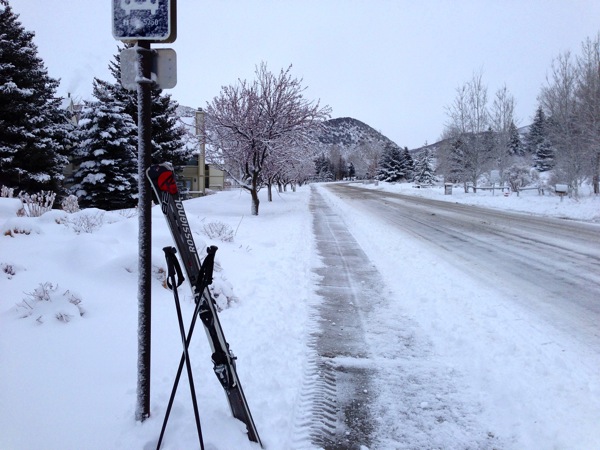 Not with somebody at the moment – romantically challenged

Book review – the Quran. Now with all my rants and raves about the religion of peace I thought it was about time to read Quran, to try and see what it’s all about. Well, I’ve finished it and here’s my book review. No I’m not converting, I’m speechless:

There’s no way this will win a Nobel prize, a Booker prize or even an Orange award for an under 10’s fairy tale. It’s the incoherent rants and ravings of someone who, if tried to publish it in this day and age would be condemned to a psychiatric ward. I wouldn’t even give it one star and certainly would’t recommend it to anyone. I’d rather be condemned to repeatedly reading “Last of the Mohicans” and “Moby Dick” for all eternity. If you don’t like my free speech opinion and book review then tough, don’t read any more, remove me from Facebook, purge my blogs URL and rat me out to the Muslim Council of GB or CAIR, but certainly don’t try and read this raving fairy tale. 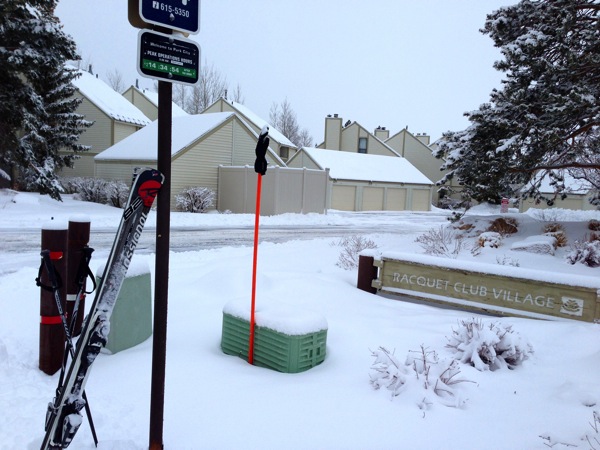 This is the word of a god! How come a supreme being is not capable of expressing himself clearly for all time? Requiring no interpretation, nor more scholars than Muslim fundamentalist at a stoning, to corrupt the message. Look at the clarity, simplicity and elegance of the ten commandments or the simple philosophy of “do unto others as you would have done unto you”. This fairy tale has none of that. Yes there are passages of mercy, love and kindness, but there’s more obsession with hatred for non-believers.

Judging by the amount of repetition I can only assume that mohammed got paid by the word count.

Believers and goodie two shoes go up to paradise full of fruit and virgins etc., etc., and the rest suffer a painful punishment in this life and go down to hell fire.

Directives, topics, diatribes, incomplete accounts of Old Testament stories appear randomly with very little stream-of-thought consistency.  Themes are disjointed and shifting, something that would not be expected of a perfect book of instruction. 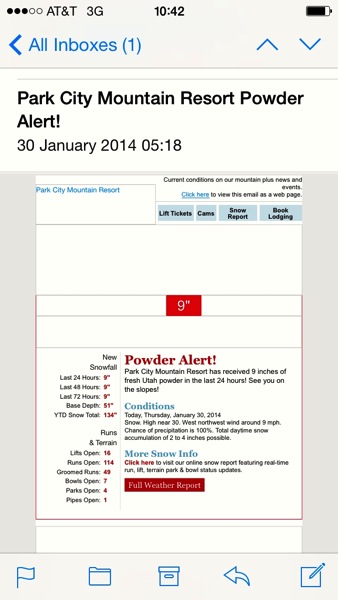 muslims and the inferiority of non-Muslims (who are but fuel for the fires of hell), even comparing them to vile animals and gloating over Allah’s hatred of them and his dark plans for their eternal torture. Naturally, the harsh treatment of non-believers by Muslims is encouraged as well. The Quran with boring repetition distinguishes between believers and unbelievers (61% of the book is about non-Muslims), drawing a sharp distinction in the value of each group and laying the foundation for discrimination and dehumanisation of non-believers.

Allah condemns non-Muslims to Hell based merely on their unbelief, while believers are rewarded with the finest earthly comforts in the hereafter, including never-ending food, wine and sex. Sounds good to me, but what if he welshes on the deal, can you really trust a deity who can’t write a simple instruction manual for life.

Not content with merely preventing unbelievers from knowing the truth (which is enough to condemn them to Hell) the Quran says that Allah also causes unbelievers to commit the very sin that he will later punish them for. How neat and spiteful is that.

I think it’s fair to say that the Quran meets every criterion by which we define hate speech.  Not only does the message inspire loathing and disregard for others, but the text mandates the superiority of Islam, even if the means of establishment is by violent force. 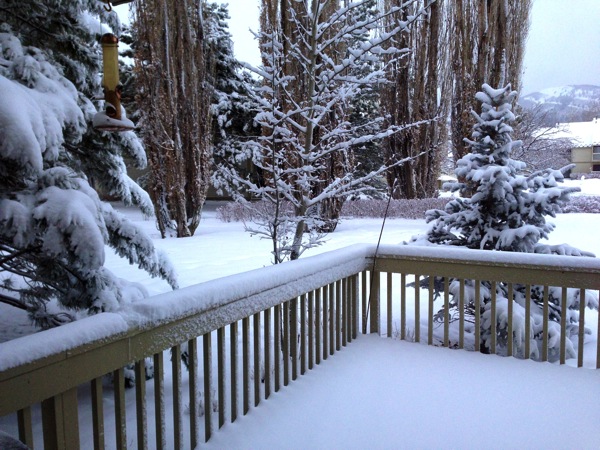 So far I think I’ll stick with the gospel of the flying spaghetti monster (FSM). Much more readable, structured, logical, no hatred and makes much more sense. Although I do think perfect powder skiing should be added to the beer volcanoes and stripper factories of FSM heaven. Next up, time to finally read the bible and a biography of the Life of Mohamed.

Wednesday – snow and must be Belthorn, rain.

Wot no overnight snow. You promised snow. I’m up at 07:00 to check snow report and get geared up for some fresh powder. Look out the window and what do I see? Nothing, nada, not even a skerrick of snow, not one single snowflake. Snow reports the same. All that bloody technology, all them petra bytes, all them petra flops, all the best brains and you can’t even keep your promise. In future I’ll stick with haruspicy and read some liver entrails from the local supermarket. 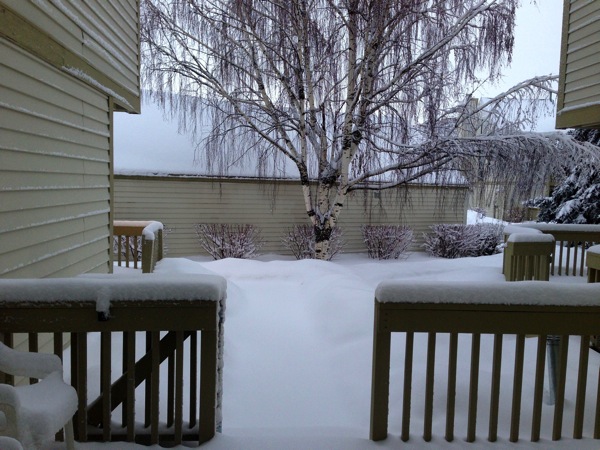 Have a few hours but flee the mountain in tears when the snow, yes it finally manages a smidgen, turns to rain.

Afternoon in sulking and reading.

Wendy’s doing the Florence Nightingale thing and volunteering in the hospital today. She’s happier than a zombie in a nursing home.

“If the freedom of speech is taken away then dumb and silent we may be led, like sheep to the slaughter.” George Washington.

Freedom of speech under attack again, buy guess who? So what’s to dislike about a few cartoons? 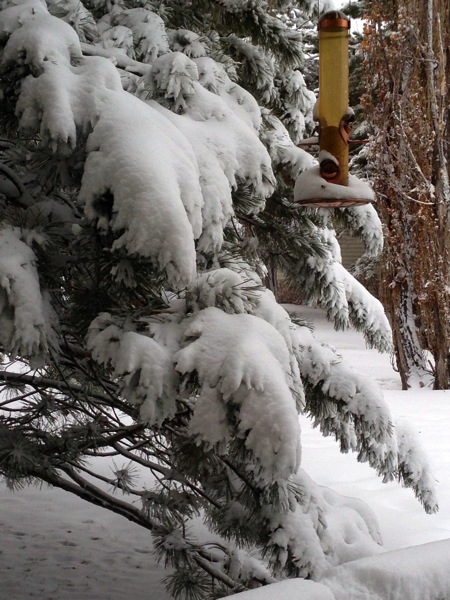 Some Lib Dem geezer has managed to stir up a shit load of rhetoric, blasphemy claims, attempts to limit free speech, hatred, toys out of prams, threats and violence because of some cartoons depicting mohammed. Yet, now I’m such an authority on the Quran I can say that nowhere in there does it ban images of Mo. In fact in Shia wing of the religion muslim images are quite common. So why all the man made fuss about it.? But thankfully they’ve shot themselves in the tea towel yet again, as this has promoted a great cartoon site I certainly wasn’t aware of called Jesus and Mo. The idea of the site is a simple one: the two religious figureheads J Christ and Mohammed share a house and discuss matters of religious philosophy, often in arguments with a wise atheist barmaid at their local. It’s well worth a look.

So yet again freedom of speech and expression is under threat from a small minority of religious fruit cakes from the religion of peace. Why do we need blasphemy laws? Surely a supreme being / god / flying spaghetti monster is capable of defending his or her own honour.

Anyway to defend free speech, before it’s too late, and to help these fundamentalist 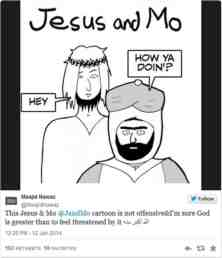 fruitcakes with their severe mental health problems here’s my desensitising therapy. A copy of the cartoon and a link to a really funny website Jesus and Mo – enjoy. I certainly will.

Powder alert received early morning. I’m happier than a nerd with a Raspberry Pi. Up on the slopes for 09:00. 9” of beautiful virgin white powder and most of it’s not been tamped down. It looks like a white out though, so take the cautious route and go for the easier runs. Jonesys awesome. 9” of virgin powder is more than enough. Sadly right ski seems to suddenly go slower than left ski, next effect is gravity takes over and I’m left chomping on fresh powder.

90 minutes of this powder and I’m cream crackered. Assessment is an easy Blue, usually takes about a minute to ski down. Not today, it’s a good 5 minutes worth. For the first time I even get a sweat on. Certainly changes the dynamics of skiing and makes you work 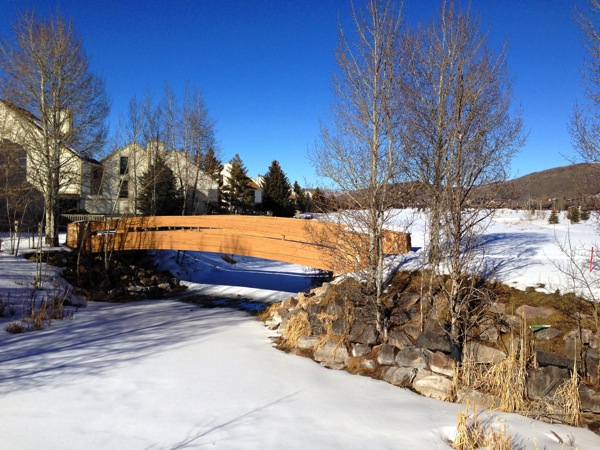 arder, mind you 6” of powder on top of your skis as well as trying to turn through 9” of powder, stretches them thighs. Awesome, this is what it’s all about. Praying for more snow. Have a well deserved coffee and then a few more runs.

Met Wendy for lunch at Payday Lodge, made an exception and had their Bison Chilli. Awesome.

Leisurely afternoon reading and watching the snow come down.

Then for tea we do the French thing and have bread and cheese. With a little wine. Sadly American cheeses all seem to be made of lightweight plastic, a mix between brightly coloured plasticine,  and putty, even their so called “Foreign Cheeses”

This is the life. Living The Dream.