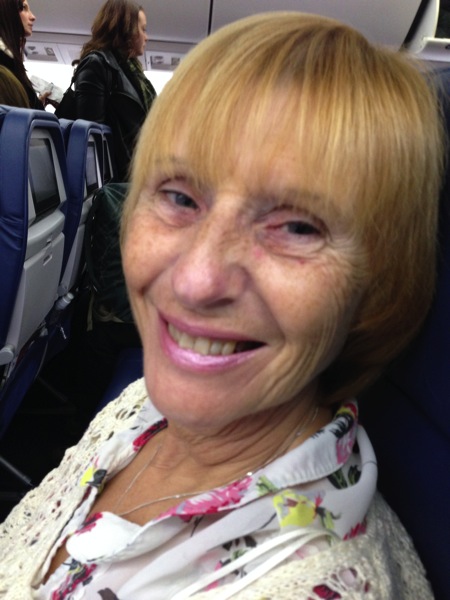 Yes we’re off on our great adventure to live the dream. 3 months skiing and living in Park City, Utah – the greatest little town in America, a veritable Sodom and Gomorrah in the midst of Mormon country. We’re renting a house for 8 months in my favourite town. Unfortunately with Visa, travel insurance and home insurance weasel words we have to come back every 90 days. So we’re back to sunny Belthorn in April, couple of weeks in France early May, then back out to PC for summer in the mountains June, July and August.  My dream. Awesome.

Manchester airport so much more relaxed in winter but still the usual crap and lobotomised, uniformed, little hitlers. But cheerful check in girl (not PC I suppose) and bacon butty man were the best thing about the airport. Someone, she shall remain nameless, had put a load of energy bars in my rucksack. Boy did that confuse the Xray geezer. Strip search me haversack, any moment now I can hear the sound of the rubber gloves slapping on!

Delta have changed our flight coming back. Flight arrives at 19:30 and next flight takes off at 19:05. Some mathematical genius there. Mind you at least they’ve given me 3 months notice so that I can train to be a Time Lord. That’s coming back so who cares?

Flight from Manchester to Atlanta was good, adequate leg room, just about tolerable, excellent service and they all smiled and seemed to enjoy their work.

Atlanta, well. What can you say. 40 minutes passport control and then 25 minutes TSA underwear scanning, peeving and long term sterilisation. Why we have to go through security again, only the Flying Spaghetti Monster knows. Perhaps they think the Delta flight crew were dishing out explosives and running bomb making classes on the flight over. Just more TSA madness.

Short drive up to Park City and we’re home.

Good news. A new study shows that drinking coffee is not bad for you. In fact, moderate coffee consumption appears to be mildly protective.
Based on this and other studies the most effective “dose” is two to five cups a day. More than that and any benefits drop off. Sadly I don’t know who conducted the study – possibly Starbucks!

Up a 06:30, cooking a cup of tea for Wendy. Mortar round explosions rippling through the mountains, 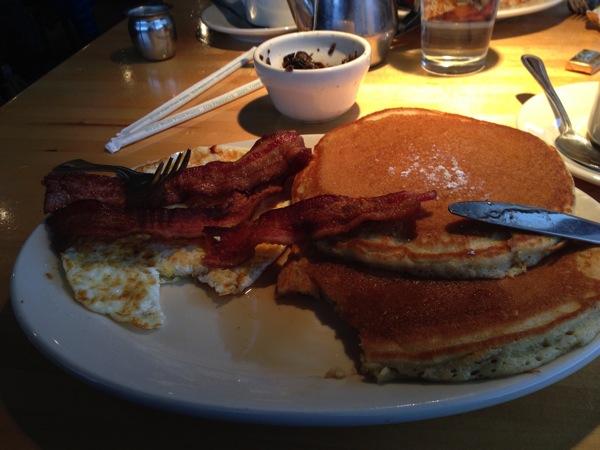 t’s either the Talibans attacking, or the Ski patrol out on avalanche control. Open the curtains to snow, snow, snow everywhere. It’s the proper stuff, none of that slush grey and black we seem to end up with. Mr Plough been out and done his job already. Roads are cleared, just a thin layer of compacted snow / ice, even our garage area is cleared.

Start the holiday with an all American breakfast at Squatters – awesome food.

Leisurely day getting settled in. 3 trips to Comcast to sort out Wifi. 1st they’re closed for lunch, that’s what you get employing French; 2nd no you need you’re property rental agreement to prove you exist – keh; 3rd terribly sorry computers down for the next 3 hours, by which time they’ll have pissed off home. Starting to make BT look good. Canadian customer summed them up when he said their service was totally crap in Canada and is just as crap here. That’s good quality control for you, consistency. Takes a lot of effort to be consistently bad. 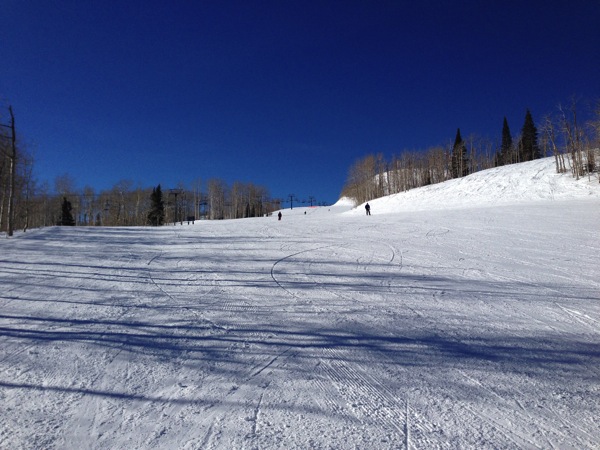 Wendy hits the supermarket whilst I take care of the important things. State liquor store to get some essential supplies; bank to get some dollars to pay rent. Ask how much I can draw out? “As much as you have in.” “what no daily limits?” “No it’s your money, why should we stop you spending it.” My sort of bank. 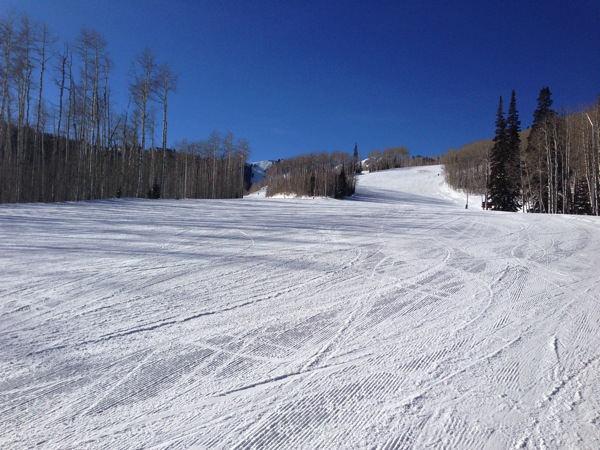 In the lift queue at 08:50 for the Eagle lift. May be a bit slow. May be a tad antediluvian – pre-dates Noah. But, it gets you to some of the best skiing quicker than doing the multiple hi-speed 6 packs that most tourists do. Yes, I’m a local this year.

Have a few runs to get back in the swing of things. Then meet up with Carol for a great bluebird mornings skiing.

Feeling very at home on these skies, just as if it was only yesterday I was on them. Then I have a couple of falls. Mind you given that it was like skiing in a war zone, with all the mortars going off to clear avalanches, it’s enough to make anyone jump out of their ski boots.

That’s it these new skis are going back. Well at least the left one is. It seems to be demonically possessed, about as obedient as a half brained spaniel. Why is it trying to copulate with the right ski? Two falls in one day is more than a full seasons worth. Embarrassing, especially the first, I was only doing about 2mph. If I’d have gone another foot before stopping a parachute would have been handy. 2nd was a tad more spectacular as I did an impression of a star fish sliding down a mountain.

Perhaps I should have done more than 1 days pre-ski exercises, rather than relying on 3 months 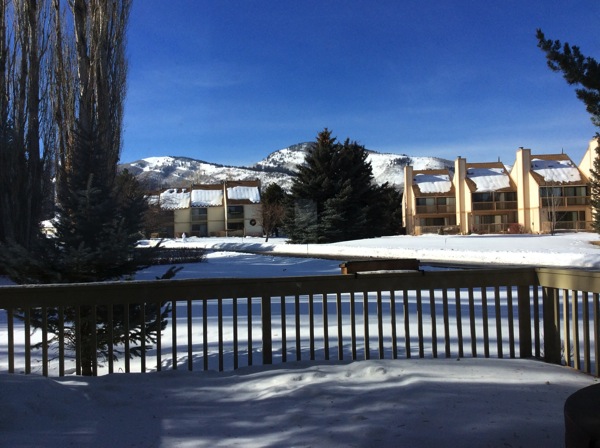 skiing to get fit. Who knows perhaps by March I might have full control of my left leg.

In the afternoon I take on the ultimate challenge to my sanity and ring Comcast to sort the TV and set up Internet. They obviously don’t want to be bothered with new customers, takes me 15 minutes to find a phone number. Abandon hope all you who ring this number. 3 calls, 4 people and 2 hours 15 later I’ve got it all set up – allegedly, although the proof will be Monday when I try and pick up the modem. By now I’ve totally lost the plot and the will to live. They are so bad I just can’t describe it. But at least now I know why they have a service called “Infinity”. It’s because their service is infinitely worse than any anyone else. That includes BT. Just imagine your worst BT nightmare experience and multiply it by infinity and you still don’t get even with a lightyears distance of how bad they are. Time to rattle a CEO’s cage. 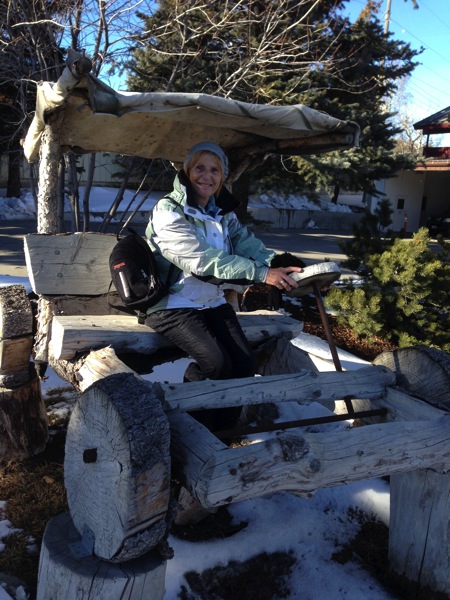 As we’ve got Comcast cable TV set up, it comes free with our new home, we decide to have a flick through the channels to see whats worth watching. By the time we’ve gone through all 950 channels it’s time for bed and we’ve found nothing of merit to watch.I think I’d rather watch the CBBeebies with a blindfold on and the sound on mute, than some of the wasted photons produced by some of the USA TV channels. The adverts are just another excess, but they’re that lengthy at least you can cook a 3 course meal during each interval.

Do a good imitation of a nesh, lethargic chicken and stay in. With snow, 30mph winds and gust up to 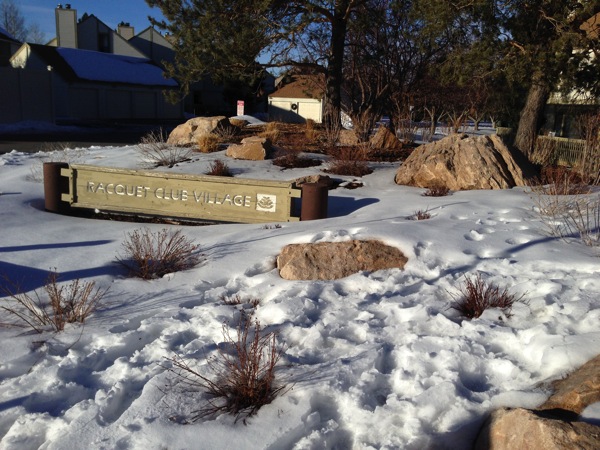 0mph there’s a good chance they’ll shut a lot of the lifts down, so I do the sensible but boring thing, stay home and win some browny points with Wendy.

After lunch Wendy tempts me to an alternate orgasmic excitement. A trip to Walmart and TJ Max . Somehow doesn’t compete with the excitement of skiing in a howling snow storm; swinging 100 foot up in a 6 man chair; being roped down when the chair stops because it’s too windy. Thank the Flying Spaghetti Monster (FSM) for iPhone and 3’s Feel At Home Service which means I can at least access As Much As You Can Eat Data here in the USA. Can even watch BBC from iPhone to ITV to main TV.

Monday – cold, windy and some snow round.

Do you ever wonder about the difficult life choices you have to make:

Option 2 – go to Comcast to sort internet (vitally important); then drive down to Costco for some orgasmic isle and trolley duelling; then Ikea. Have to do this today as tomorrow we are poor and car less.

Hang on there’s another option.

Option 3 – I go skiing and Wendy drives down to Salt Lake to do the rest. 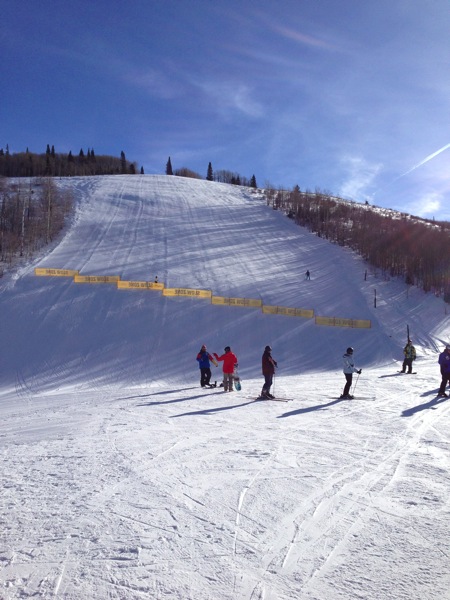 So which is it to be?

Go for option 2, wins me some extra browny points for my remaining 3 months skiing.

Start with Comcast. There at opening time to pick up a wifi modem. “I don’t believe it”, the lobotomised girl with the personality of a granite boulder (why would anybody employ anyone so miserable and uninviting) can’t get the storeroom open. Her key won’t work. I offer to break the door down for her but she’s not enamoured with the idea.

We’re going down to Salt lake so I’ll pick one up from their. What’s their excuse going to be? Turns out they don’t have one – unbelievable. At least the guy there has a personality and a brain so we discuss the pricing options and he manage to get $50 pm to $25, gives us a shed load more channels to flick through so we probably won’t get to bed until the early hours. But best of all set us up with a free, my sort of word, trial of all HBO for 3 months.

Then it’s off to Costco. Our account has been cancelled for some reason but assistant is most helpful 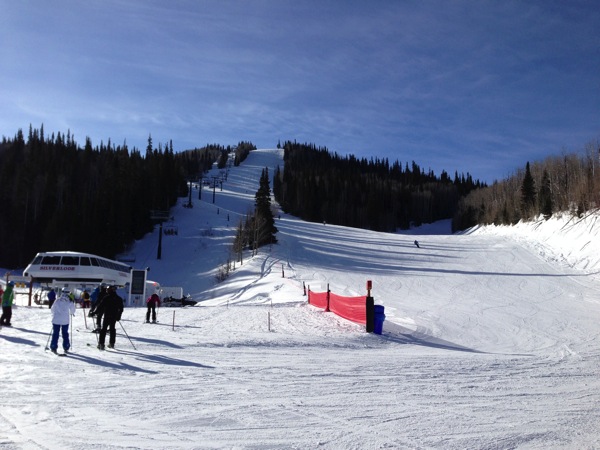 nd gives us a day pass. Wow what a place. It’s like Asda on steroids and very cheap. We stock up for 6 months on all the major consumable. Must work out about 30% cheaper overall than you best supermarket bargains. But alas they don’t sell tea. Finally manage to get our overloaded trolley to checkout. Come to pay and Wendy’s Master card not  accepted; plan B other master card rejected; plan C my master card rejected. Getting to be fun now. Plan D Chase Debit card – accepted. Obviously don’t like UK cards.

Then it’s off down to Ikea for a free Friends and family coffee and Wendy has some lunch. Unlike UK Ikea’s they have everything in we want – quite refreshing.

Call back into PC Comcast an pick up wifi modem and ADT box. They’ve finally managed to open the storeroom.

Evening spent setting up wifi and extended TV channels. Suffice it to say the saga continues. Instructions are wrong. Oh yes says the call centre lass, with a giggle, we get that a lot, they are confusing – soups spoons for breakfast if you ask me. 4 calls to “Help Lines”. Finally figure out they’ve given me a black ADT, when HBO needs a silver DCT. Oh well another chance to pop in for some stimulating banter with the granite boulder in the Comcast store.

Well we said it would be great to come and live here and experience America and Comcast has certainly been one of those experiences. If you think BT are bad then Comcast takes poor service to a whole new inter galactic level of unimaginable incompetence and frustration, just one visit / interaction generates enough material for a comedy show. I now understand where the Comcast genii in their marketing department came up with the Xfinity logo. Simple. It stars for take the worst possible service you can imagine and multiply it by  infinity and you have a measure of the quality of our service – Xfinity. I can feel a ranting ode to rattle the CEO’s cage coming on.