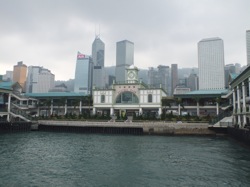 MTR and star ferry to Kowloon and do the open top bus tour. Today the place stinks with the smog and its sore eyes.

Then its the HK island bus tour. Stop off at the market in central. Like all the rest not really up to much. Catch the longest escalator in the world and visit a temple. More joss sticks and smoke than the already sore eyes from the smog can cope with. 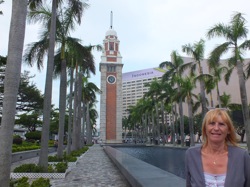 free afternoon tea before getting a taxi to Central catching Airport Express MTR back to the airport.

I have to say the MTR is very impressive, especially the airport express. Fast, clean, frequent, organised and pleasant. It’s a bit like Singapore the sub-terrainian Moorloks have it all. It’s only when you’re above ground amongst the Eloi that life is seedy and heaving. Some how I think thats not quite the way H G

Silly me. There I go again thinking I’m a customer and considering the amount of airport tax they are run for my convieniance. Arrive a tad early and of course check in desk is not open. You’ll have to wait a couple of hours. Oh by the way you could
have checked in at anytime today at Hong Kong central or Kowloon station. Of course my British Airways travel documentation doesn’t bother to mention this. Doesn’t it seem somewhat bizarre that here I am at the airport and have to wait but can check in elsewhere early. Common sense question – why can’t I check in at the airport early? Hello, I’m a customer! 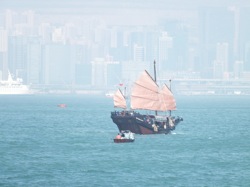 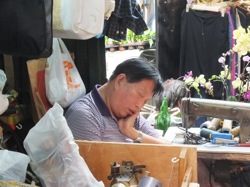 It really is about time someone got a grip on airports. A good case for some customer focus and process re-engineering.Not to forget that even though we’ve not left the terminal we’re screened yet again. Asked supervisor why and apparently its because the UK has different standards to HK. Wouldn’t expect all airports to get together and have a Worldwide standard. That would benefit the customer – heaven forbid. Lets feed a few airport bosses to the lions in the Saturday afternoon colosseum. 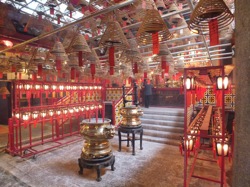 Well we’ve enjoyed our 3 days in HK and glad we’ve seen it. How people live in all these high rises amazes me. Certainly not a place I’d like to live in and it has the accolade of being so much worse than Belthorn it makes me really appreciate Belthorn. 8 million people crammed in is just unbearable. It’s the worst city we’ve visited, in places it is a 3rd world hell hole and yet in others is opulent and high tech. Stinking smog doesn’t help but thats probably why you see so many wandering around with masks on as if they’ve just come out of an operating theatre.

Certainly won’t be coming back despite the amazing hotel and swish MTR. 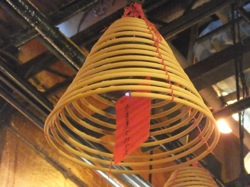 Meanwhile some tips on HK:

In the UK the sure fire way to find a Chinese restaurant is look for Chinese writing. Doesn’t work here.
They all want to push leaflets into your hand and then jabber away in Chinese, despite the fact that you’re clearly not Chinese – get used to it.
Just because they speak some English don’t assume they understand you. They don’t.
If you go to the gents get used to the revolting sound as they have to gob before they pee.
They can’t walk in a straight line.
There is no concept of personal space.
Don’t point at people it’s considered very rude.
Littering above ground may be acceptable but no one eats, drinks or litters the MTR.
If they accept credit cards, you’re in luck, it’s polite to pass it to them with both hands.
Don’t eat the fish unless you know it’s come from abroad. Local seafood can be heavily polluted.

And just in case you thought all religious intolerance had ceased, or I’d suddenly gone all pious, how about this:

Imagine the scene: a young man is led away in handcuffs to begin a prison sentence as his mother is left crying in the courtroom. He is 19 years old, has a good job, has no previous convictions, and has never been in trouble before. These facts cut no ice with the judge, however, as the crime is judged so heinous that only a custodial sentence is deemed appropriate. The young man in question was found guilty of singing a song that mocked and ridiculed a religious leader and his followers.

So where might this shocking story originate? Was it Iran? Saudi Arabia? Afghanistan? Perhaps it was Russia, a variation of the Pussy Riot saga, without the worldwide publicity? No, the country in question is Scotland and the young man is a Rangers fan. He joined in with hundreds of his fellow football fans in singing ‘offensive songs’ which referred to the pope and the Vatican and called Celtic fans ‘Fenian bastards’.