Sunday – hot and sunny yet again. Abandon breakfast on the deck as it’s too hot – mind you we’ll have the same 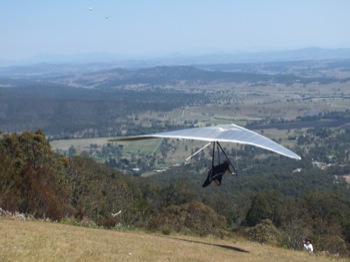 problem on my new decking back in Belthorn no doubt:-7.

Nip to the Sunday fruit and veg market. All of one table selling some rather ropy looking veg and no fruit.

Never mind next stop the Tamborine historical society is open today so that’s the next stop. A tad disappointing so we don’t bother. 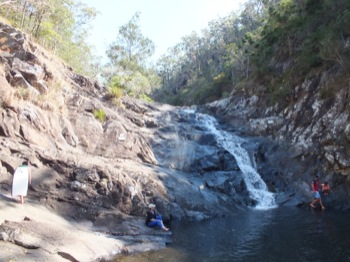 Next stop Cedar Falls, thats if we can find it. Finally track it down. Take our lavish picnic but all picnic tables are occupied. It seems like there’s some Germans around, no it’s not

towels, but picnic table ready set and no one around. Bugger that we go and use it.

The walk down to the falls and the pools has some lovely views and  youngster are out enjoying themselves. Another lovely little National Park in the rain forest. Wendy just loved the lizard lumbering bow legged down the path, testicle dragging along.

Why do we and the USA keep sending billions in aid to these tripe hounds in Pakistan.

“As Obama runs ads in Pakistan apologizing for free speech, Pakistan Minister offers $100,000 reward for death of US filmmaker”. 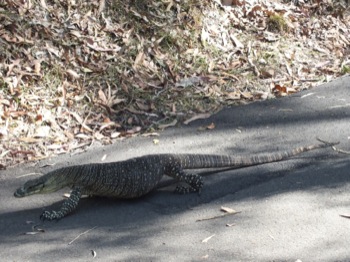 If our politicians can’t stop frittering away money we don’t have then I suggest we send them to Pakistan to calm the rioters – it’s just goldfish for jam jars.

Let’s hope the Ozzies don’t throw a muslim and get offended by my Oz jokes:

“If it takes an IQ of 60 to tie shoelaces, why do so many Australians wear thongs”?

“Why do so many Australian men suffer premature ejaculation? Because they have to rush back to the pub to tell their mates what happened”!

Breakfast on the balcony. All the Gold Coast is under a blanket of cloud but up here we’re above it all and it’s 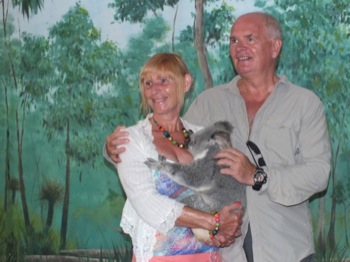 Drive down to pick Pam up and it’s off to the Gold Coast Wild Life park. Visit a few beaches on the way. By the time we get there the mists lifted and it’s a hot sunny day.

The parks great. Allows you to interact with animals such aKangaroo’s and for a small fee you get to have a picture with a Koala Bear. Although they seem a tad reluctant to let you pet their 5 Metre salt water crocodile. The Kangaroos are amazingly friendly and they don’t even seem to get upset with people petting their Joey in their pouch. 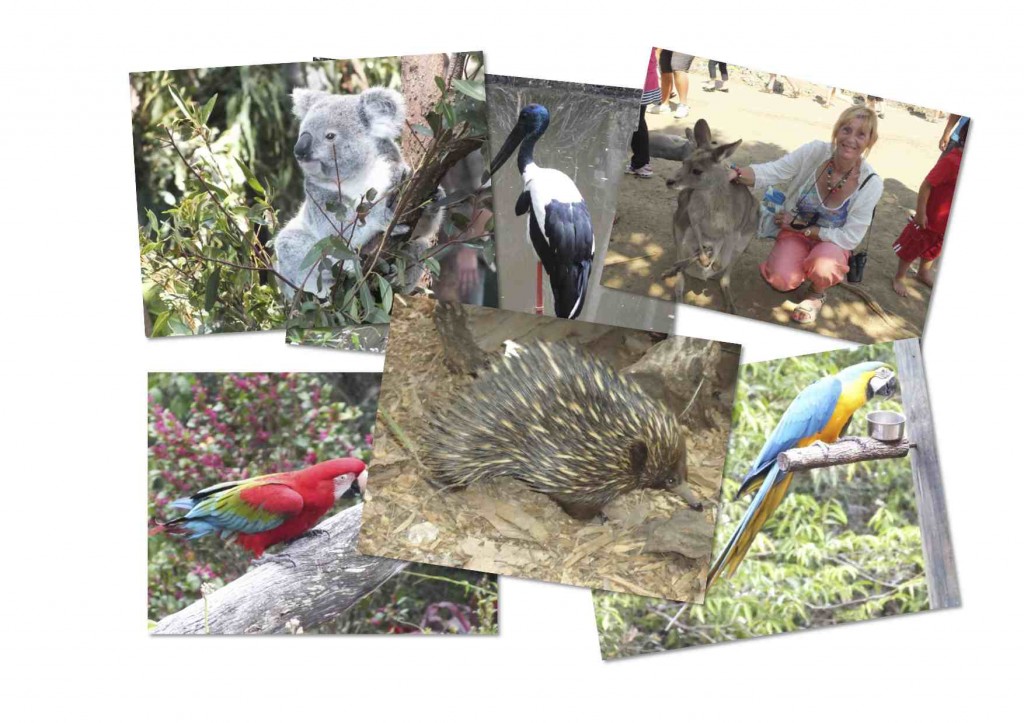 I think I’ll just let the pictures speak for themselves. A great day and we just manage to leave before a thunderstorm rolls in.

“On September 18, 2012, Muhib Ru’yat Al-Rahman, a senior writer on leading jihadi forum Shumoukh Al-Islam, suggested that Muslims living in Denmark, Germany, the Netherlands, and the U.S. kill Westerners and display their decapitated heads along roads with a statement reading: “This is the punishment of those who insult our prophet.” 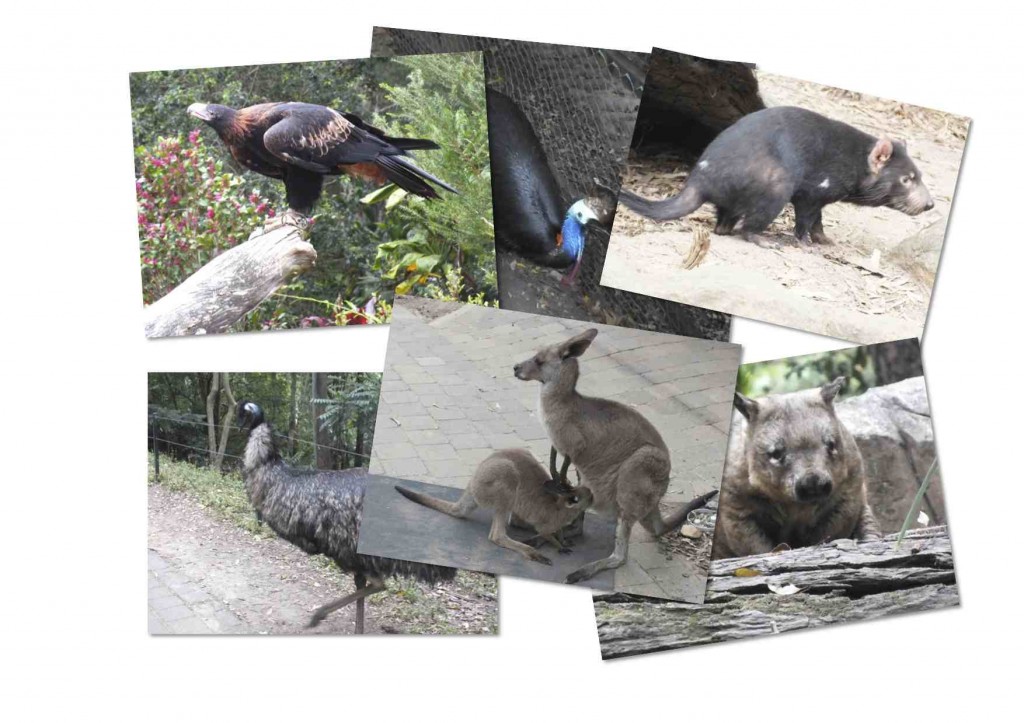 Why do people go to other countries and expect that country to change to accommodate them? If what they want was so good why don’t they stay where they were?

“Today in New York City was the Muslim Day Parade, where Muslims protested against blasphemy and for the imposition of the sharia in America”. 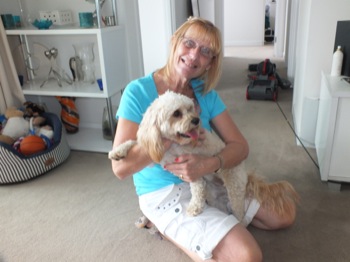 Drive down to Pam’s for our first Ozzie barbie. They have these free barbie units in the apartment block so you don’t need to light a fire and suffer the smoke and flames.

A very pleasant afternoon with Pam and Peter and of course Misha enjoying every minute of it. It’s a Cavapoo or in Ozzie lingo a Cavoodle, sounds a bit kinder on your carpets. Wendy wants one.

Wendy and Pam go off to the ladies afternoon while I manage to do a bit of work – boohoo:-(.

“The Maldives has moved to ban dancing in public between men and women, an official and a report said, confirming the influence of the nation’s extremist muslims”.

Never mind perhaps homosexuals dancing together is to be promoted. Now there’s a muslim world first. Notice the lower case m do you think this will cause more riots in the muslim world?

“The cook and I had a fair suck of the sav, ropeable and were just spewin when we made a blue and vegged out to watch  “The Estate”, about these dole bludgers, rorting the system, chucking sickies all just a load of mongrels not a days yakka between them. Made me want to chunkier. We were rapt to see one guy stand out like a shag on a rock as a bastard battler”.

And now for something  Non PC:

A tourist is driving along in the outback when he hits two Abos who are crossing the road.  One crashes through the windshield and into the car, while the other bounces off the fender and staggers off into the bush. A local cop turns up and calms down the hysterical tourist. “Don’t worry mate. We’ll have the one that came through your windshield arrested for breaking and entering, and the other bloke arrested for leaving the scene of an accident.”

Up at the crack of dawn; drive to station and catch the express train into Brisbane. I think express has a different meaning in Oz.  Only 100 minutes to travel 40 miles – thank god  we missed the slow train – I think they must have an on board funeral service.

Pass on the Brisbane hop on off bus tour and do a free walking tour. Very interesting all the history, information and stories about Brisbane. 3 hours and amazing it was free.

Have a walk around south bank and a late lunch there. Very pleasant and vibrant. 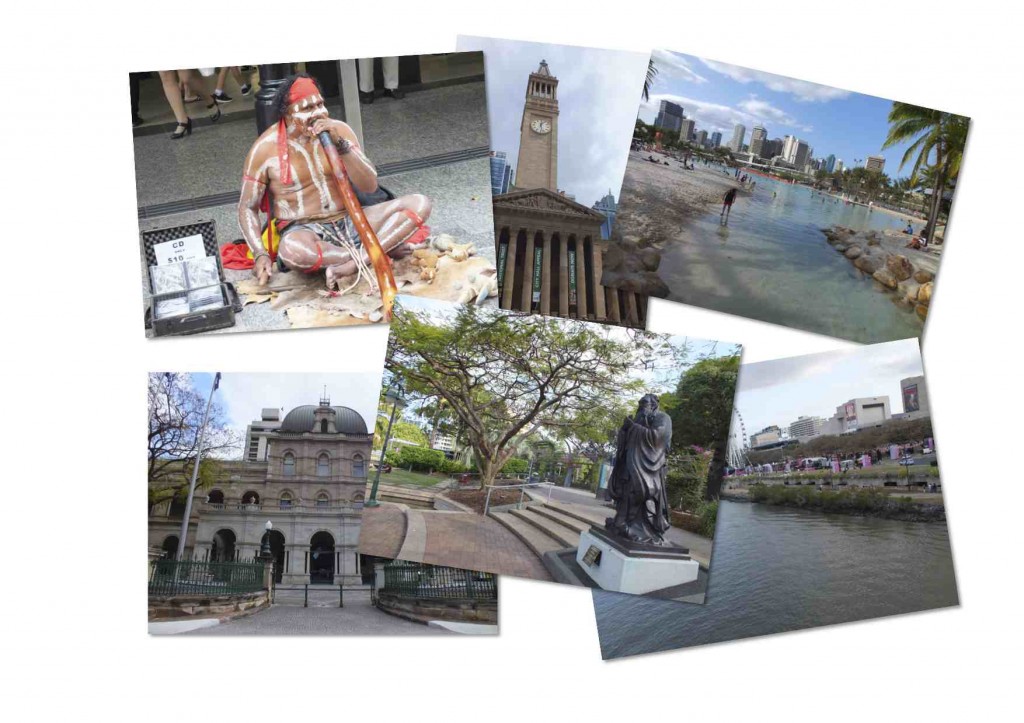 After 5 hours “our dogs were barking”, we’ve seen  enough. Catch our 2nd express train back along with all the commuters and iPhone brigade. If you can’t beat them join them so I get my blog done but somehow I really can’t seem to master this thumb tie pin. Must be an age thing.

Brisbane was ok. Glad we’ve seen it but one days enough of any big city is enough.

Long drive back up the mountain, yet again. Nice bottle of Oz Merlot to finish the day.

An abo goes into a pub with a parrot on his head.
The bartender looks at him and says, “Where did you get that?”
The parrot said, “There’s plenty of ’em out in the bush!

Q: What do you call an Abo with dandruff?

A: A Lamington (Australia’s famous squares of sponge cake dipped in chocolate glaze and then in coconut)!

This ones a bit deep:

While waiting to finalise their Australian residental status, two Afghanistani men start chatting. As they part, they agree to meet in a years time and see who has adapted better to the Australian way of life.
True to their word, they meet after the year is up. The first says to the second “We have integrated so well…yesterday, I ate a meat pie and drank a VB while watching my son play Aussie rules”
The second man replies “F**k off, towelhead”

“The wife and I were outraged, annoyed and ready to throw up when we made the mistake and sat and watched the TV programme “The Estate”, about these scroungers on the dole, ripping off and exploiting the  benefit system, skiving all just a load of scrots with not a days work between them. Made us want to throw up. We were pleased to see on guy who was the exception, a good guy working hard for very little pay”.